Here's a long-term growth story at a depressed price.

All of Shake Shack's (SHAK 4.21%) restaurants are either closed or limited to takeout and delivery business. Not surprisingly, the stock is down over 30% from its February pre-coronavirus high.

But Shake Shack, one of the most beloved restaurant chains out there, has very attractive new restaurant economics and a big opportunity to open more locations long term. And it now has plenty of cash to weather the storm.

Shack Shack has a great business model. The company has average restaurant sales, also known as average unit volume (AUV), of about $4.1 million per year, which is among the very best in the quick-service or fast-casual restaurant categories. The only restaurant concept in its category that is higher is privately-held Chick-fil-A, which had a $4.6 million AUV in 2018. 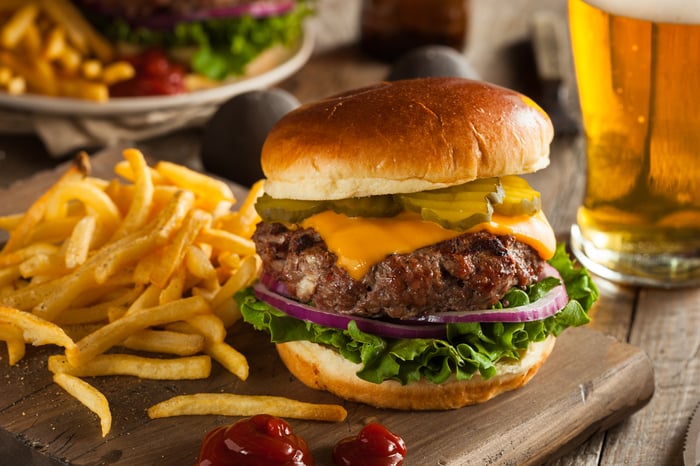 Part of the reason for that is the company's origins in New York City, the media capital of the world. Getting started in New York with its first restaurant in Madison Square Park has given the company loads of free media exposure, which has amplified the brand.

Ever since Shake Shack's initial public offering in 2015, management has said it was targeting 450 domestic company-operated restaurants over the long term. At the time of the IPO, that was a lofty goal considering the company had only 31 U.S. locations.

Today, the company has 163 domestic company-operated restaurants, so there is still a large opportunity ahead to reach management's original target, but it also seems likely that the company will surpass that goal. For one thing, 450 restaurants is not very many for an extremely popular and successful restaurant concept. Panera Bread, Chipotle, and Chick-fil-A have well over 2,000 restaurants each. Five Guys is estimated to have over 1,200 locations.

Shake Shack's stock price is heading higher, because it has been beaten down so much. Certainly, the coronavirus shutdowns are causing severe disruption to all retailers and restaurant companies, and Shake Shack is no exception.

The company has been forced to take extreme measures to survive. On March 16, management shifted Shack Shack to an entirely "to-go" model at all of its domestic company-operated restaurants, eliminating dine-in options, and withdrew its previously provided full-year financial guidance. Then on April 2, the company provided a business update that indicated that same-store sales in March were down 29%.

But the company is going to survive. On April 17, management provided preliminary first-quarter results that indicated the company, after having executed furloughs, a hiring freeze, salary reductions, and other measures, was burning $1.3 to $1.5 million of cash per week. At the time, the company had $112 million of cash on hand, but it also announced a $75 million "at-the-market" equity offering and a traditional $150 million equity offering. Assuming it issues the full amount of the at-the-market offering, Shake Shack could theoretically operate for over four years before running out of cash even if circumstances don't improve at all.

While it will take some time, business conditions for Shake Shack should only improve from current levels. Given the company has the balance sheet to survive, it's only a matter of time before investors begin to more fully price in the company's recovery and long-term prospects. With the stock still down about 34% from its February high, investors should expect the company's shares to head higher.