Taco Bell is also recognizing Cinco de Mayo by launching a meal kit on May 1.

Chipotle Mexican Grill's (CMG 2.09%) latest advertising promotion highlights Cinco de Mayo, the upcoming May 5 commemoration of Mexican forces over Emperor Napoleon III's French expeditionary force at the Battle of Puebla in 1862. The extras offered to customers include free delivery and free food on certain orders, supplemented by a TikTok challenge.

Part of the promotion consists of free delivery on all Chipotle orders totaling at least $10, up to a maximum of $200. This free delivery is already available today, April 30, and will continue through May 10 during normal business hours. 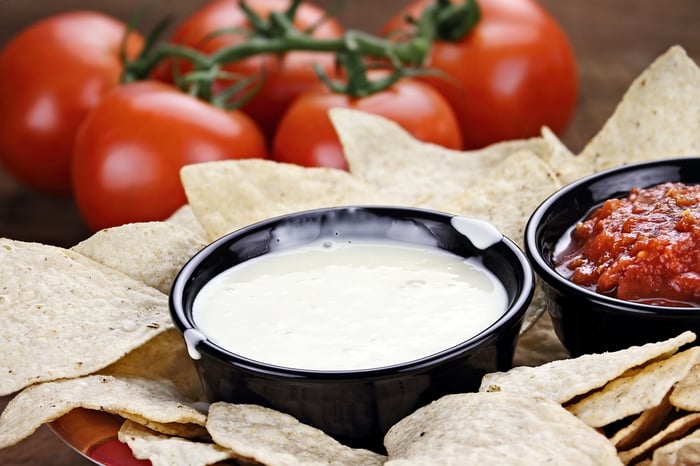 On May 5 itself, and only on that day, any order between $10 and $200 which is placed using the code "QUESO55" during checkout will have each entree item topped with "queso blanco" topping at no extra charge. The white cheese topping is making a reappearance on Chipotle's menu and garnering very positive reactions, unlike a previous queso offering in 2017 which some people termed "a crime against cheese."

Neither promotion applies to purchases of Burritos by the Box, or for catered events.

The company is also launching a #ChipotleSponsorMe challenge on TikTok, enabling fans to compete with brief creative videos explaining why they should be recipients of a "Chipotle Celebrity Card." Five such cards will be handed out, providing the winning fans with public recognition and "free Chipotle."

Competitor Taco Bell, a subsidiary of Yum! Brands (YUM 2.11%), is also marking Cinco de Mayo this year, with the release of a $25 meal kit named the "At Home Taco Bar." The kit is intended to feed six people, and includes 12 taco shells along with other ingredients. The company invites purchasers to share their culinary creations via #TacoBellCreations.