The stock market gave up ground along with the airline sector, but some investors still think there's money to be made from air carriers.

The stock market gave up ground on Thursday, but that wasn't enough to take away from what was an amazingly positive month for stocks in April. Even with the day's declines, the Dow Jones Industrial Average (^DJI 0.35%) finished the month with a gain of more than 2,400 points, or 11%. The S&P 500 (^GSPC 0.67%) and Nasdaq Composite (^IXIC 0.98%) posted even larger gains of 13% and 15%, respectively, reflecting the optimism that investors have adopted by looking at the market's future.

Airlines, in general, saw even bigger losses today than the broader market. Yet they've continued to draw interest from investors, and that's helped them raise capital that might prove crucial in weathering the difficult conditions they'll likely face for months to come.

What investors are buying

However, we've continued to see interest from institutional investors trying to pick up good deals in working with airlines. Today, Delta raised $3.5 billion from selling five-year notes, more than doubling the initial size of the offering from $1.5 billion. Participants in the private offering were happy to buy the secured notes, which don't offer any equity conversion rights but do include collateral in the form of various route slots, airport leases, and international flight-operation rights. An interest rate of 7% was certainly an enticing kicker for bond investors. 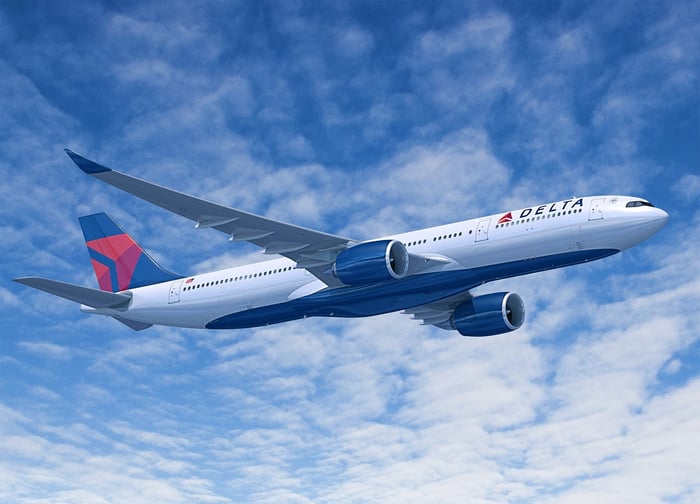 Delta's experience follows Southwest's move earlier this week to raise capital on its own. Southwest also boosted the size of its offerings, ending up raising $4 billion. Half of the money came from a secondary stock offering, while the other $2 billion came from convertible five-year notes paying 1.25% and offering conversion at a price about 35% higher than the stock price.

Cash has never been more important

The need for liquidity is obvious, and American made it even clearer with its quarterly results. The airline posted a first-quarter loss of $2.2 billion and says it's burning about $70 million on cash every day so far in the second quarter because of the near-standstill in travel activity. CEO Doug Parker warned that investors shouldn't expect a V-shaped recovery for airlines, saying that, "[R]ecovery will be slow, and demand for air travel will be suppressed for quite some time."

Not all airlines should expect equal treatment from institutional investors. Delta has a strong reputation among business travelers, while Southwest has cost advantages and doesn't have the same exposure to international travel that its big-airline peers have. By contrast, American and United face some unique challenges that could make it more difficult for them to raise further capital on favorable terms.

At this point, it's still unclear when airline stocks will see industry conditions return to something resembling normal. It's good that investors are still willing to put money into the sector, but the businesses still have to perform better before too long or else further liquidity could dry up quickly. If you're looking at buying shares of airlines, you have to be comfortable with all that risk -- and also be willing to accept the fact that institutions can get access to types of investments that you might not be able to buy.