Please ensure Javascript is enabled for purposes of website accessibility
Log In Help Join The Motley Fool
Free Article Join Over 1 Million Premium Members And Get More In-Depth Stock Guidance and Research
By John Rosevear - Updated May 1, 2020 at 4:15PM

After beginning the week with a 33% rise, shares of retailer Signet Jewelers (SIG 6.24%) gave some of those gains back on Friday amid a broad sell-off of retail stocks. The drop came despite Signet announcing plans to begin reopening stores over the next week.

Signet said on Friday that it will begin reopening some of its U.S. jewelry stores on Monday, as some state and local authorities begin to ease restrictions on nonessential businesses that were imposed in March to slow the spread of COVID-19.

Signet said that it plans to have 118 stores open to some degree by the end of next week. Some shops will be open for pickup only, it said, and some will have a new curbside concierge for services like repairs and resizing. All surfaces in the stores that are fully open will be wiped down frequently, and retail employees will be wearing masks and gloves to protect customers, the company said. 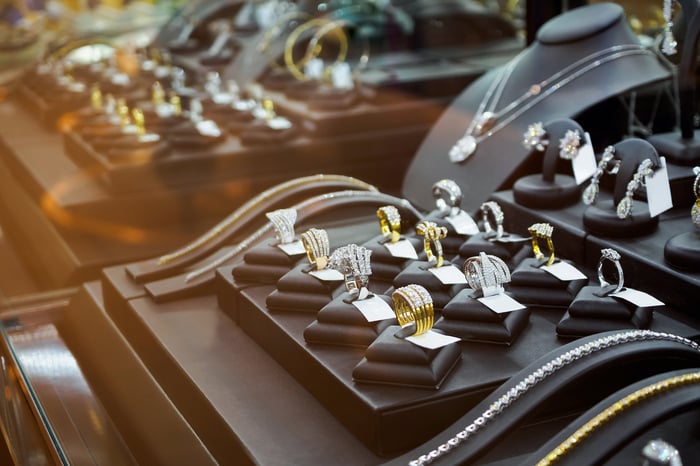 To a large degree, Signet's fortunes are tied to those of malls in the U.S. As the owner of several familiar jewelry chains, including Zales, Kay Jewelers, and Jared, it operates roughly 3,300 stores and kiosks, about 2,600 of which are in the U.S., and nearly all of which have been closed since mid-March.

It was no surprise when Signet's stock price rose sharply earlier this week, after mall operator Simon Property Group (SPG 0.83%) said that it plans to reopen 49 of its U.S. malls and outlet centers by next Monday, May 4. Those locations include 16 of Signet's stores, all of which plan to reopen.

Reopening 118 stores is better than not reopening any, of course, but it's only a small fraction of Signet's total locations. It may be several more weeks (or longer) before the company can fully reopen and assess the state of its business as the pandemic fades.

Retail-focused investors can look foward to an update in the not-too-distant future. While Signet hasn't announced a date for its fiscal first-quarter earnings report, it typically releases it in early June.

Why Signet Jewelers Was Climbing Today