Shares of Zoom Video Communications (NASDAQ:ZM) have been on an absolute tear since it went public last year, easily outperforming broader markets. But Zoom Video's staggering gain in the last year has also dramatically increased the stock's current valuation, and the company's ongoing security issues and rising competition might drive Zoom shares lower in 2020.

The COVID-19 pandemic has inflicted a great deal of pain on the global populace as well as investors. The dreaded virus has now infected more than 3 million people and caused more than 200,000 deaths worldwide. Governments have announced countrywide lockdowns and shut their borders. This has resulted in business closures and a massive decline in consumer spending, decimating most industries.

However, a majority of the global workforce is now working from home, and this trend has increased the demand for Zoom's collaboration tools at a significant pace. 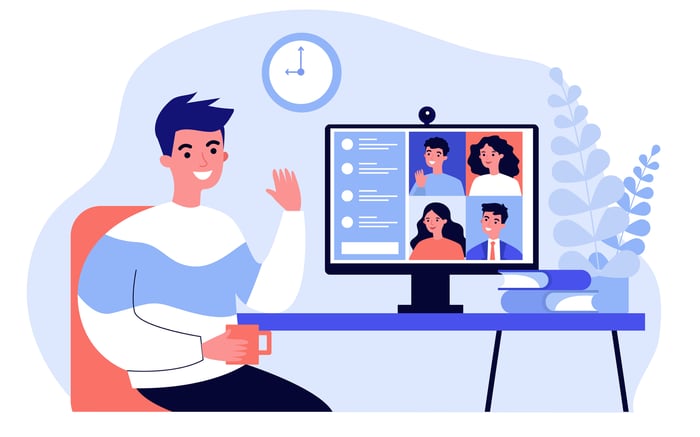 This massive surge in users has sent Zoom Video Communications stock sky-high. However, the company is grappling with security issues as multiple reports suggest that Zoom's default settings have been less than secure.

Pranksters were able to disrupt various Zoom meetings, an unwanted intrusion dubbed "Zoom-bombing." Many schools and educational institutions are holding classes online, which meant underage students have been exposed to malicious and harmful content. Large enterprises, including tech giants such as Alphabet's Google, have since stopped using Zoom applications to conduct meetings.

Zoom did not forecast this sudden uptick in users, and it released a statement acknowledging these privacy issues. Zoom stated:

For the past several weeks, supporting this influx of users has been a tremendous undertaking and our sole focus. We have strived to provide you with uninterrupted service and the same user-friendly experience that has made Zoom the video-conferencing platform of choice for enterprises around the world, while also ensuring platform safety, privacy, and security.

It added, "However, we recognize that we have fallen short of the community's -- and our own -- privacy and security expectations. For that, I am deeply sorry, and I want to share what we are doing about it."

Zoom has since taken measures to improve its platform's security, but these concerns might still keep investors wary.

Zoom will find it difficult to sustain user growth

Zoom is unlikely to maintain its robust user growth in the coming months. The COVID-19 pandemic is likely to be a near-term tailwind, but people will start going back into offices and schools once normalcy resumes.

Zoom also competes with several other technology giants in the collaboration segment, including Microsoft's Teams and Cisco's Webex. Other top players include LogMeIn, Adobe, and Google.

On April 29, during its earnings call, Microsoft claimed that Teams has over 75 million daily active users, or DAUs. Google Meet, on the other hand, is gaining 3 million DAUs every day and topped the 100 million mark in terms of meeting participants.

Even peer collaboration companies have experienced a massive surge in user growth, thanks to the transition to work from home and online education. While there is enough room for multiple players in this fast-expanding market, Zoom might find it difficult to compete with the increasing completion -- especially when more and more large, well-funded players seek to enter its market.

Earlier this month, telecom giant Verizon announced it's looking to acquire BlueJeans Network, another enterprise-facing video conferencing platform. The Wall Street Journal reported that Verizon will pay around $500 million for the acquisition. BlueJeans claims several business behemoths as its customers, including Intuit, Facebook, and ADP.

On April 24, social media giant Facebook launched Facebook Rooms, a video live-chat service. Facebook Rooms will allow up to 50 people to simultaneously conduct calls, and it can be accessed from all its social media platforms. Facebook already has an engaged user base at the global level, and it may be successful in converting them into video conferencing customers.

Several of these companies are much larger than Zoom and have enough resources to spend on customer acquisition or marketing. A majority of them have multiple business segments and can easily convert customers of legacy businesses into paying customers for their new portfolio of products.

Zoom has successfully captured the public imagination with its user-friendly application, driving exponential growth in 2020. But major collaboration companies will also look to add features over time and can continue to gain market share.

While Zoom Video has been hit by security issues, the larger companies are unlikely to compromise on user data. In April, Microsoft Teams confirmed that it would not sell customer data for advertisements and will encrypt video calls to protect against cyber threats.

Its too early to know whether Facebook can gain market share in the collaboration space, However, Microsoft and Cisco are well-positioned to do so. Although Zoom is a clear market leader in web conferencing, Cisco and Microsoft continue to lead the global cloud collaboration market, according to Synergy Research

Furthermore, most of Zoom's explosive growth in daily active users isn't coming from paying subscribers. This means Zoom will have to successfully monetize a portion of its free subscribers into paid ones to keep investors interested and ensure top-line growth. 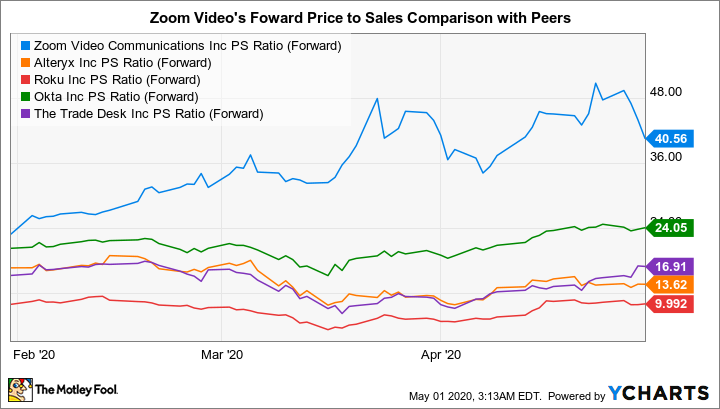 Zoom's amazing run in the last year has sent its valuation skyrocketing. Analysts expect company sales to grow by 49.6% to $931.4 million in fiscal 2021. This means Zoom is trading at a forward price-to-sales multiple around 41 -- vastly higher than even fast-growing tech stocks such as Roku, Alteryx, Okta, and The Trade Desk. Growth stocks tend to trade at a premium. But with such a huge premium over similar fast-growing tech stocks,, Zoom Video might find it difficult to sustain these valuations.

Zoom Video Communications is a top player in a high-growth market. However, I just think the stock will move lower in the next few months, given the entry of large players in the collaboration space, its soaring valuation, and its own potentially unsustainable growth rates.