Please ensure Javascript is enabled for purposes of website accessibility
Log In Help Join The Motley Fool
Free Article Join Over 1 Million Premium Members And Get More In-Depth Stock Guidance and Research
By Adam Levy – May 3, 2020 at 12:10PM

The new program misses the mark in Walmart's ambitions to take on Amazon Prime.

Same-day grocery delivery is hard to come by these days, as Walmart (WMT -0.66%) and Amazon (AMZN -1.37%) have seen a surge in demand for their speedy fulfillment options. Now you're lucky if you can get a delivery time slot within a week of ordering, if you can get one at all.

Amazon made the decision to put new customers looking to order through its Prime Now delivery service on a wait list while it increases capacity. Walmart, meanwhile, just launched a new service called Express Delivery. Express Delivery has been in the works for some time, but it could be particularly useful for customers who absolutely need their items today. For a $10 fee on top of regular delivery fees, Walmart will guarantee delivery within 2 hours of ordering.

Express Delivery will roll out to thousands of Walmart stores over the coming weeks, but it's an all-around poor response from Walmart to both Amazon Prime Now and the current economic environment. 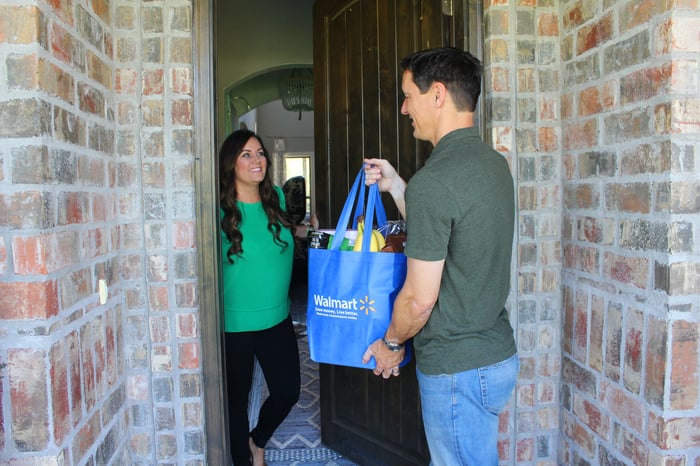 Adding extra capacity but only for those paying extra

Walmart says it now has 74,000 personal shoppers picking items in its stores for online grocery orders.https://corporate.walmart.com/newsroom/2020/04/30/walmart-introduces-express-delivery

The retailer added additional shoppers to support the rollout of Express Delivery, telling TechCrunch the new service "is being made available on top of Walmart's existing grocery pickup and delivery capacity." That's a ridiculous claim, however, considering a shopper for Express Delivery could just as well fulfill orders for Walmart's standard grocery-delivery service.

Requiring customers who want or need faster delivery to pay for it is one solution to an economic problem, but it's only a short-term win (if a win at all) for Walmart.

Those who can most afford to pay for faster delivery are wealthier shoppers who already likely have an Amazon Prime account. More than half of Walmart's top-spending families are already Prime members, according to Recode's Jason Del Rey. They may opt to pay for Walmart's faster delivery when they're in a bind and there's no availability on Amazon, but it's unlikely they'll stick around when Amazon resolves its capacity issues.

Meanwhile, it reflects poorly on Walmart at a time when 30 million Americans have suddenly lost their jobs. Walmart decided to accelerate the rollout of the program due to COVID-19, but it feels tone-deaf to charge consumers for faster delivery right now. In a more normal economic environment, the premium service would make more sense.

It's hard to beat Amazon Prime

Amazon has taken a more egalitarian approach than Walmart, working on a first-come first-served model. It established a wait list last month as demand surged, and it's enabling Prime Now orders for customers as it increases capacity. There's no additional fee for Prime Now, but Amazon isn't guaranteeing delivery within minutes of ordering either.

To be sure, Amazon is sacrificing profits with the approach. That's especially pertinent in light of its forecast to spend an additional $4 billion this quarter on COVID-related expenses. But it's building capacity and demand for a service that ultimately benefits its business. Amazon may lose money in the short term on grocery delivery, but if it gets more customers to sign up for Prime, it'll benefit in the long run from increased general merchandise sales and customer loyalty. It also further establishes Amazon as a source for groceries, a big area of interest for the company.

Amazon also offers shoppers on government benefit programs a discount on Prime membership. That said, Whole Foods pricing is generally much higher than Walmart's, so it still may not be as appealing of a service for lower-income families as Delivery Unlimited -- Walmart's grocery delivery subscription. (Delivery Unlimited subscribers still have to pay the $10 additional fee for Express Delivery.)

Walmart isn't willing to further sacrifice profits for increased customer activity on its digital platforms. That's a topic where management has butted heads before. The additional fee for Express Delivery may be appealing to some customers in the short term, but those customers are unlikely to stick around long term as many already have loyalty to Amazon. Meanwhile, it alienates its core customers who can't afford the service right now.

Amazon has shown the opposite approach -- catering to core customers and locking customers into Prime subscriptions -- generally works out well in the long run.