Please ensure Javascript is enabled for purposes of website accessibility
Log In Help Join The Motley Fool
Free Article Join Over 1 Million Premium Members And Get More In-Depth Stock Guidance and Research
By Harsh Chauhan – May 4, 2020 at 12:28PM

The chipmaker is looking to cash in on the next hot video gaming trend.

The novel coronavirus pandemic has given the cloud gaming market a shot in the arm. Online gaming services like NVIDIA's (NVDA -0.60%) GeForce Now and Microsoft's (MSFT -0.97%) Project xCloud have seen a surge in traffic as shelter-in-place orders and lockdowns across the globe have kept people confined to their homes.

So the COVID-19 outbreak could prove to be a blessing in disguise for the cloud gaming industry, which is still in its early phases of growth. Newzoo estimates that the cloud gaming market could clock a compound annual growth rate of 123% through 2023, generating $5.1 billion in revenue in an optimistic scenario. This could be a big deal for Advanced Micro Devices (AMD -0.13%), as the tech giant has been gradually expanding its reach in the cloud gaming space. 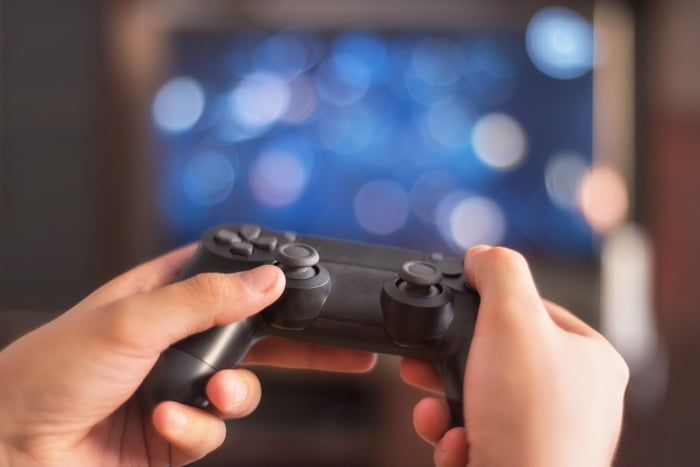 AMD has adopted a smart strategy to attack the cloud gaming opportunity. Instead of building a cloud gaming service of its own -- like what rival NVIDIA has done with GeForce Now -- AMD has been supplying hardware to the likes of Alphabet's (GOOG 0.02%) (GOOGL -0.01%) Google and Microsoft's Project xCloud streaming services.

When Microsoft announced Project xCloud back in 2018, it revealed that the company would deploy custom server hardware based on components used in the Xbox One console. AMD was the one making custom GPUs (graphics processing units) for the console then, which means that the chipmaker has been powering Microsoft's cloud gaming service.

Cut to the present, and it appears that AMD's relationship with Microsoft has strengthened. AMD has been selected to supply semi-custom GPUs for the Xbox Series X, set to hit the market this year. This indicates that AMD has deeply embedded itself within Microsoft's gaming ecosystem, and that could pay off handsomely in the long run, as demand for the software giant's game streaming platform has grown impressively.

Microsoft's Xbox Game Pass video game subscription service has more than 10 million active subscribers. The platform has seen a 130% jump in multiplayer gaming between March and April this year, and Microsoft is all set to use the existing strength of this platform to boost the Project xCloud game streaming service.

Phil Spencer, the head of Xbox, recently wrote in a blog that the company will start offering Project xCloud on Game Pass later this year. As a result, demand for AMD's cloud-optimized graphics cards could improve in the coming months.

Similarly, AMD is also supplying custom GPUs for Google's Stadia game streaming platform. According to a third-party report, the Google Stadia mobile app recently crossed 1 million installs since its launch in November last year. The app could be a good indicator of the platform's popularity, as it needs to be installed by a user to configure the controller.

Alphabet announced last month that it will be offering two months of Stadia Pro access to users for free. The move seems to have boosted the platform's popularity, as the Stadia app was installed a record 225,000 in one week after the service was made free.

All in all, the increasing popularity of Google Stadia and Project xCloud bode well for AMD's GPU business. More importantly, it will continue to push the envelope in this space, as its latest partnership suggests.

AMD also recently announced that it will be partnering with Oxide Games to improve the graphics performance of cloud games. Though AMD didn't share much detail about the multi-year partnership, its press release did make it clear that the two companies plan to make "tools and technologies for cloud rendering designed from the ground up to embrace the real-time demands of cloud-based gaming."

Oxide is known for its proprietary Nitrous Engine, which is specifically designed for cloud gaming. The engine currently supports the 64-bit Windows platform, and it aims to expand into Sony's PlayStation 4, Xbox One, and Valve's Steam OS, according to Oxide Games' website. The company also claims that the Nitrous Engine can deliver a 500% bump in CPU (central processing unit) performance and a 5x jump in graphics performance, and also improve battery life by a factor of three.

Though details about the partnership are sketchy right now, AMD may have made the right move by teaming up with Oxide. The chipmaker can boost its expertise in this nascent market -- the Nitrous Engine has been in development since 2013 -- paving the way for AMD to make a bigger dent in the cloud gaming space.