Please ensure Javascript is enabled for purposes of website accessibility
Log In Help Join The Motley Fool
Free Article Join Over 1 Million Premium Members And Get More In-Depth Stock Guidance and Research
By Dan Caplinger – May 4, 2020 at 11:30AM

Monday morning brought mixed messages from Wall Street, with investors in some industries remaining more optimistic about the future than investors in others. Many market participants focused on the Berkshire Hathaway (BRK.A -0.34%) (BRK.B -0.25%) annual shareholder meeting, at which legendary investor Warren Buffett talked for several hours about the history of the U.S. and the stock market as well as offering his latest views on the economy and the coronavirus pandemic. Shortly before 11 a.m. EDT, the Dow Jones Industrial Average (^DJI -0.11%) was down 228 points to 23,496, and the S&P 500 (^GSPC -0.20%) had lost 16 points to 2,815. However, the Nasdaq Composite (^IXIC -0.46%) had eked out a gain of 12 points to 8,617.

Buffett's most surprising comments centered on airline stocks, as the Berkshire CEO said that his company had liquidated all of its positions in the four biggest carriers. That sent shares of airlines falling sharply. Interestingly, cruise ship operators Carnival (CCL -6.04%), Royal Caribbean Cruises (RCL -1.78%), and Norwegian Cruise Line Holdings (NCLH -1.65%) didn't see nearly the same extent of losses, even though most of the things that Buffett said about airline stocks are just as relevant to their business models at sea. 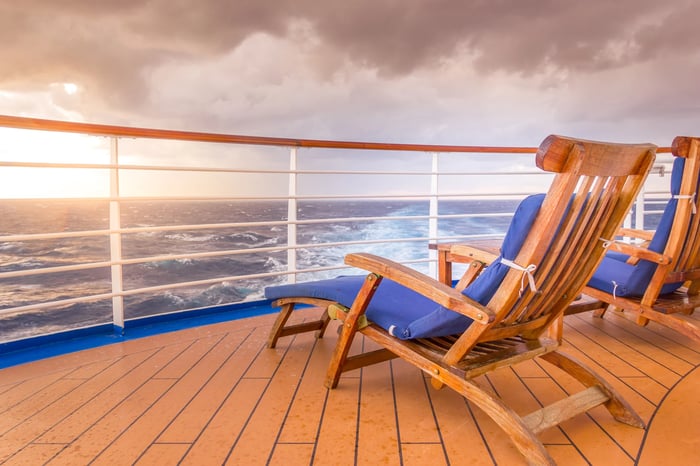 Buffett tried to explain that he hadn't lost confidence in the ability of airline management teams to do the best they could with the cards that circumstances had dealt them. But he pointed to the huge forces beyond airlines' control that will have a dramatic impact on what happens next in the industry. Moreover, given the substantial leverage among airlines with respect to owning and maintaining expensive fleets of aircraft, even a recovery to 70% to 80% of their former activity levels might not be enough to make their business models work again.

...but not so much for cruise stocks

At first, it looked like cruise stocks would follow suit. Carnival, Royal Caribbean, and Norwegian opened lower by 6% to 9%, but even as airlines remained mired in their losses, the cruise lines bounced back quickly. By 11 a.m. EDT, Carnival was actually up on the day, while Royal Caribbean and Norwegian saw losses of less than 1%.

One cause for optimism came from Carnival, which said it intends to resume service on a phased-in schedule beginning in August. Eight ships will sail from three different ports, two in Florida and one in Texas.

Yet in many ways, Carnival's announcement only showed how well the challenges facing cruise ship stocks line up with airline stocks' woes. The company canceled all of its other cruises through the end of August, and operating a reduced lineup of sailings won't do a huge amount to offset the expenses that are eating through Carnival's available cash. There's no easy way for cruise ship companies to sell off vessels when demand drops, leaving them holding the bag if the industry recovers only partly over the long run.