Please ensure Javascript is enabled for purposes of website accessibility
Log In Help Join The Motley Fool
Free Article Join Over 1 Million Premium Members And Get More In-Depth Stock Guidance and Research
By Nicholas Rossolillo - Updated May 4, 2020 at 12:15PM

That’s not to say there was zero disruption, but it could have been worse.

During the worst of the coronavirus market crash of March 2020, shares of Hasbro (HAS -0.18%) were down more than half from where they had been to start the year. The steep sell-off wasn't totally unwarranted. The toy-making leader's stock was high priced given its tepid sales growth following the bankruptcy of Toys R Us in 2018, and the company took on a lot of new debt to acquire toddler favorites Peppa Pig and PJ Masks parent Entertainment One.

But declines of that magnitude seemed overdone given the solid longer-term footing Hasbro has, so I started buying shares. After my first round of purchasing, CEO Brian Goldner said Hasbro's games were in "high demand" with families sheltering in place, and though Q1 2020 wasn't disruption-free, results could have been worse. I still think the stock is a buy.

Entertainment One (EOne) was acquired at the end of 2019, so when the new business is added to Hasbro's from last year, total sales fell 8% during the first quarter.

Partner brands -- which include Star Wars and Marvel toys licensed from Disney (DIS -0.90%) -- did well once again with a 6% increase. But the star and savior of Q1 was gaming, up 30%. When Monopoly and Magic: The Gathering are pulled from franchise brands and added to the gaming segment, Hasbro said its collection of board games, video games, and card games grew 40% from a year ago as households looked for ways to fill up spare time while stuck at home.

The drag was the TV and film segment (primarily EOne) and emerging brands (which includes non-TV and film revenue from EOne). The company delivered lots of fresh content during the first quarter of 2019, which didn't happen this year in 2020. Content is getting delayed to later this year due to COVID-19 restrictions, which means another tough period in quarter two is in the works. Goldner elaborated on the conference call:

While point of sale is positive in April, continuing these positive trends will likely become increasingly difficult as more countries are practicing social distancing, including limiting production of product and entertainment, distribution activities and shopping. We are leveraging our global sourcing network to get product made and delivered to consumers, but we expect the second quarter may be more challenging than the first. This is due to several factors including that late in the first quarter and to start the second quarter, more stores and countries have shut down activities; entertainment properties where we are launching product have moved to later release dates in 2020 and into 2021 -- and some have gone straight to [premium video-on-demand]; and our own live action TV and film entertainment production is limited. 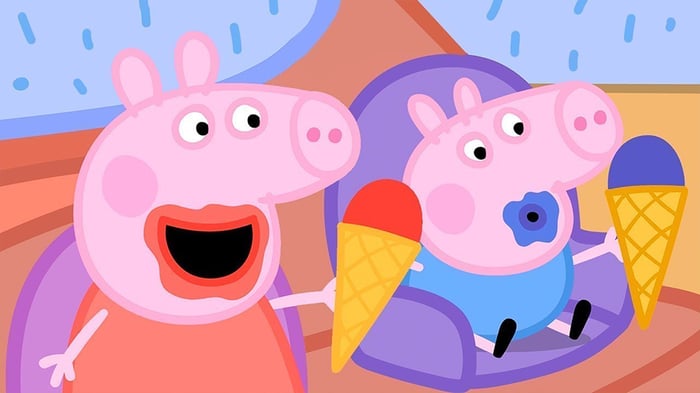 As a result, adjusted earnings before interest, tax, depreciation, and amortization (EBITDA) fell 15% in the quarter. While the bottom line could get worse before it gets better, Hasbro did say things are shaping up well for the second half of 2020. As was the plan, EOne has been put in charge of heading up Hasbro's entertainment options and has new projects in the works from the pre-existing portfolio of toys and games. Plus, Peppa Pig is now the most popular preschool show on Alphabet's (GOOGL -0.57%) (GOOG -0.54%) YouTube, and PJ Masks one of the top streamed children's shows on Netflix (NFLX -1.52%). At the moment, priority is being given to the release of the Ricky Zoom kids show and a Peppa Pig gaming app, but more details on future entertainment are forthcoming.

Debt is elevated due to the EOne takeover ($5.16 billion), and managing that burden will be a key area to watch. However, Hasbro also ended the quarter with $1.24 billion in cash and equivalents and an additional $1.5 billion in revolving credit available should the need arise. With toys, games, and related entertainment programming in high demand and shares trading for 17.9 times 2019 free cash flow, now still looks like a good time to buy for the long term.