Please ensure Javascript is enabled for purposes of website accessibility
Log In Help Join The Motley Fool
Free Article Join Over 1 Million Premium Members And Get More In-Depth Stock Guidance and Research
By Nicholas Rossolillo - Updated Dec 20, 2019 at 11:44AM

The force of consumer interest is strong with this one.

If you've been watching The Mandalorian on Walt Disney's (DIS 3.51%) streaming service Disney+, "Baby Yoda" needs no introduction. Or if you haven't, there's still a good chance you've been made aware of the viral character thanks to a meme, GIF, random conversation, or even your local news station. The character (not actually Baby Yoda, but the name has stuck) has stolen the hearts of many, and fans everywhere have been disappointed by the lack of merchandise featuring the tiny green creature thus far.

Not to worry, because Disney's licensed toy maker, Hasbro (HAS 1.27%), is coming to the rescue. Preorders at retailers are now being taken for noise-making Baby Yoda plushes and collectible figurines, though they won't ship until May 2020. That could be a long time to wait, but as the saying goes, absence makes the heart grow fonder. The delayed release -- which incidentally is also months after season one of the show concludes -- could cause some serious pent-up demand.

With green dolls are on the way, sales could be huge, and as an investor always on the lookout for a deal, that has me eyeing Hasbro and the stock's pullback follow the company's third-quarter results. 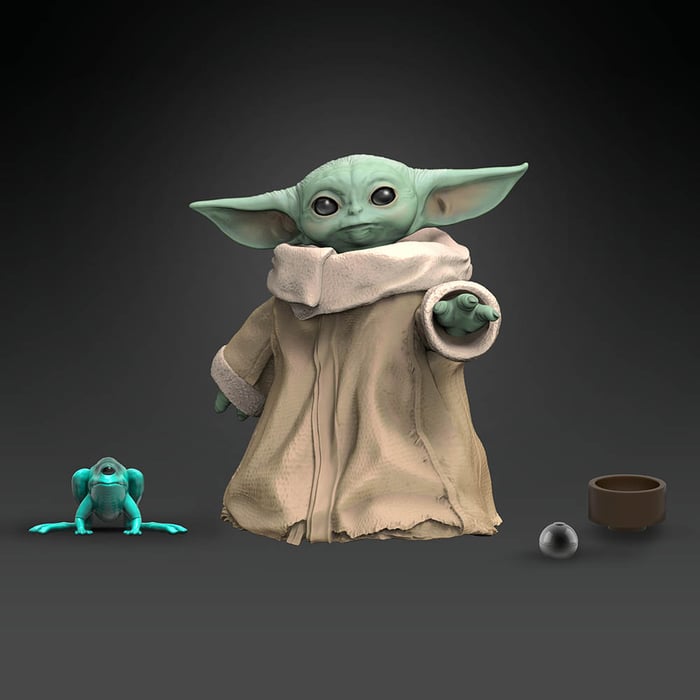 The skinny on this toy-making leader

Okay, I've been slightly disingenuous so far. All on its own, Baby Yoda (or even the much-anticipated Star Wars: The Rise of Skywalker movie, for that matter) isn't the exclusive reason one might buy Hasbro right now. However, Hasbro's success in licensing Disney's various franchises for the purpose of making toys and games is.

Here's the thing. Hasbro's "partner brands" segment -- which accounts for properties like Star Wars, Marvel, and Frozen -- surged 40% in the third quarter. We're not talking small potatoes accounting for the big bump, either. Sales were $427 million, which accounted for 27% of Hasbro's top line in the quarter, and offset declines in its own brands and digital content segments.

That trend is likely to continue thanks to the new Star Wars merchandise featuring everyone's current favorite sci-fi toddler. However, reliance on Disney to generate such a large chunk of income isn't a great scenario. It creates a risky "what-if" event. If Disney decided to pull the plug and head in a different direction, suddenly a significant portion of Hasbro's revenues would dry up. These things happen, and Hasbro shareholders know this all too well. Remember the ruckus Toys R Us caused when it went bankrupt in 2018?

Nevertheless, Hasbro has learned a lot from its partnership with Disney and other intellectual property owners. Owning popular brands outright is more important these days than ever before. We live in a connected world, and even children consume content across multiple mediums, from toys to screen time to destinations. Think about Disney and its entertainment vertical: It creates a movie or TV show, it offers the merchandise, and it sells experiences via its theme parks and games. The more places a company can capture a consumer, the more profitable that franchise becomes.

Hasbro has picked up on this and has had some success in its own right. The Transformers movie series -- based on the toys -- is the best-known example. But Hasbro needs more than just the Transformers name if it is to have the same type of steady and predictable entertainment empire Disney has developed. It's working on TV series, like the upcoming Netflix show based on the Magic: The Gathering game. Most importantly, though, is its pending $4 billion acquisition of Entertainment One, the studio behind preschool TV shows Peppa Pig and PJ Masks. And there's more than just a couple of new brands in its stable -- eOne brings Hasbro a video production studio.

Not exactly cheap but cheaper than it appears

Hasbro is one of those rare companies that provides no forward guidance on business results. Thus, it's difficult to say where results are headed next -- with or without Baby Yoda.

Toy retailing, after all, is a highly variable business. Toys and games are buzzy and viral (like Baby Yoda), and predicting what will be a hit -- and for how long -- is a big challenge. Investing in business lines like TV production and digital content that broaden Hasbro's scope of work can make great sense and smooth out some of the lumpiness inherent in retailing. For example, Hasbro's fourth quarter, which includes the holiday shopping frenzy, accounted for 30% of total revenue and 35% of adjusted profits in 2018. That can make for some sleepy periods the rest of the year.

That's the long game, though. For the here and now, it looks like an opportune time to scoop up some shares. Many investors are quick to write the stock off because of the pricey 40 times trailing price-to-earnings ratio. However, that figure accounts for a couple lean quarters in the last year for earnings as the company has adjusted to its new digital selling model post-Toys R Us. A forward price-to-earnings valuation brings the multiple down to 25 times. Simply put, the business is far more profitable than it would appear, and the expectation is that the bottom line will improve.

Of course, that likely doesn't include a short-term bump from selling cute green alien dolls. Baby Yoda sales might move the needle at Hasbro in a big way, although they don't have to. Hasbro is rewriting its destiny, and this consumer stock looks reasonably valued given its plans.