Please ensure Javascript is enabled for purposes of website accessibility
Log In Help Join The Motley Fool
Free Article Join Over 1 Million Premium Members And Get More In-Depth Stock Guidance and Research
By Eric Volkman – Updated May 4, 2020 at 3:36PM

By exercising a set of warrants, the alcoholic beverages maker now holds almost 40% of the cannabis company.

Last week, two deals were struck in the marijuana sector. By the standards of 21st-century corporate America, neither involved massive amounts of money. Yet both were significant in the industry for several notable reasons.

These were Canopy Growth's (CGC -2.23%) new cash infusion from its strategic investor, alcohol producer Constellation Brands (STZ -0.61%), and Harvest Health & Recreation's (HRVSF) sale to a classic brand in the marijuana world. Here's a glance at both. 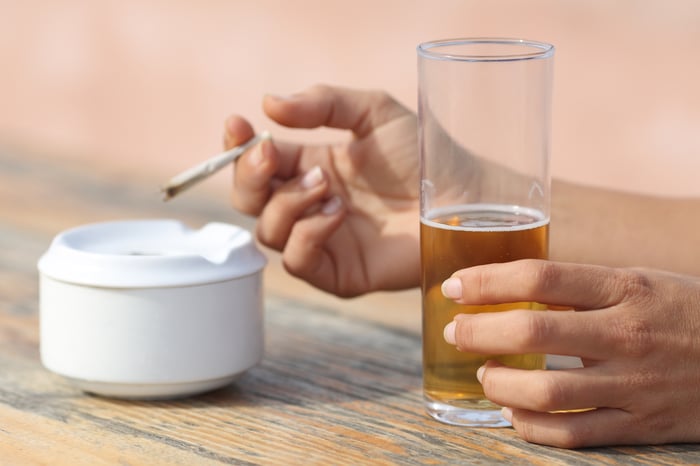 Of the two deals, the larger and more impactful was Constellation's ponying up more money to raise its stake in Canopy Growth.

This wasn't exactly an out-of-left-field surprise -- after all, Constellation has held warrants in the company for several years. It exercised roughly 245 million Canadian dollars' worth ($174 million) to boost its equity stake from 33.5% to 38.6%.

Not only wasn't this a shocking development, it also didn't radically rebalance Canopy Growth's balance sheet. At the end of the marijuana company's most recently reported quarter, it had CA$2.28 billion ($1.62 billion) in cash and equivalents; $174 million doesn't qualify as a drop in the bucket, but it's not a life-changing sum, either.

Rather, to me, the booze giant's move is an important -- and very needed -- vote of confidence in the cannabis sector's potential. Constellation made its first Canopy Growth investment in 2017 and has been involved in steering Canopy Growth; currently, three directors on the latter's seven-member board are or were Constellation executives, including the weed company's current CEO David Klein.

So Constellation knows Canopy Growth well. It wouldn't infuse its partner with hundreds of millions of dollars if it didn't believe in the company specifically, and the future of corporate marijuana generally.

To be sure, Canopy Growth still has a great many challenges to overcome. The company overextended itself in trying to become a global weed powerhouse. Many regulatory roadblocks are in its way, particularly in the U.S., and price erosion has hurt. Profitability remains elusive. Finally, there's that little business impediment called the SARS-CoV-2 coronavirus.

So, although I wouldn't slipstream behind Constellation's latest move and actually invest in Canopy Growth stock, I think the drinks manufacturer's move is a solid morale booster the cannabis industry could really use now. It should help support the current weakened share price of not only Canopy Growth, but other top-name marijuana stocks.

In the bad old days when any form of marijuana was nearly across-the-board illegal, one of the very few recognizable cannabis brand names was High Times magazine. It's still in operation (going on nearly 50 years), and last week Harvest Health & Recreation instantly made it an important name in the retail segment, too.

Harvest has agreed to divest 13 dispensaries in California, some currently operational and some planned, to High Times' parent company Hightimes Holding. They will be rebranded under the High Times name.

It's a good deal for Hightimes Holding, at least, which will fork over up to $5 million in cash, $7.5 million in a one-year, 10% promissory note, and $67.5 million in its series A preferred stock (Hightimes Holding is not yet publicly traded, by the way). In the distant pre-coronavirus past, dispensary chains changed hands for much higher amounts.

Retrenchment is in the cards for Harvest, which was once an eager acquirer -- similar to Canopy Growth and other formerly expansion-hungry marijuana peers. Harvest's cash position melted from $273 million at the end of 2018 to less than $40 million only one year later, while net losses have been considerable. The company is going to narrow its retail efforts to promising markets like its home state of Arizona, and Florida.

These days, down-shifting and asset selling is the way to go for some of the more challenged marijuana companies, and I think Harvest fits into that category. Its loss might just be Hightimes Holding's gain, though, as this is a novel, appropriate, and relatively inexpensive way to refresh a long-established marijuana brand name.