Please ensure Javascript is enabled for purposes of website accessibility
Log In Help Join The Motley Fool
Free Article Join Over 1 Million Premium Members And Get More In-Depth Stock Guidance and Research
By Zhiyuan Sun – Updated May 5, 2020 at 6:59AM

Teva's sales have been declining on all fronts while it remains mired in opioid litigation. Can a new venture into migraine treatment eliminate its troubles?

Teva Pharmaceutical Industries (TEVA 0.65%) has been plagued by material declines in its core portfolio due to patent expirations, opioid litigation, and price erosion of generic drugs. Will a new growth catalyst signal a turnaround for the company's falling sales?

In 2018, Teva's Ajovy was approved by the Food and Drug Administration as a subcutaneous injection for the treatment of migraine headaches. This was Teva's only branded product approval in the past two years, and expectations have been running high. 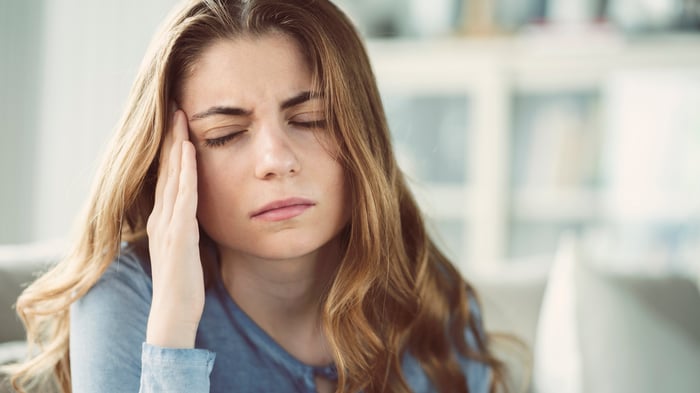 Reports and Data, a market research firm, estimated the migraine treatment market will become worth $3.51 billion by 2026. Teva's potential to capture the full opportunity, however, may be limited. There are many over-the-counter and alternative therapies for migraine available.

In addition, other preventive drugs including Emgality and Aimovig have similar, if not better, levels of reduction in the mean number of migraine headache attacks per month. Thus it should be no surprise Ajovy generated only $93 million in revenue last year. And that's just one of the company's troubles.

What problems does the company face?

Core revenues of Teva's best selling multiple sclerosis drug, Copaxone, have declined by $3.2 billion since its peak due to expiration of its U.S. patents. While its patents in the rest of the world extend beyond the late 2020s, they only protect $500 million in Copaxone's remaining sales. Meanwhile, the company also faces declines in its generics portfolio. The FDA has recently approved record numbers of generic drugs in order to push prescription drug prices down across the nation.

If that weren't enough, Teva is named in some of the more than 2,600 lawsuits from counties, cities, and states related to the opioid crisis. Last November, the company proposed a settlement that would involve donating more than $23 billion worth of naloxone, an opioid antagonist, to affected jurisdictions. It's worth noting that this settlement sum represents the list price of the drugs, while this amount of naloxone could cost just $5 billion or less to manufacture. But the proposed settlement has not yet been accepted, indicating that plaintiffs are seeking an even higher figure to end the battle. The company has been accruing cash for its expected settlement, recording an expense of $1.178 billion in legal settlements and loss contingencies in 2019.

This all brings us to the issue of Teva's debt liabilities. As of 2019, the company's long-term debt stands at nearly $25 billion net of cash. Meanwhile, the company generated just $4.685 billion in adjusted earnings before interest, taxes, depreciation, and amortization (EBITDA), representing a 12% decline from the previous year. In other words, the company's financial leverage ratio (defined as net debt divided by adjusted EBITDA) is beyond five times. If the implied settlement expense from opioid litigation is included as well ($5 billion), then the company's financial leverage ratio amounts to 6.4 times. Rating agencies usually consider four or five times net debt to EBITDA as a threshold to determine if a company has a high risk of debt. While the company is trading for merely four times forward earnings, I consider this a deceptive ratio in terms of its true value.

In my opinion, it is always better to buy a company that is growing and taking out additional loans for expansion than to buy a company that already has huge loads of debt and must deleverage. A company cannot commit sufficient capital to new growth opportunities while it's devoted to paying back debt, putting it at a significant disadvantage compared to its peers. Hence, pharmaceutical investors should look at other players in the sector for better opportunities.