Please ensure Javascript is enabled for purposes of website accessibility
Log In Help Join The Motley Fool
Free Article Join Over 1 Million Premium Members And Get More In-Depth Stock Guidance and Research
By Jennifer Saibil – May 6, 2020 at 3:42PM

The struggling company should get a much-needed boost as stores finally begin to open their doors.

The Gap, Inc. (GPS 6.32%) announced today that it plans to have 800 of its stores open by the end of the month, including those under its Gap, Old Navy, Athleta, Banana Republic, Janie and Jack, and Intermix brands.

The company will follow guidelines for reopening set by government and health officials as it slowly opens its doors. The first Gap stores will open in Texas this weekend. By the end of May, 800 stores, or about one-third of the company's U.S. footprint, will be open.

Gap will institute several safety measures for the health of employees, including supplying face masks and installing plexiglass partitions between customers and cashiers, following the lead of retailers who have stayed open during the pandemic. Restrooms won't be available, and returns will be set aside for 24 hours after coming into stores. 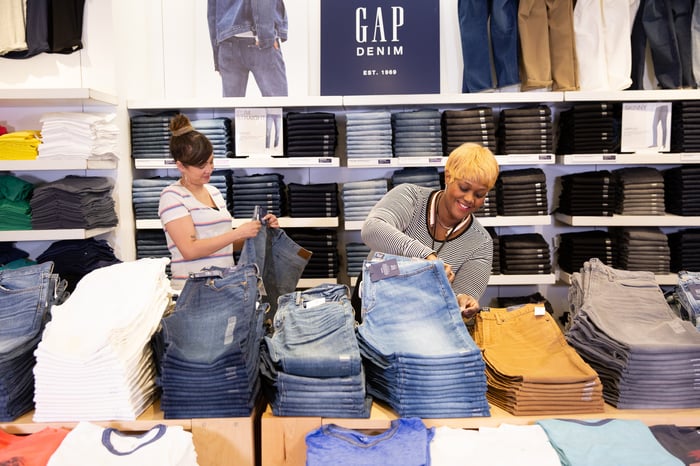 "We continue to use this crisis as an opportunity at every turn," said new CEO Sonia Syngal. "As we leverage our stores as distribution hubs, lean into the meaningful acceleration of our online business and play forward the learnings from our Asia business where all locations are now open, we believe we'll be well-positioned as this crisis subsides."

After several quarters of declining sales, Gap got a new CEO and saw sales begin to stabilize in the company's fiscal fourth quarter. However, the company has been teetering since the COVID-19 pandemic caused store closures. Syngal had announced that the company would not be able to pay its rent and has since signed licensing agreements to bring some cash into its coffers. Store openings will be a lifeline to a company gasping for breath.

Shares of Gap stock are down 57% year to date as of this morning.