Please ensure Javascript is enabled for purposes of website accessibility
Log In Help Join The Motley Fool
Free Article Join Over 1 Million Premium Members And Get More In-Depth Stock Guidance and Research
By Dan Caplinger – May 6, 2020 at 5:34PM

The stock market was mixed on Wednesday, as investors seemed to draw a line in the sand that divided individual stocks into separate camps. On one hand, old-economy companies continued to feel pressure from coronavirus-related impacts, and many questioned whether their business models would be able to survive the pandemic. Meanwhile, tech companies were some of the standouts of the day, with investors embracing the idea that innovation can beat a potentially deep recession. Those countervailing trends sent the Dow Jones Industrial Average (^DJI 0.00%) and S&P 500 (^GSPC -1.72%) lower on the day but brought gains for the Nasdaq Composite (^IXIC 0.00%).

Many investors are having trouble understanding why the stock market has rallied so much from the March lows, especially because huge economic concerns still persist. One reason is that even with doubts across the overall stock market, some companies are putting together amazing performances. Today, Beyond Meat (BYND 2.88%) and Virgin Galactic Holdings (SPCE -2.01%) made their cases for being some of tomorrow's big winners, and shareholders generally liked what they saw. 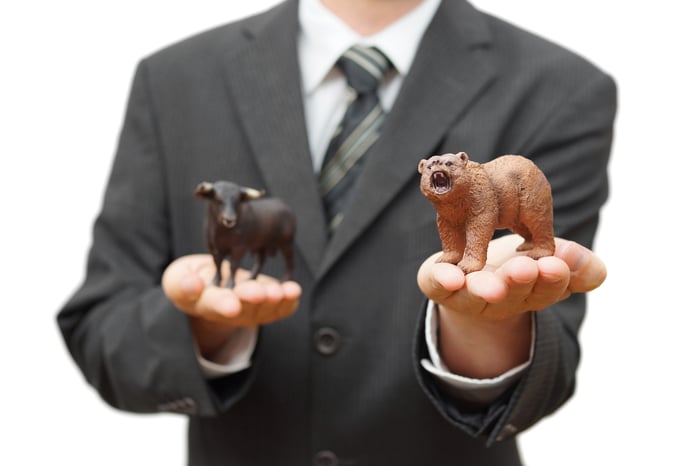 Beyond Meat moves beyond red ink

Shares of Beyond Meat soared 26% Wednesday after the plant-based meat-alternative producer reported its first-quarter financial results. Even though the company withdrew its guidance for the full 2020 year, shareholders liked what they saw from the first quarter.

Beyond Meat saw revenue soar more than 140% during the period compared to year-earlier levels, as the company got strength both from its retail-sold products and from its collaborations with restaurants and other food service providers. Even better, Beyond Meat managed to eke out a modest profit of $1.8 million, reversing year-ago losses and marking a key turning point for the company.

One thing supporting Beyond Meat's future is that the coronavirus pandemic has brought about disruptions to supply chains for regular meat products. The resulting shortages are pushing meat prices higher, and that makes Beyond Meat's alternatives look more attractive by comparison.

Beyond Meat hopes to win over customers with promotions geared toward encouraging people to try out its products. Trying to win on price might not be the best long-term strategy, but for cash-strapped consumers, a bargain could be just the ticket to opening up new opportunities for the meat-alternative specialist.

Elsewhere, Virgin Galactic saw its stock launch higher by 11%. For a space tourism company that still hasn't sent its first paying customer into the stars, that's an impressive showing.

Virgin Galactic's first-quarter results were largely what one would expect from a business that's not yet fully operational. Revenue came in at just $238,000, and that resulted in a loss of $0.30 per share. However, Virgin Galactic did get 400 more customer deposits of $1,000 each for future flights under a program dubbed "One Small Step." That could bring in about $100 million if those customers follow through with full-ticket purchases. That money doesn't get reflected in revenue because the company hasn't yet earned it, but it does show that tourists are still more interested than ever in getting into space.

Also interesting for Virgin Galactic was a deal with NASA to look at hypersonic vehicles for point-to-point civil transportation. Many investors have seen the prospects of fast intercontinental travel as a big selling point for the Richard Branson-inspired company, and working with NASA gives Virgin Galactic another key first-mover edge.

It'll be a long time before Virgin Galactic has a chance to make good on its full potential, and the company still doesn't know when its first flight will be. When it does, though, investors will be even more excited than ever -- and the stock could head still further skyward at that point.