Please ensure Javascript is enabled for purposes of website accessibility
Log In Help Join The Motley Fool
Free Article Join Over 1 Million Premium Members And Get More In-Depth Stock Guidance and Research
By John Bromels - May 6, 2020 at 9:51AM

The oil and gas driller's stock outperformed the market as oil prices recovered.

Shares of the ConocoPhillips (COP 0.25%), the largest U.S. oil and gas exploration and production company (E&P), rose 36.7% in April, according to data provided by S&P Global Market Intelligence. The move partially reversed the losses the company experienced in March, when its shares fell by 36.4%.

However, even though April's percentage gain was nearly identical to March's percentage loss, the April percentage comes from a lower baseline, so Conoco's price declined by 13.1% over the combined two-month period. Since the beginning of the year, the company's shares have lost 37.1% of their value. 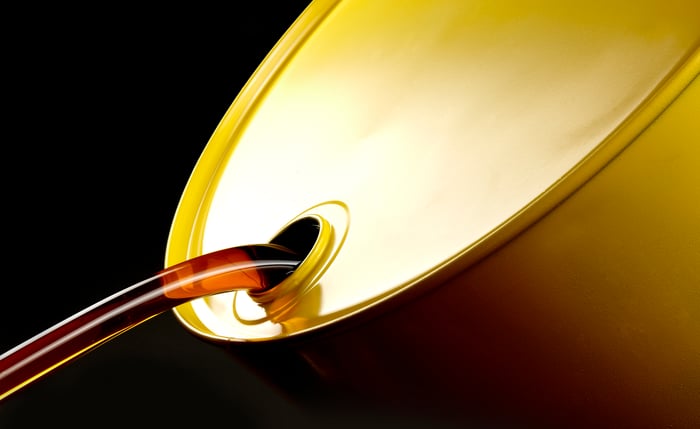 ConocoPhillips' move was part of a larger recovery in the broader oil industry, which was hammered in March, first as a price war broke out between Saudi Arabia and Russia, and then as coronavirus-related travel restrictions caused demand for automobile and jet fuel to dry up. Crude oil prices lost about half their value in March.

The severity of March's price downturn combined with questions about the severity and duration of coronavirus-related shutdowns caused ConocoPhillips to take drastic action. It cut its 2020 capital spending budget by 10% and reduced its share repurchases by two-thirds. Those actions were mild compared to the deep cuts made by some of its E&P peers.

On April 12, Saudi Arabia and Russia called at least a temporary halt to their price war, and together with other OPEC and non-OPEC nations, including the U.S., agreed to a 9.7 million barrel/day reduction in global crude output. News of the deal, combined with moves by several U.S. governors to begin easing restrictions, cheered energy investors, who bid up ConocoPhillips' share price.

The oil market is still a volatile and uncertain place for investors. While ConocoPhillips is one of the largest E&Ps, with a stronger balance sheet than most, it's still beholden to oil prices, which are currently hovering at levels we haven't seen since the 1990s. Meanwhile, there's a global shortage in oil storage, and demand is still weak.

Investors will probably want to stay away from oil producers, including ConocoPhillips, until the situation improves in the oil patch.