Please ensure Javascript is enabled for purposes of website accessibility
Log In Help Join The Motley Fool
Free Article Join Over 1 Million Premium Members And Get More In-Depth Stock Guidance and Research
By Keith Noonan – May 6, 2020 at 9:11AM

Shares of DouYu (DOYU -6.84%) climbed 18.4% in April, according to data from S&P Global Market Intelligence. The gaming-video streaming stock bounced back after falling 17.5% in March's trading. 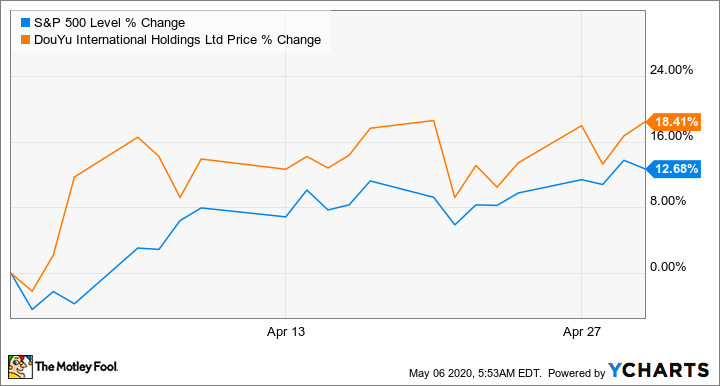 DouYu stock climbed in conjunction with momentum for the broader market last month. The company's share price also appears to have benefited from Tencent Holdings opting to purchase a controlling stake in Huya -- DouYu's biggest rival in the gaming-video-streaming space.

DouYu and Huya operate streaming platforms that allow users to broadcast live footage of themselves playing video games. The content category has seen rapid growth in recent years and looks primed for long-term expansion in the Chinese market.

Tencent Holdings exercised a pre-existing option to purchase a controlling stake in Huya early in April. Tencent also owns a substantial stake in DouYu, and news that the Chinese media conglomerate was purchasing a majority stake in Huya signaled its confidence in the gaming-video content space and raised the possibility that the tech giant would also move to acquire a larger stake in DouYu.

When DouYu published fourth-quarter results in March, the company laid out guidance for revenue between 2,100 million yuan and 2.16 billion yuan -- representing 43% year-over-year growth at the midpoint of the target. The company noted it had seen user engagement increase significantly since the start of the novel coronavirus outbreak, so the business appears to be capable of reaching that impressive growth target.

DouYu stock has dipped roughly 5.5% in May's trading, while the S&P 500 index has declined 2.4% across the same stretch.