Please ensure Javascript is enabled for purposes of website accessibility
Log In Help Join The Motley Fool
Free Article Join Over 1 Million Premium Members And Get More In-Depth Stock Guidance and Research
By Donna Fuscaldo – May 7, 2020 at 2:59PM

Uber led a $170 million investment in electric scooter startup Lime. Through the deal, the two will be further integrated.

Uber (UBER 2.53%) just laid off 3,700 full-time employees, but that isn't stopping the ridesharing company from investing in other start-ups during the pandemic.

Lime, the electric scooter and electric bike company hailing, announced Thursday Uber that is leading a $170 million investment in the company. Other investors participating in the fundraising round include Alphabet, Bain Capital Ventures, and GV among others. 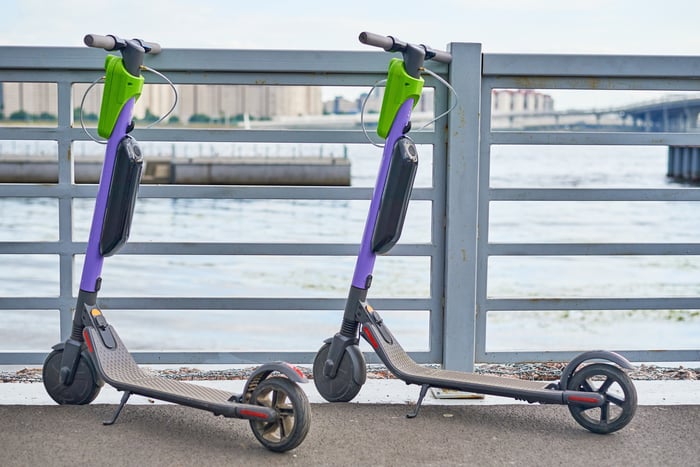 As part of the investment, Lime said it will expand mobile app integration with Uber and acquire the operations of JUMP, Uber's electric bike, and scooter unit. Wayne Ting, Lime's global head of operations and strategy was named its new CEO while Brad Bao will continue as chairman of the board.

"Today's announcement means that riders around the world will have even more integrated micromobility options at their fingertips, making car-free travel easier than ever before," wrote Lime in a press release. "In almost all markets where Lime and Uber operate, users will be able to turn to both the Lime and Uber app to unlock world-class products and services."

The move on the part of Uber to lead the investment in Lime comes as a new reality is setting in: with social distancing rules in place, hailing a ride isn't a top priority. Even as the restrictions are eased, people may think twice about jumping in a car for a ride. That's particularly true in hard-hit cities like New York. The tech stock's CEO Dara Khosrowshahi said as much in the announcement, noting that "now more than ever" micromobility is a "critical part of the urban landscape."

This week Uber announced it was laying off 3,700 employees amid a steep decline in trip volumes. Uber's CEO also agreed to give up his base salary for the remainder of the year.