Please ensure Javascript is enabled for purposes of website accessibility
Log In Help Join The Motley Fool
Free Article Join Over 1 Million Premium Members And Get More In-Depth Stock Guidance and Research
By Daniel Foelber – May 7, 2020 at 7:17AM

What Buffett’s sale means for Delta.

Should you sell too, or are Delta shares a buy at this reduced price? 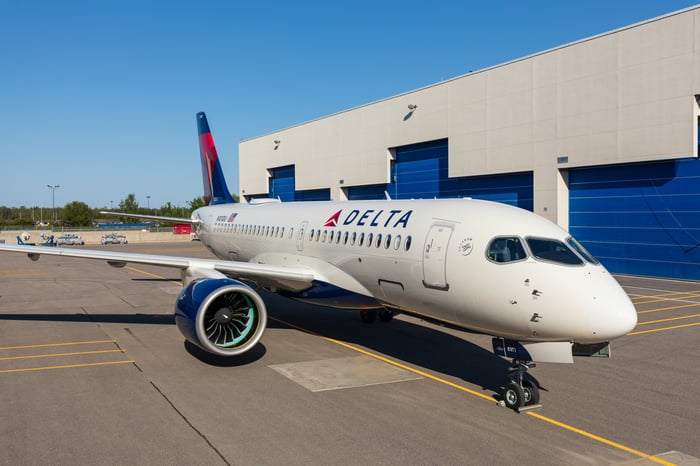 Flashed across business and finance news outlets on Monday was the headline that Warren Buffett sold all his airline stocks. Although some outlets are guiltier than others with their packaging of this news, the headline could easily be misinterpreted as saying that Buffett sold all his airline stocks in one fell swoop or in a day or two, when in reality, the sale occurred gradually over the month of April. In fact, Buffett had already announced his sale of large portions of Southwest and Delta in early April. The Monday headline is certainly not good news, but it's also not as dramatic as it seems.

Buffett's take on the airlines

The Berkshire Hathaway Annual Shareholders Meeting typically attracts tens of thousands of visitors from around the world to Omaha, Nebraska to share in the wisdom of Warren Buffett. Held virtually this year, it was one of the most important events of the weekend as investors and admirers waited with bated breath to listen to the Oracle of Omaha's first public remarks since the onset of the COVID-19 (coronavirus) pandemic.

"I hope I'm wrong," said Buffett when discussing Berkshire's airline purge. His melancholy tone reflected his sympathy for the industry. "The future is much less clear to me how the business will turn out for absolutely no fault of the airlines themselves."

Warren Buffett was a longtime critic of the cyclical nature and capital intensity of airlines. That changed in 2016 when Berkshire purchased shares of four major airlines, one of which was Delta. Buffett then added more than five million Delta shares in 2019.

During the meeting, Buffett pointed out uncertainties that many travelers and investors are already thinking, namely that public perception has changed and people will fly less in the coming years. He also noted the oversupply and over-ordering of aircraft by major airlines, which seemed logical at the time but now is simply another weight on the industry's wavering shoulders.

A bit shocking to me and other Fools was Buffett's full-on eradication of Berkshire's entire airline position, including stronger airlines like Delta and Southwest.

Delta was arguably the best airline going into 2020. Both on a percentage basis and in terms of absolute values, Delta grew its net income and free cash flow (FCF) more than Southwest, United, or American Airlines over the past three years. In short, Delta has been the elite cash cow of the industry. 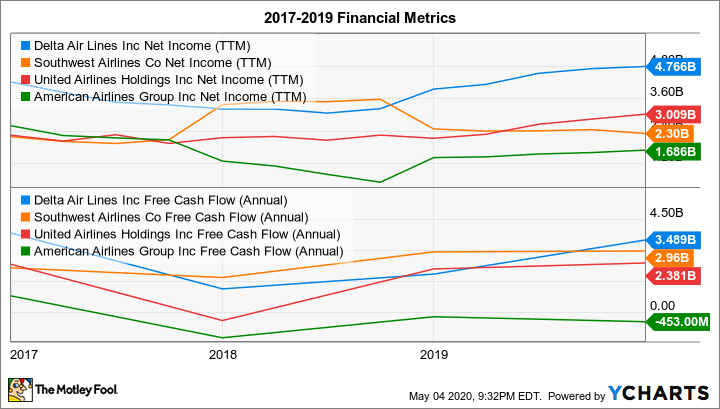 But as Buffett pointed out, times have changed for the airlines. Now, it's all about financial strength and an airline's ability to survive this crisis, which means determining if an airline has too much debt or is overly leveraged. 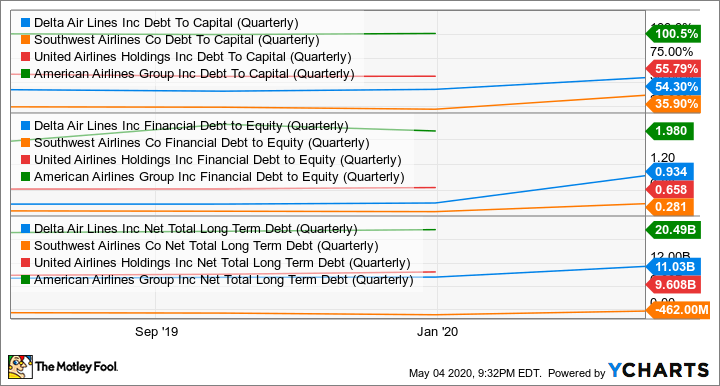 Although it's not as solid as Southwest, Delta is getting a boost from the government bailout. "The agreement with [the] Treasury includes $5.4 billion from the payroll support program. The payment includes an unsecured 10-year low-interest loan of $1.6 billion, and Delta will provide the government with warrants to acquire about 1 percent of Delta stock at $24.39 per share over five years," the company said.

Delta is an interesting airline stock because it doesn't have the best balance sheet, but it has arguably the most upside if airline traffic improves over the coming quarters.

For now, Delta can do little more than wait. According to Delta's first-quarter 2020 earnings release, the company expects June revenues to be down "90% compared to a year ago." The company is "parking more than 650 aircraft," and is "instituting a companywide hiring freeze and offering voluntary leave options with 37,000 employees taking short-term unpaid leave."

Like all airlines, Delta will likely continue to struggle as preferences change toward flying. An investment in Delta is essentially a bet that the economy will slowly heal and people will once again be taking to the skies for business and personal trips. One of my biggest fears is that the widespread adoption of virtual meetings could lead to a paradigm shift that makes it difficult to justify face-to-face business meetings from a cost perspective. The fewer in-person meetings, site visits, plant visits, industry conferences, etc., there are, the less revenue there will be for the airline industry.

This paradigm shift aside, Delta is one of the best U.S. airlines and has a proven track record of strong earnings and cash flow. The suspension of the company's dividend and government aid are necessary measures to give the company as much cash as possible. Delta is flying straight into a series of headwinds that will test the company's resilience to its core. With the stock down over 60% in 2020, I think a long-term investment in Delta is wise if the assumption is made that a rebound could take years. That being said, investors can take solace in knowing that Delta is one of the best-positioned airlines in a war of attrition where only the fittest airlines survive.