Please ensure Javascript is enabled for purposes of website accessibility
Log In Help Join The Motley Fool
Free Article Join Over 1 Million Premium Members And Get More In-Depth Stock Guidance and Research
By Bram Berkowitz - Updated May 7, 2020 at 2:50PM

Profits dropped 87%, but the company is projecting 15% revenue growth in the second quarter.

Net income at PayPal Holdings (PYPL 2.01%) dropped 87% in the first quarter, but executives also said that the company is headed in a good direction in the second quarter.

While the payment technology company saw net revenue grow 12% over the same period the year before, it was also forced to increase the cash it sets aside to cover losses by $237 million as a result of the coronavirus pandemic. 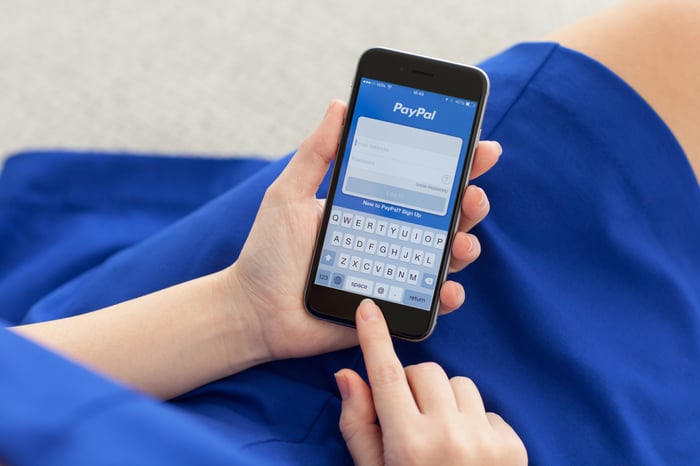 PayPal's effective tax rate for the quarter also climbed to more than 68%, primarily because it closed on its $4 billion acquisition of Honey Science, which offers products and services that help users save when they spend online.

But despite the tough quarter on paper, PayPal added a record 20.2 million net new active accounts, roughly 10 million of which came from Honey. The company also saw 18% annual growth in total payment volume.

"As our platform sees record increases in both new customer accounts and transactions, it is clear that PayPal's products are more important and relevant than ever before," PayPal President and CEO Dan Schulman said in a statement. "The strength of our customer value proposition combined with the acceleration of digital payments adoption significantly accelerated in April, with increased demand and engagement."

The company disclosed in its earnings call that it's off to a good start thus far in the second quarter, with total payment volume up 22% in April on a year-over-year basis. It also said revenue rose about 20% on a currency-neutral basis in April.

PayPal is projecting 15% revenue growth on a currency-neutral basis and 15% growth in adjusted earnings per share in the second quarter. It thinks it can grow accounts by 15 million to 20 million.

"I would argue that April was probably the strongest month for PayPal since we became a public company," Schulman told MarketWatch.