Please ensure Javascript is enabled for purposes of website accessibility
Log In Help Join The Motley Fool
Free Article Join Over 1 Million Premium Members And Get More In-Depth Stock Guidance and Research
By Prosper Junior Bakiny - May 8, 2020 at 6:23AM

Vertex Pharmaceuticals’ stock has been providing market-beating returns of late. Here’s why it can continue outperforming.

Further, Vertex's net income based on generally accepted accounting principles (GAAP) was $603 million, a 124% increase compared to the prior-year quarter. Vertex's stock got a nice boost after its most recent quarterly update, and year to date, the company's shares are up by 22.8%. And even though the company is currently trading at about 33 times future earnings, there are good reasons to consider buying its shares. Here are three of those reasons. 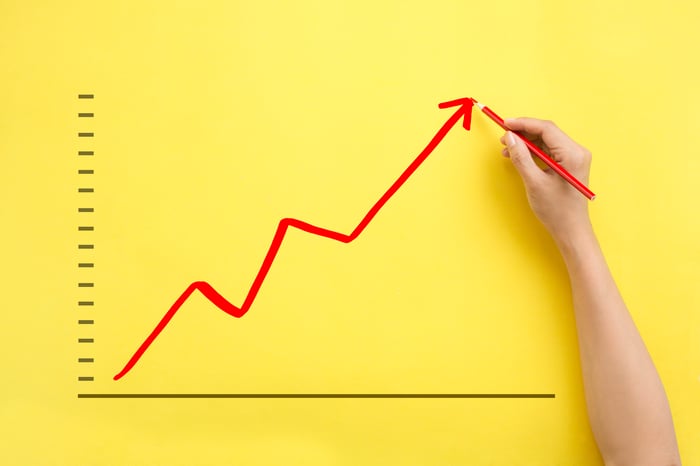 Vertex's first treatment for the underlying causes of CF was approved back in 2012. However, its most crucial approval yet came in October 2019 when the U.S. Food and Drug Administration (FDA) gave the green light to Trikafta. Why was this approval so important?

Since there are many mutations that cause CF, Vertex's drugs can only treat a limited number of CF patients. But Trikafta was developed to treat patients with the most common CF mutation. Thanks to this drug, Vertex can now treat about 90% of patients with CF, which makes up about 68,000 of the 75,000 CF patients in the U.S., Europe, and Australia.

Trikafta is already making significant headway. During Vertex's first quarter, revenue from Trikafta was $895 million. Note that Vertex's other three products recorded a total revenue of $620 million during the quarter. In other words, Trikafta was responsible for Vertex's stellar revenue growth during the first quarter, and given that this product has been approved for less than a year, it likely still has a lot of room to grow.

Impressive revenue and earnings growth wasn't the only good news in Vertex's latest quarterly update. The company also announced that it was adjusting its guidance for the current fiscal year. And while many companies are slashing or outright withdrawing their initial revenue and earnings prediction for 2020 due to the ongoing pandemic, Vertex revised its guidance upward for the year.

The company previously expected its revenue for the fiscal year to be between $5.1 billion and $5.3 billion. Now, Vertex expects its revenue for 2020 to be between $5.3 billion and $5.6 billion. The midpoint of this guidance would represent a year-over-year increase of about 31%. In short, Vertex will continue to thrive even in the current uncertain economic landscape.

Vertex is looking beyond the CF market to find other growth opportunities. Two of these opportunities are worth mentioning. First, the biotech acquired privately held Semma Therapeutics last year in an all-cash transaction valued at $950 million.

Semma is going after a challenging target: The company is looking to cure type 1 diabetes. And now that Semma is under Vertex's umbrella, Vertex could profit immensely from this project; that is, if it ever comes to fruition. Sure, it sounds like a long shot at this point, but Vertex isn't content with its dominance in the CF market.

Second, Vertex could benefit from its collaboration with CRISPR Therapeutics (CRSP 1.55%). The two companies are developing several exciting candidates together, the most notable being CTX001, which showed strong potential in the treatment of sickle cell disease and transfusion-dependent beta thalassemia, both of which are rare blood disorders. CTX001 is still the early testing phases, but it is yet another interesting potential product which could be a significant growth driver for Vertex -- if it ever earns FDA approval.

Vertex's latest approval is already making significant headway. Also, the company's revenue and earnings aren't taking a hit as a result of the ongoing pandemic. Lastly, the biotech company has several growth opportunities at its disposal. For all those reasons, Vertex still looks like a biotech stock worth buying today.