Please ensure Javascript is enabled for purposes of website accessibility
Log In Help Join The Motley Fool
Free Article Join Over 1 Million Premium Members And Get More In-Depth Stock Guidance and Research
By Rhian Hunt – May 8, 2020 at 5:47PM

The company has a proactive cleaning schedule and other safety measures in place.

Lifestyle-apparel company American Eagle Outfitters (AEO -3.58%) reopened slightly less than four dozen of its various brand stores this week, less than half a percent of its approximately 1,000 retail outlets. The openings still represent the first opportunity for customers to shop directly in American Eagle's aisles since the company shuttered its stores on March 18.

The clothing company began offering curbside pickup again last Monday to supplement the increased digital sales it was already generating during the shutdown. The first reopenings came just a week later and continue to expand. 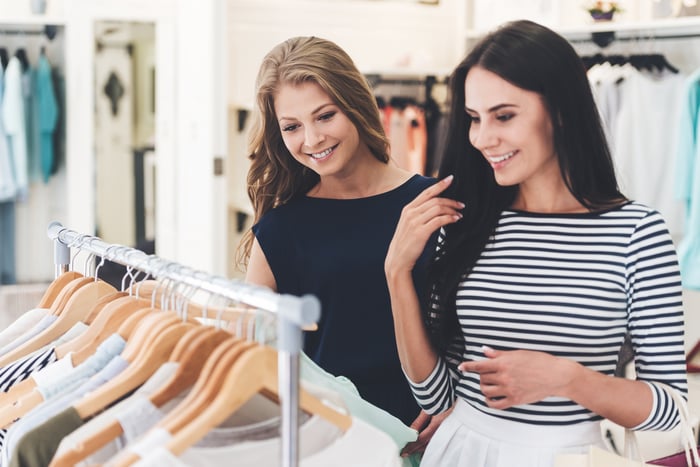 Customers venturing back into American Eagle brick-and-mortar locations will find a battery of health and safety measures in place to help reassure them of a reduced coronavirus risk. The protocols American Eagle settled on include frequent store cleanings, temperature scans and masks for employees, hand sanitizers, and touch-free payments.

American Eagle opted not to close changing rooms in the way Gap, Inc. (GPS -4.40%) has chosen to in the stores it's reopening this month. Instead, each fitting room will be sanitized after a customer finishes trying on clothes and the garments themselves will be quarantined in a box for 24 hours if the customer decides not to purchase them.

The first 43 stores to open will soon be joined by many more, leading to roughly 600 in total that will be back in business by the end of May, according to executive statements. Greeters at the door will limit customer numbers in the store at one time to approximately one person per 200 square feet. According to CEO Jay Schottenstein, all stock will be new -- not inventory left over from before the shutdown.