Please ensure Javascript is enabled for purposes of website accessibility
Log In Help Join The Motley Fool
Free Article Join Over 1 Million Premium Members And Get More In-Depth Stock Guidance and Research
By Bram Berkowitz - May 9, 2020 at 9:32AM

Credit card debt often experiences higher charge-off levels than most loan products, and those can spike during a downturn.

All banks are bracing for heavy loan losses as a result of the economic shut down caused by the coronavirus pandemic. But one type of loan category that always comes with a larger loss rate -- even under normal economic conditions -- is credit card debt. For instance, national credit card charge-offs (debt unlikely to be recovered) in 2019 were 3.7% . It may sound like a small number, but it's huge when you consider that most banks were reporting charge-off rates well below 1% up until recently.

Even the nation's largest bank, JPMorgan Chase (JPM -0.48%), only had a ratio of net charge-offs to total loans of 0.60% at the end of 2019, and the banking giant has its own credit card division . Because credit card write-offs and delinquency rates often get worse during a recession or downturn, let's see how some of the biggest credit card companies in terms of how important credit card debt is to their overall health are holding up in these precarious times. Credit card loans at Capital One (COF -0.98%), American Express (AXP -1.46%) and Discover (DFS -1.34%) make up 30%, 39%, and 65% of each company's total assets, respectively, making cards a key component of their success. 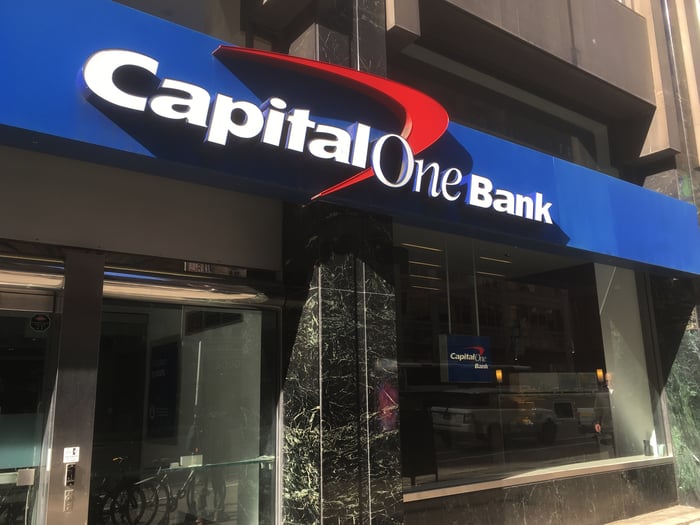 There are a few interesting takeaways from the provisions. American Express likely performed better because less of its overall portfolio is composed of credit cards. More than half of its total revenue comes from discount revenue -- fees charged to merchants when card members use their American Express cards to purchase goods and services. Now, discount revenue is down significantly in the quarter, but you don't have to reserve against it.

Another interesting takeaway is that the percentage increase in the credit provision of these companies was not as high as some of the larger, more traditional banks like Bank of America (BAC -0.28%), which increased its provision by more than 400% from the linked quarter.

That could be because the credit card companies already set aside more total reserves. But you would think that companies such as Capital One and Discover, with heavy credit card loan portfolios, might see higher percentage increases in their credit provision, given the nature of their business.

Another big issue hurting these companies is a decrease in overall spending. A credit card is a type of revolving debt, so unlike an installment loan, borrowers don't receive a lump sum of money before spending it. Rather, they spend, or borrow, the money first and pay it back later. Less spending effectively means less borrowing, along with fewer interest payments and transaction fees.

Recently, the U.S. Commerce Department said consumer spending dropped 7.5% in March, and a similar trend is playing out in April. American Express revealed in its investor presentation that proprietary billings -- spending on American Express cards issued by the company -- is down about 45% on an annualized basis in April, although it is showing signs of stabilizing. The company has been hit particularly hard in travel and entertainment (T&E). 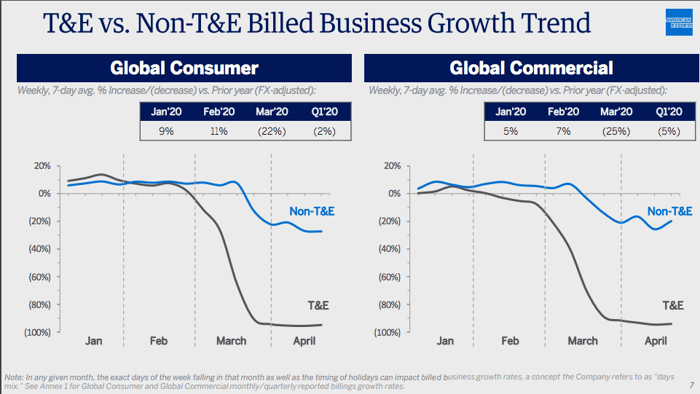 Discover is seeing the same thing play out. Fifty-one percent of the company's sales in 2019 were made in the travel (8%), restaurants (8%), and retail (35%) industries. Between April 1 and April 19, volume at the company on an annualized basis had declined by 99% in travel, 60% in restaurants and 11% in retail. 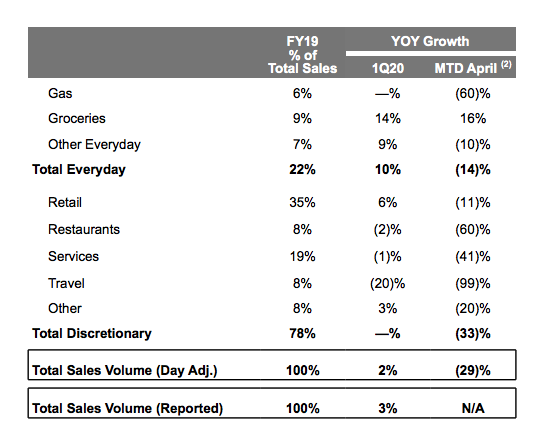 With heavy losses expected in the second quarter and the rest of the year still uncertain, all three companies made sure to emphasize that they entered the pandemic with strong capital positions. Capital One said it had $106 billion in total liquidity reserves from cash, securities, and Federal Home Loan Bank (FHLB) capacity at the end of the first quarter . American Express said its balance of cash and investments had grown to $41 billion at the end of Q1 , while Discover said it had $19 billion in liquid assets and plenty of borrowing capacity as well .

All three companies are also planning to cut expenses to bolster liquidity even more. American Express CEO Stephen Squeri said the company will look to reduce discretionary expenses across the enterprise by nearly $3 billion, and then redirect some of those funds into new product benefits and longer-term investments. Discover's CEO Roger Hochschild said the company is planning to implement approximately $400 million of cost reductions over the remaining three quarters of 2020. And Capital One CEO Richard Fairbank said the company is pulling back on some marketing initiatives, tightening hiring, and managing operating expenses carefully.

Capital One, American Express, and Discover also said they felt much better about overall credit quality than they did heading into the Great Recession in 2008. Fairbank said in general the U.S. consumer is in much better shape because consumer debt levels are lower on a per capita basis, while lower interest rates make debt repayments easier, and people save more now than they used to. Hochschild said while 26% of Discover's credit card portfolio at the end of 2007 had a FICO score of below 660, that number was only 19% at the end of 2019. Meanwhile, American Express CFO Jeffrey Campbell said 88% of U.S. consumer and small business customers who enrolled in the company's customer pandemic relief program are prime and super-prime card members .