Please ensure Javascript is enabled for purposes of website accessibility
Log In Help Join The Motley Fool
Free Article Join Over 1 Million Premium Members And Get More In-Depth Stock Guidance and Research
By Rick Munarriz - May 9, 2020 at 2:00PM

All three cruise lines have their pros and cons, but Royal Caribbean is better positioned to succeed than Carnival or Norwegian Cruise Line.

Cruise line stocks made some big waves this week. Industry leader Carnival (CCL 1.71%) (CUK 1.56%) announced that it will begin sailing again in August. Norwegian Cruise Line Holdings (NCLH 2.91%) was initially rattled after a filing warning about its ability to continue as a "going concern," only to recover slightly after lining up more than $2 billion in new liquidity.

Royal Caribbean International (RCL 1.56%) didn't make the same kind of noise as its peers. It didn't follow Carnival into committing to a handful of named ships sailing out of three specific ports this summer. It didn't put out the same cautionary boilerplate language as Norwegian Cruise Line, largely because it lined up necessary financing earlier in this crisis. However, for one of the industry's hardest hit industries of 2020, Royal Caribbean is starting to stand out at the class act in this niche. If you have the stomach to buy into the cruise industry in these uncertain times, you can do worse than buying into Royal Caribbean. 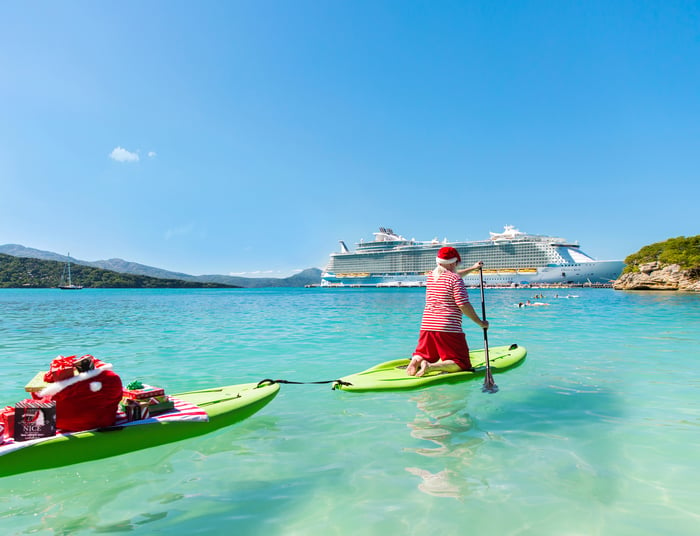 Before setting up the bullish argument for Royal Caribbean, it needs to be said that buying into the cruise line industry right now is risky business. We may be more than three months away from when any of the publicly traded players are greeting passengers again. We haven't hit rock bottom as lawsuits will continue pile in, negative headlines will keep mounting, and congressional investigations have yet to play out.

Norwegian Cruise Line may have dodged a bullet by lining up enough liquidity to get itself through the springtime of next year, but if this were a horror movie you know it would be the first one to get slashed. Spoiler alert: this is a horror movie. Carnival is the largest player in this waves-smacked realm, but its namesake brand is a popular choice for first-time cruisers. Cruise fans may be quick to hop back on their favorite ships from the fleets of Royal Caribbean, NCL, and some of Carnival's non-Carnival fleets when the time is right, but Carnival's flagship brand is going to suffer with the masses now turned off to the prospect of boarding a cruise ship.

Royal Caribbean stands out in the crowd. Net margins have clocked in at 17.4% or better for Royal Caribbean in each of the past three years. Net income margin has been in the low- to mid-teens for its two rivals in the same timeframe. Gross margin has also been higher than the competition. Margins may be the last thing you're thinking about right now when the cruise fleets are in the process of emptying out their crews this week, but when we are back in business it means that Royal Caribbean will likely be the first player to return to profitability.

No player will be immune from the hit that the industry's reputation is in the process of absorbing, and Royal Caribbean hasn't always been a saint here. However, if you had to pick the one cruise line operator that would outlast the competition in the slow recovery, it would have to be Royal Caribbean.

Royal Caribbean's superiority isn't a secret. There have been times in recent weeks when Carnival and Royal Caribbean have had comparable enterprise values despite Carnival generating roughly double the revenue of Royal Caribbean. It trades at multiple premiums to its peers, and deservedly so.

In these iffy times -- between the drawn-out COVID-19 fallout and the global recession -- if you're going to take a chance, you may as well invest in the best. Royal Caribbean is the best run cruise line.