Please ensure Javascript is enabled for purposes of website accessibility
Log In Help Join The Motley Fool
Free Article Join Over 1 Million Premium Members And Get More In-Depth Stock Guidance and Research
By Prosper Junior Bakiny – May 10, 2020 at 7:55AM

The pharma giant is thriving amid the COVID-19 outbreak, but is now a good time to buy?

The COVID-19 pandemic is still far from over, and many investors are increasingly looking for stability in a highly volatile stock market. And while no industry has been entirely immune to the adverse effects of the outbreak, some pharmaceutical companies have managed to handle the ongoing crisis better than most. AbbVie (ABBV -5.96%) is one of those companies with financial results that haven't been hit hard by the public health crisis. The drugmaker released its first-quarter financial results May 1, and AbbVie's revenue of $8.6 billion and earnings per share of $2.02 both came in ahead of analyst estimates.

Still, detractors may point to the fact that AbbVie's most important cash cow, Humira, continues to lose steam abroad: During the first quarter, Humira's international revenue was $1.047 billion, representing a 14.9% year-over-year decrease. Humira has been AbbVie's crown jewel since the pharma giant split from its former parent company, Abbott Laboratories (ABT -1.56%), to become a stand-alone publicly traded company in 2013.

Since then, AbbVie has outperformed the broader market -- largely thanks to Humira's growing sales -- with its shares gaining 136.6%, compared to 106.5% for the S&P 500. With this backdrop in mind, it isn't surprising that investors are skeptical of AbbVie now that Humira's sales are taking a serious hit. But even with Humira facing competition from biosimilars in Europe, there are plenty of reasons to love AbbVie's stock. Here are just three. 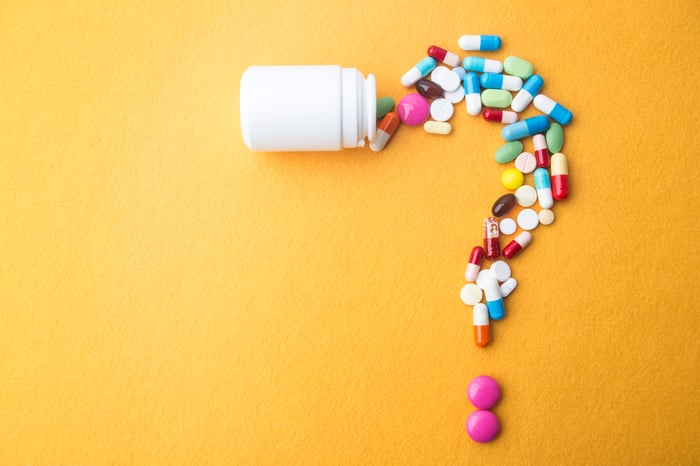 1. Passing of the torch

Even though Humira's revenue continues to decline in international markets, the biologic treatment for plaque psoriasis, ulcerative colitis, and Crohn's disease among other indications, is still making headway in the U.S. During the first quarter, Humira's U.S. net revenue was $3.7 billion, a 13.7% year-over-year increase. AbbVie also has several drugs with fast-growing sales, and these drugs are recouping some of Humira's losses in international markets. For instance, there's Imbruvica, a cancer drug that AbbVie shares the rights to with Johnson & Johnson (JNJ -0.71%). During the first quarter, Imbruvica's revenue was $1.2 billion, representing a 37.9% increase compared to the prior-year quarter.

This cancer drug continues to rack up approvals too: Imbruvica recently earned its eleventh indication from the U.S. Food and Drug Administration (FDA). Elsewhere, revenue from Venclexta -- another cancer drug -- was $317 million, more than doubling compared to the year-ago period. Lastly, Skyrizi -- a treatment for moderate to severe plaque psoriasis that was approved last year -- recorded $300 million in revenue, compared to the $216 million it recorded during the fourth quarter. These products will continue to help AbbVie's revenue stay afloat.

Last year, AbbVie famously made a move to acquire Allergan (AGN) in a cash and stock transaction valued at about $63 billion. And while this acquisition ran into some roadblocks -- including from a coalition of unions and consumer groups that raised antitrust concerns -- the deal is set to close sometime this month. Once the acquisition is complete, AbbVie will have even more products in its lineup to further reduce its top-line exposure to Humira.

It is worth noting that although AbbVie will pay approximately $41 billion in cash to fund this acquisition, the company significantly increased the amount of debt on its balance sheet. In November, AbbVie issued $30 billion in unsecured notes, the proceeds of which the company will use to fund the blockbuster acquisition and related expenses.

During the company's first-quarter earnings conference call, CFO Robert Michael said, "The robust cash flow generation of the combined company will be used to rapidly pay down debt, support a strong and growing dividend and pursue additional innovative mid-to-late stage pipeline assets. We have committed to paying down $15 billion to $18 billion of combined company debt by the end of 2021, of which nearly $7 billion will be repaid by the end of May 2020."

AbbVie is particularly counting on Allergan's crown jewel, Botox, to decrease its reliance on Humira and generate strong cash flows. During Allergan's latest reported quarter -- Q4 2019 -- Botox's total net revenue was about $1 billion, a 7.9% year over year increase. AbbVie is also counting on the fact there are currently no biosimilars for Botox, and in the words of AbbVie's CEO Richard Gonzalez, it would be "extremely difficult" to create any biosimilar for this product.

Because of these factors, AbbVie's amount of debt shouldn't be a deal-breaker for investors.

Lastly, AbbVie remains a stock worth serious consideration for income-oriented investors. The company currently offers a dividend yield of 5.5%, which compares favorably to that of the S&P 500 at about 2.3%. AbbVie's quarterly dividend has increased by 131.4% over the past five years.

AbbVie has performed better than the broader market year to date. The company's stock is down by 3.6% since the beginning of the year, while the S&P 500 is down by 11.2%. And since AbbVie is well-equipped to handle the ongoing crisis, I expect the pharma giant to continue outperforming the market in the foreseeable future. But AbbVie's long-term prospects also remain appealing, and in my view, the company's stock will continue to perform well long after the COVID-19 pandemic ends. In short, AbbVie is a pharma stock worth buying.