Please ensure Javascript is enabled for purposes of website accessibility
Log In Help Join The Motley Fool
Free Article
Join Nearly 1 Million Premium Members And Get More In-Depth Stock Guidance and Research
By Will Healy – May 10, 2020 at 12:36PM

Which retail giant offers a better value to investors?

Amazon (AMZN -3.03%) and Costco (COST -1.53%) have become two of the most influential retailers today. Amazon's growth has stoked fear across the retail sector. Yet despite that success, Costco has prospered amid the Amazon onslaught, continuing to increase both net sales and membership each year over the last five years.

However, these companies have succeeded by taking two completely different paths. Amazon has built an e-commerce empire spanning North America and much of the world. It can offer seemingly any item and ship most of its merchandise in a short amount of time. Still, even with Whole Foods and some Amazon-branded stores, it offers little to those who want or need to shop in a physical store.

Costco has built its following through physical locations. This allows Costco to provide both in-person and online shopping options. However, it sells only a limited number of items. Also, the company offers somewhat fewer options for fast shipping.

Due to these different approaches, Amazon and Costco do not compare as well as some might assume. Nonetheless, by contrasting their profitability, growth, and financial metrics, investors may get a better idea of which retail stock could earn higher returns. 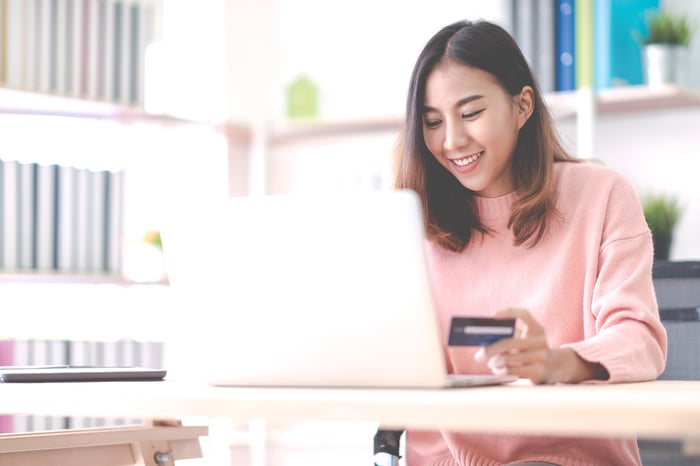 Although retail generates the majority of Amazon's revenue, it accounts for a small part of the company's profit (if the retail business reports positive earnings at all).

Instead, the majority of profit comes from Amazon Web Services (AWS), the company's cloud service. Increasingly, Amazon has also utilized its site to sell ads. This makes Amazon a tech company more than a retailer in many respects. Consequently, many now regard today's Amazon as a conglomerate.

Costco's business model works differently. Customers must pay an annual membership fee to make any purchase from Costco. This revenue source amounts to almost pure profit for the company.

However, in return, the company typically charges little more than the cost of goods sold and overhead, meaning Costco makes little money on what its customers buy. Costco also offers free shipping in many cases, though it could take days for the product to arrive.

Nonetheless, Amazon has taken the lead in mastering nonretail profit growth. Its source of earnings allows the company to defy the typical rule that large size makes high growth rates more difficult (as a percentage point of growth requires progressively higher absolute levels of profit growth over time). Since Amazon's main earnings driver, AWS, accounts for a relatively small part of the company's revenue, massive profit growth has become comparatively easy for a company with an approximately $1.19 trillion market cap.

With a market cap of $135 billion, Costco's smaller size has not necessarily brought growth advantages. That said, it does hold considerable room for expansion, at least internationally. Costco operates warehouses in most of the larger metro areas in the U.S. Hence, it may need to enter smaller markets currently dominated by Walmart's Sam's Club to enable continued domestic growth. However, Costco has enjoyed success in Europe, East Asia, and Australia, with comparable sales growth similar to what it has achieved in the U.S. and Canada. Due to this foreign-market success, saturation will not become a near-term worry for the company.

Certainly, earnings increases continue to drive the stock prices of both companies higher. Amazon stock has appreciated considerably more over the past five years. Nonetheless, both stocks look pricey based on their P/E ratios. Amazon's forward P/E ratio recently stood at 81.3. At around 32.5, Costco's forward multiple is significantly lower. 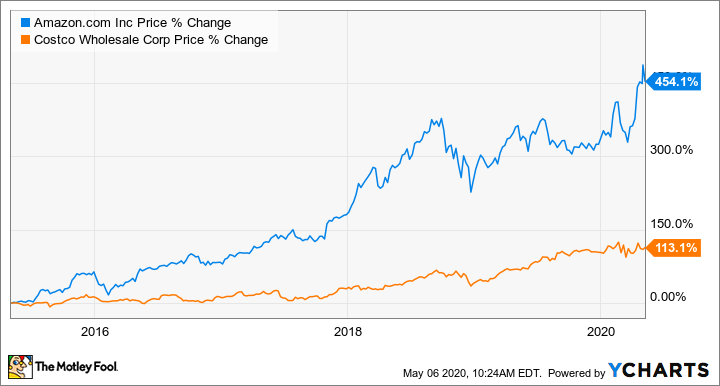 However, the value propositions of both companies appear different after considering potential earnings growth. For Amazon, analysts predict profit growth of 34% per year over the next five years. This significantly outpaces the 6.56% per year expected for Costco over the same period. Hence, the price-to-earnings-to-growth (PEG) ratio comes in at 2.4 for Amazon, compared with nearly 5 for Costco. Therefore, Amazon appears to offer more growth for the money.

Still, since Amazon does not offer a payout, the clear winner on dividends is Costco. Costco's current quarterly dividend amounts to $2.80 per share annually. This payout has risen for 16 consecutive years. Additionally, Costco occasionally pays a special dividend. The most recent one -- a one-time payment of $7 per share -- came in 2017. However, the regular dividend yields around 0.9%, well under the S&P 500 average of about 2%.

Both Amazon stock and Costco stock offer steady growth backed up by solid companies. Over the long term, Amazon and Costco should generate significant returns for their shareholders.

However, retail is a tough business, offering razor-thin returns to shareholders. For this reason, Amazon's ability to rely on AWS to provide the bulk of the company's profit is a significant advantage. This has helped Amazon grow much faster in recent years, and this rapid growth appears poised to continue. For this reason, I would recommend going with Amazon stock if I had to choose between the two.