Please ensure Javascript is enabled for purposes of website accessibility
Log In Help Join The Motley Fool
Free Article Join Over 1 Million Premium Members And Get More In-Depth Stock Guidance and Research
By Billy Duberstein – May 12, 2020 at 8:00AM

T-Mobile is taking share in consumer wireless, but its ambitions are much bigger.

Shares of T-Mobile (TMUS -2.01%) surged late last week after the company reported its first-quarter earnings. Though T-Mobile reported flat overall revenue growth, that was mainly due to store closures affecting low-margin equipment revenue, which was impacted by store closures due to COVID-19. Meanwhile, the company's service revenue, which is really the main driver for telecom profits, rose 5% in the quarter. And within that 5% growth, the most important category of branded postpaid service revenue grew an even higher 7%.

While 7% postpaid service revenue growth doesn't sound like anything special when compared with other high-growth technology names, in the wireless industry during a pandemic, that growth is downright heroic. In fact, T-Mobile accounted for 70% of the entire industry's growth in the first quarter, marking the 25th straight quarter it's led the industry in net additions.

However, the big driver of T-Mobile's stock price won't be its first-quarter numbers, but rather where it's going. The company just closed its huge acquisition of Sprint on April 1 after two years of regulatory scrutiny, which could potentially lead to even bigger and better gains down the road. With the integration of Sprint under way, T-Mobile is set to grow even faster by pursuing three big new avenues for growth. 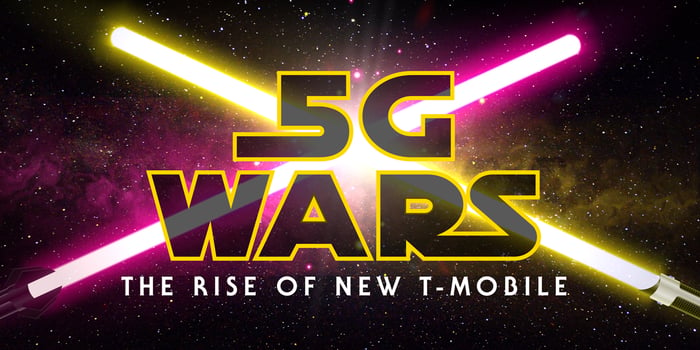 The quickest way T-Mobile could accelerate growth is by continuing to take more and more market share in the existing consumer wireless category. After all, during an economic downturn -- which we are definitely entering right now -- consumers will be looking for value whenever possible. That could mean switching to T-Mobile and away from Verizon (VZ -1.03%) and AT&T (T -1.42%), which generally offer higher-priced plans.

Verizon and AT&T have traditionally been known for better coverage and speeds. However, T-Mobile's years of investment have put its network's coverage very close to the two incumbents, and perhaps even better in some aspects, such as faster upload speeds.

As the nation starts to emerge post COVID-19, customers across the industry will likely be looking for better value in a tougher economic environment and we'll continue to be there for our customers when they need us most. It's who we are and it's what our Un-carrier brand stands for. I expect that AT&T and Verizon customers will most certainly be looking to get out from under their high monthly bills in search of a better value.

With Sprint now under its wing, T-Mobile not only acquired scale and synergies, but also received valuable wireless spectrum that it can use for its upcoming nationwide 5G network. 5G is the next generation of wireless coverage from 4G, and many technologists are predicting a huge step-change in capabilities, including lightning-fast speeds, low latency, and the ability to enable new applications that haven't been possible on mobile phones before.

According to management, T-Mobile is now loaded with low- and mid-band 5G spectrum -- double that of AT&T and nearly triple that of Verizon. In terms the highest-speed (but lowest-reach) millimeter-wave spectrum, management claims it also has more of that than AT&T.

"We're ready to leapfrog the carriers and network capability," Sievert declared. T-Mobile has been lighting up many cities across the country with its low-band spectrum since December, but has recently deployed its high-speed spectrum in Philadelphia and New York City.

A better network and lower prices means T-Mobile is well positioned for the current recession, and able to take more market share from the two big incumbents.

With an upgraded network and corporations looking to save on costs, it's also possible T-Mobile could potentially make inroads in the enterprise market. Enterprises have typically chosen to go with the proven, most reliable networks, and according to T-Mobile management, that's led to Verizon and AT&T controlling about 90% of the enterprise wireless market.

However, with T-Mobile adding network capabilities from Sprint and its own investments, and with the financial crisis making enterprises comb through their expenditures more closely, it's possible T-Mobile can achieve more enterprise wins going forward.

Management already said that it has been achieving "record quarters in enterprise and large government for the last couple of years, every single quarter," but of course that's off a very low base. With the combination of T-Mobile and Sprint, it's possible the combined company could accelerate its market share with enterprises, adding yet anther leg to its growth story.

Perhaps the biggest 5G opportunity is for T-Mobile to become your home broadband provider. Since 5G will promise broadband-like speeds and latency through wireless connections, T-Mobile has announced its ambitions to take on cable companies once its 5G network is rolled out more broadly, likely a year or more out.

Management made the point that the broadband industry is one of the least competitive industries in the entire country, with many areas having only one or two options. That's made the broadband and cable industries much less competitive than the wireless industry, which has four to five national carriers that aren't bound by geography. Sievert added:

The cable companies are good companies. They're good people, but it's the least competitive market in the history of man. ... We're itching to get in there, because we've got a value proposition that I think is going to resonate with millions of people to be able to bring 5G-based home internet access to people that have never had a choice.

Look out for T-Mobile

Since its 2013 rebranding as the Un-carrier, T-Mobile has aimed to shake up the complacent consumer wireless industry. Now armed with Sprint's spectrum and added scale, the New T-Mobile should continue its disruption of consumer wireless, while also taking aim at enterprises and even fixed broadband over the long term. That's why, after its post-earnings bump, T-Mobile still looks like a safe pick as the economy enters this downturn.