Please ensure Javascript is enabled for purposes of website accessibility
Log In Help Join The Motley Fool
Free Article Join Over 1 Million Premium Members And Get More In-Depth Stock Guidance and Research
By Rich Duprey - May 13, 2020 at 11:00AM

The two retailers have temporarily mended their fences but the end of the relationship is drawing near.

For a minute there it looked like J.C. Penney (JCPN.Q) was about to lose its business partner, Sephora, the beauty and skin care products giant owned by LVMH Moet Hennessy Louis Vuitton (LVMUY -0.97%). Last week, Sephora announced it wanted to end their agreement to operate store-in-store boutiques three years early.

The beauty specialist has been critical to the growth the troubled department store chain has been able to generate, driving traffic that has spilled over into retailer's aisles and clothing racks, but Sephora seems to believe J.C. Penney's precarious financial condition harms its brand, and it wants to make a clean break.

Although the two have temporarily patched up their differences, the more immediate question for investors is, if the two partners go their separate ways, can J.C. Penney survive? 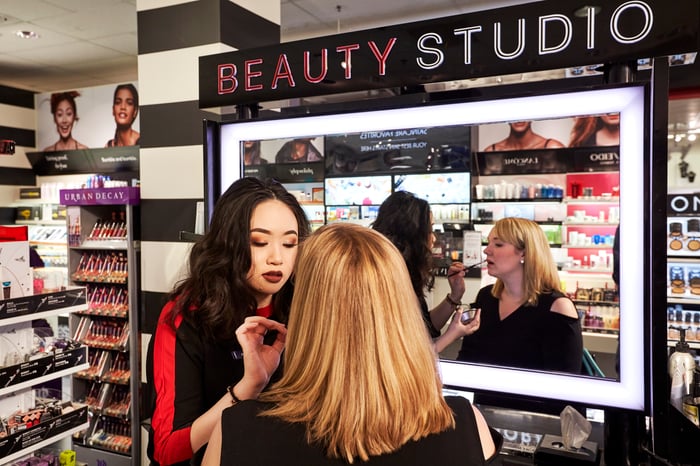 Sephora has been losing ground to Ulta Beauty (ULTA -1.63%) as the top beauty destination for teens, according to the latest survey from Piper Sandler, which found Ulta was the leading spot with 39% share while Sephora trailed in a distant second at 24%.

Just two years ago, though, the positions were reversed: Sephora was the leading beauty destination at 44%, and Ulta was in second at 28%. That's a stunning decline for the cosmetics company, and one it might pin on its partnership with J.C. Penney.

There are over 650 Sephora locations inside JCPenney retail stores, covering over three-quarters of the retailer's 850-store footprint. Yet same-store sales at the department store plunged 7.7% last year on top of the 3.1% decline in 2018. Sephora has approximately 2,000 stores worldwide, most of which performed well last year, gaining market share in various countries and pushing LVMH's selective retailing division to 5% organic revenue growth.

As primarily a mall-based retailer, J.C. Penney is suffering from declining foot traffic at shopping malls along with the larger weakness inherent in the retail sector generally. It charged Sephora was using the cover of the coronavirus pandemic to break the agreement.

In court documents, Sephora contends J.C. Penney breached their agreement when it furloughed the beauty company's employees and explored a potential bankruptcy filing without consulting Sephora. Sephora has not furloughed any of its employees during the crisis and notes, "Part of Sephora's brand value lies in its commitment to its personnel and reputation."

If J.C. Penney does go bankrupt, that amounts to an "express default" and Sephora would not need to pursue arbitration.

However, both sides have issued a press release stating they resolved their legal issues amicably and "have agreed to mutually beneficial revisions to their joint enterprise operating agreement." They don't specify what amendments were made, but presumably, even if J.C. Penney is still around in three years, its stores won't feature Sephora boutiques.

The retailer used to tout the critical nature of Sephora's business to its own, with CEO Jill Soltau noting a year ago the "very strong and very exciting" plans they had to grow together. Today, the tone has changed, as Sephora contends with Ulta's increasing encroachment on its territory.

Analysts at UBS claim Ulta has a store within a 10-minute drive of 78% of Sephora's boutiques inside JCPenney, most of which are stand-alone stores or in strip malls, so they're not reliant on the shopping mall driving traffic.

It's clear J.C. Penney desperately needs Sephora, and while the wolf at the door seems to have been held at bay for the moment, the fact they've amended their partnership means the horizon for this relationship has gotten much closer.

Assuming the retail apocalypse or the COVID-19 pandemic doesn't do in J.C. Penney sooner, the loss of Sephora will likely finish off the chain.