Please ensure Javascript is enabled for purposes of website accessibility
Log In Help Join The Motley Fool
Free Article Join Over 1 Million Premium Members And Get More In-Depth Stock Guidance and Research
By Bram Berkowitz – Updated May 13, 2020 at 4:13PM

If you are looking at JPMorgan Chase (JPM -2.04%) as a long-term investment, then I think this stock will always be a buy. It's the largest U.S. bank in total assets, and it has one of the most respected leaders in banking with CEO Jamie Dimon. The bank came out of the Great Recession in 2008 and had one of the best decades between 2010 and 2020 of any big bank.

However, if you asked me whether I would buy JPMorgan Chase right this second, the answer is slightly more complicated, because there is so much uncertainty in the air. There may be an opportunity to get the company at a lower price over the next few months. Let's investigate. 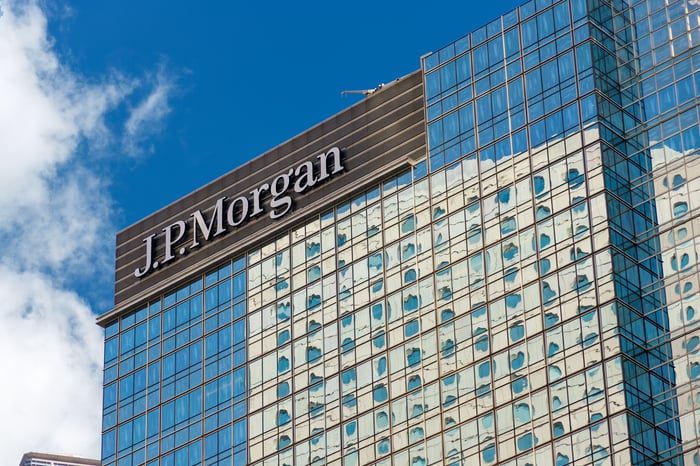 The bank reported a $2.9 billion profit in the first quarter of the year, significantly down from the $8 billion and $9 billion profits it has been reporting in prior quarters.

That's largely a result of the coronavirus pandemic and social distancing measures that have hurt all aspects of the economy from households to businesses. The pandemic forced JPMorgan to set aside $8.3 billion  to cover potential future loan losses, otherwise known as the credit provision. That is really a huge number when you consider that the single largest quarterly credit provision the banking giant took during the Great Recession was $8.6 billion.

I don't think banks have anywhere near the issues they had during the Great Recession, but this shows how truly devastating the pandemic has been to the economy, and what a problem it could continue to be. Executives at JPMorgan said they expect the cash they set aside to cover loan losses to continue to build in the second quarter, and riskier credit card loans make up 15% of the bank's loan portfolio. Additionally, there are still a lot of virus-related concerns that could be a threat to a big bank like JPMorgan. What if there is a second flare-up of COVID-19 cases, triggering more social distancing? What if a working vaccine is not available for two years? These factors could really jack up loan losses at the bank.

I also think there is a legitimate chance that JPMorgan might need to consider cutting its dividend at some point this year. A quarterly dividend for a bank like JPMorgan is a drop in the bucket because the bank has more than $220 billion in retained earnings.

The bank could have a number of bad quarters and still afford to pay its normal dividend. The issue is if capital levels go below a certain threshold, regulatory restrictions kick in. In the first quarter of the year, existing customers at JPMorgan -- concerned about their cash flow and liquidity -- drew down $50 billion on revolving lines of credit, and JPMorgan also approved $25 billion of new credit extensions.

That played a major role in reducing the bank's common equity tier 1 (CET1) capital ratio down 90 basis points (0.90%) in the quarter to 11.5%. The CET1, a measure of a bank's core capital to its risk-weighted assets, is a crucial metric when it comes to the dividend. Per regulators, JPMorgan must maintain a CET1 of 10.5% to avoid certain restrictions on capital distributions such as dividends. The 10.5% requirement is larger for JPMorgan than any other bank in the country; other large banks, like Bank of America, only need to maintain a CET1 of 9.5% or below. I'm not sure JPMorgan's CET1 will drop that severely again in Q2, but we still don't know how things will play out with the virus, and for all we know, there could be another round of physical distancing in the future.

Whether or not to buy

I'll reiterate that I always like JPMorgan for the long term, and I do think the banks are much better prepared than they were more than a decade ago. The problem is there are legitimate concerns that could create major issues for the bank depending on how long this public health crisis lasts. Additionally, if JPMorgan reports a credit provision similar to that of the first quarter, if it trims its dividend, or if the banks reveal some new credit issue, the stock could fall; it dipped below $80 per share in March. So you might be able to buy at a lower value, which would help your long-term returns.