Please ensure Javascript is enabled for purposes of website accessibility
Log In Help Join The Motley Fool
Free Article Join Over 1 Million Premium Members And Get More In-Depth Stock Guidance and Research
By Jon Quast – May 13, 2020 at 8:39AM

Staying away from this stock because of its high valuation has been really wrong so far.

Restaurant chain Wingstop (WING -3.35%) stock is up over 40% in 2020. Despite that stellar performance, the company is still not on many investors' radars. But there's something you should know that nobody else does: Since going public in June 2015, Wingstop has been the best restaurant stock on Wall Street.

Going public at just $19 per share, the stock is up over six times in value in just under five years -- beating all other stocks in its industry. Why has it performed so well, and is it still a good investment today? 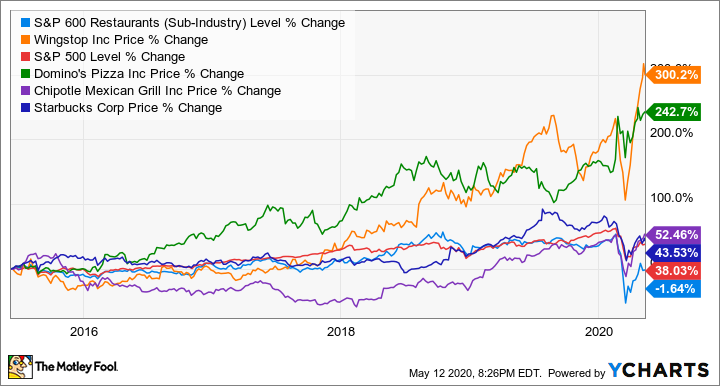 Data by YCharts. *Chart tracks Wingstop from $30.59 per share, where it closed its first day of trading, not its IPO price.

Wingstop is profitably growing its restaurant chain, which is the No. 1 reason for the stock's outsized performance. Growth can be tracked in two ways: The first is comparable-sales growth. For Wingstop, this metric tracks restaurant sales at locations open at least 52 weeks, and the company's comparable sales have grown for 16 consecutive years.

The second area of growth is unit expansion -- opening new restaurant locations. Wingstop consistently increases its restaurant locations by a double-digit percentage with 2019 delivering 10.6% unit growth. Now with over 1,400 total locations, Wingstop is setting its sights on 6,000 restaurants worldwide.

Regarding profitability, the restaurant-level economics are attractive. Consider that Wingstop has commitments to open over 600 new U.S. locations -- its biggest pipeline ever. And 80% of those commitments come from existing franchisees -- those who have the best understanding of the business. By committing to open more Wingstop locations, it suggests these restaurants are worth the investment.

For its part, Wingstop collects franchise revenue (and revenue from a few company-owned locations), turning a healthy profit. The company has been profitable every year as a public company, consistently delivering a double-digit net profit margin.

When a restaurant stock grows its business profitably, shareholders are rewarded.

Pattern recognition is helpful in investing. Assessing winning traits can help you find tomorrow's winners. Wingstop is a profitable growth stock like Chipotle and Starbucks, but it does diverge from these two companies in one key aspect.

Wingstop uses a primarily franchised operating model, with around 98% of all restaurants owned by franchisees. By contrast, Chipotle uses an exclusively company-owned model, and Starbucks is split evenly between company-owned and licensed. The franchised model has afforded Wingstop the advantage of rapid growth with minimal investment, as well as predictable revenue.

But here's why Wingstop's operating model matters for investors. In the first quarter of 2020, the company generated $55 million in revenue. Of that, $16 million is for the company's advertising fund, and it will be spent -- there's no profit. Revenue from franchisees was $24 million, but revenue from company-owned locations was $15 million.

In other words, 2% of Wingstop locations generated 63% as much revenue as the other 98%. And these mere 32 company-owned locations accounted for 27% of total company revenue.

Herein lies the downside of the franchise model. Wingstop's financial gains are limited, with each new franchised location adding a minuscule amount to the top line. So even as this company expands toward a long-term goal of 6,000 locations, that target isn't as lucrative as it would be for a restaurant operating with a company-owned model. 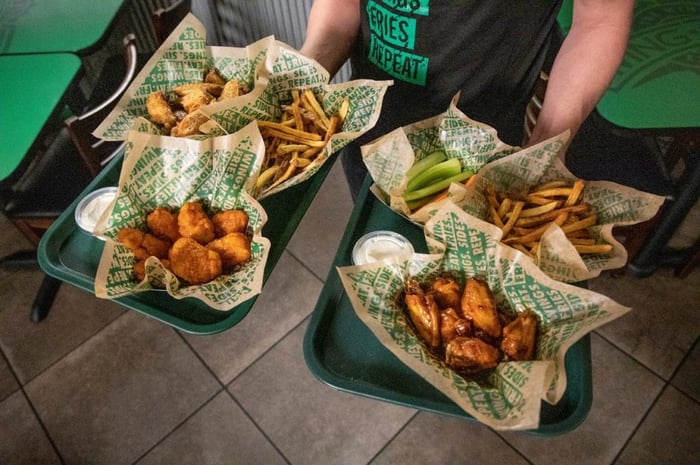 Franchised restaurant stocks aren't intrinsically bad for investors as long as they're valued accordingly. However, Wingstop is one expensive stock. Looking at just one metric, it trades at 165 times trailing earnings, and 116 times next year's earnings estimates. Granted, I've always thought the shares were expensive, and that has deterred me from this market-trouncing investment. So far, the valuation argument against Wingstop has been wrong.

That said, valuation still matters to me in Wingstop's case. The franchise model makes it harder for the company to grow into its valuation. I love the business execution, but the stock price doesn't make sense.

Even if I wouldn't buy today, I constantly reevaluate my thesis on Wingstop, because I believe many winning stocks keep winning. That's why you should know that Wingstop has outperformed all other restaurant stocks since going public.