Please ensure Javascript is enabled for purposes of website accessibility
Log In Help Join The Motley Fool
Free Article Join Over 1 Million Premium Members And Get More In-Depth Stock Guidance and Research
By Donna Fuscaldo – May 14, 2020 at 11:48AM

Facebook (META 4.05%) is teaming up with a handful of telecommunications companies to build a huge subsea cable to bring Internet access to the African continent and the Middle East.

Dubbed 2Africa, the initiative will be one of the biggest subsea cable projects the world has seen, with the undersea cable expected to be 37,000km long, "nearly equal to the circumference of the earth," Facebook said. 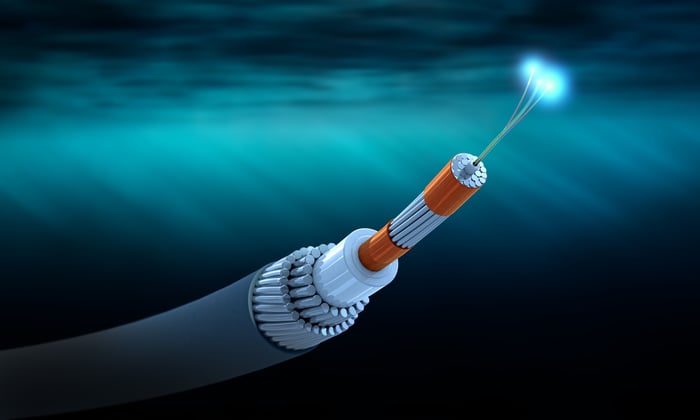 It will interconnect Europe, the Middle East, and 21 landings in 16 African countries. The group, which also includes China Mobile, MTN GlobalConnect, Orange, Telecom Egypt, Vodafone, and WIOCC said the undersea cable will go live in 2023 and 2024. It will deliver more capacity than all the subsea cables serving Africa today.

"2Africa is a major element of our ongoing investment in Africa to bring more people online to a faster internet," Facebook's vice president of network infrastructure Najam Ahmad said in a press release announcing the initiative. The social media network operator notes that Africa is the least connected continent on the planet with only a little more than one-quarter of its 1.3 billion people connected to the Internet.

Once the cable is completed it will bring reliable Internet access across Africa, supplement demand for capacity in the Middle East, and support the growth of 4G, 5G, and broadband on the African continent, says Facebook. Facebook didn't say how much money it's investing in the project. However, it builds on other investments it's made in South Africa, Uganda, Nigeria, and the Democratic Republic of the Congo.

The tech stock is the latest technology company to set its sights on Africa. Last year, Twitter (TWTR 2.71%) CEO Jack Dorsey said he planned to live in Africa for several months out of the year, although that that plan was put on hold because of the COVID-19 pandemic. Meanwhile, Alphabet's (GOOG 2.02%) (GOOGL 1.98%) Google is developing Equiano, a subsea cable that will connect Africa with Europe.