Please ensure Javascript is enabled for purposes of website accessibility
Log In Help Join The Motley Fool
Free Article Join Over 1 Million Premium Members And Get More In-Depth Stock Guidance and Research
By Zhiyuan Sun - May 15, 2020 at 6:18AM

This mid-cap biotech is developing a new type of cellular immunotherapy, and its potential has attracted the attention of many institutional investors.

Unlike many other mid-cap biotech companies, shares of Fate Therapeutics (FATE 0.71%) are almost entirely owned by institutional investors. Just what exactly does the company have in its pipeline that could entice so much interest from smart money?

As of now, over 90% of the company's 78 million shares outstanding are owned by institutional investors, representing a more than $2 billion bet that the company's pipeline candidates will be successful. As many biotech investors know, mid-cap biotech companies have significant risks associated with their clinical programs, especially when their leading candidates are only in phase 1, as the case with Fate Therapeutics. 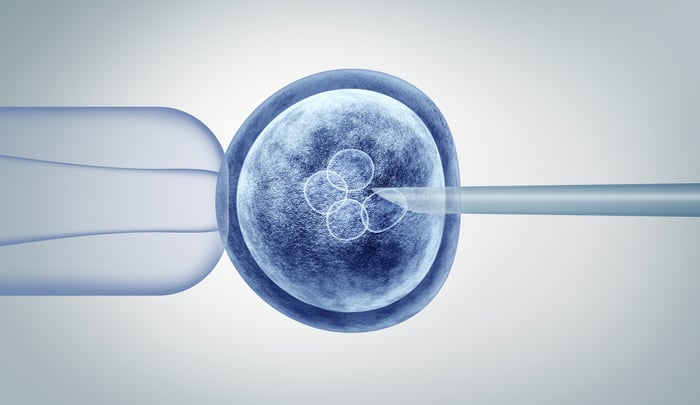 So what makes the company so special?

The company has garnered so much interest because it's at the forefront of developing the next generation of cellular immunotherapies. The method being investigated by biotechs and researchers around the world is chimeric antigen receptor T-cells (CAR T-cell) immunotherapy, which is rather complicated and inefficient. First, blood plasma from the body of a patient or a suitable donor is withdrawn. Then, it is separated into plasma and T-cells. Next, millions of T-cells need to be genetically engineered to target specific receptors within cancer cells. Finally, those activated T-cells are infused into the patient's body, where they (hopefully) will produce an immune response that attacks the cancer.

The whole process can cost up to $425,000 per patient and takes between two to three weeks. And that's only the overhead costs: After mark-ups and profit margins are factored in, one course of CAR T-cell treatment can cost up to $1.5 million. Hence, there exists a dire need for cancer immunotherapy options that are both effective and affordable -- and Fate Therapeutics intends to fill that void.

The company claims it has developed a new generation of cellular immunotherapies based on induced pluripotent stem cell (iPSC) technology. Using this method, a single stem cell clone can morph into more than 200 different types of cells via genetic engineering, which can then be mass-produced and stored. When cancer patients need a specific type of antibody in their system, they would be able to request the corresponding iPSC on demand from a cell bank.

This was truly a remarkable innovation, and the company wasted no time in defending its intellectual property. Fate Therapeutics currently possesses more than 250 patents for its iPSC technology and has six experimental therapies in clinical trials. One of those is FT500, which is in phase 1 clinical trials.

FT500 is a biologic composed of natural killer cells, which provide the first line of defense against tumors and other pathogens, derived from a clonal master iPSC. In preclinical studies, the biologic showed strong expressions in activating receptors in the body's immune cells against cancer cells.

An interim data release in December revealed that FT500 had been well-tolerated by 12 patients, with no safety or serious autoimmune issues. In addition, six out of 11 patients in both monotherapy and combination arms witnessed stable disease progression, mean that their tumors neither grew by more than 20% in size nor shrank by more than 30%. It is worth noting patients were only eligible for the trial if they had advanced-stage cancers that had failed to respond to standard immune checkpoint inhibitors such as Opdivo and Keytruda. The study is expected to conclude in 2022.

In my opinion, Fate Therapeutics offers investors more than enough reasons to buy. First, it has hundreds of patents covering a new, potentially revolutionary, immunotherapy technology. Second, it has the backing of institutional investors that together own the large majority of the company. Third, the company's financials are sound: it has more than $300 million in cash and equivalents on its balance sheet, no debt, and operating expenses of $100 million annually. That gives it roughly three years to produce some success with its clinical programs.

Finally, the company possesses a fair shot of achieving phase advancement for its pipeline, and it was recently further de-risked when it inked a multibillion-dollar collaboration agreement with Johnson & Johnson (JNJ -2.07%). In all, this is a great stock that biotech investors who have a tolerance for risk will not want to miss.