Biopharma companies can certainly test even a long-term investor's patience, given that these are the kind of investments that can take quite awhile to bloom. Years of clinical trials, scrutinized results, and a hoped-for (but not guaranteed) approval from the U.S. Food and Drug Administration are all part of the lifecycle. If clinical trials repeatedly fall short of expectations or an FDA approval fails to materialize, it can be money down the drain for shareholders. If a breakthrough happens, however, it can make investors very rich.

Fate Therapeutics (FATE -2.39%) is hoping for the latter result for its immunotherapy treatments of B-cell lymphoma -- cancer that forms in a person's white blood cells. But after its latest clinical trial results, is the company's stock a nice pick for bargain hunters? Or is this a sign to get out while you can? 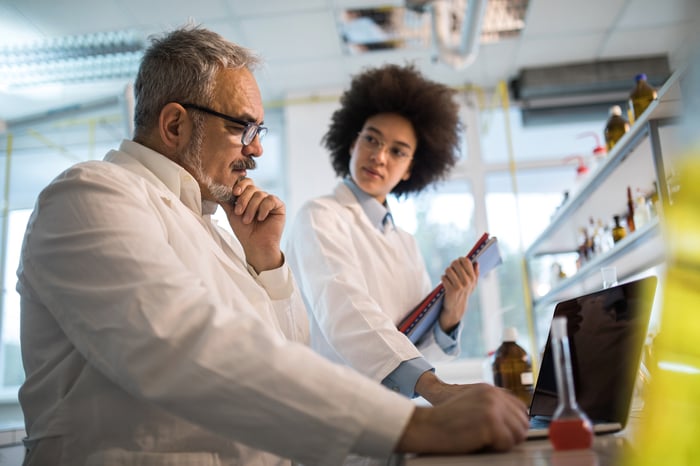 The company is in early testing of two treatments, labeled FT596 and FT516. On Aug. 19, Fate delivered preliminary data from early clinical trials showing some effectiveness for both drugs in treating blood cancer, but results fell short of some investors' expectations.

FT596 was tested on patients as a monotherapy as well as in combination with a single dose of the drug rituximab, in both cases after the patient received three days of chemotherapy. Out of 14 total patients, 71% showed measurable response. Of those 10 patients, half of them showed signs of complete response, meaning the indications of cancer had gone away.

For FT516, eight patients out of 11 showed a measurable response, with 75% of those showing signs of complete response. Unfortunately, though some patients continued to show complete response for as long as nine and a half months, a handful of patients who had previously shown complete response began to show further progression of their cancer at about the four-month mark after treatment.

And that's what has some investors and analysts concerned about the effectiveness of the treatment dosage. Jefferies analyst Michael Yee suggested to clients that additional data is needed in regards to durability. That additional data is expected to be presented by Fate at the American Society of Hematology conference, to be held Dec. 11-14.

The lack of data to provide confidence for investors led the bottom to drop out of the stock over the two-day period from Aug. 18 to Aug. 20. The stock price dropped by over 26%, from $91 down to $67, bringing its year-to-date total decline to 45% from a high of $121 in January. Depending on how you look at it -- either as a bargain hunter or as an anxious shareholder -- this could be good news or bad news.

The good news was that the initial drop hit a bit of a cushion; the stock bounced back a bit over the past few weeks, providing some signs of an opportunity to get in on the dip.  The bad news is that its low of $67 has once again been tested in the past few days, which could mean more declines are on the way.

One positive signal that may give individual investors hope is that Cathie Wood, owner and founder of ARK Invest, recently purchased over 240,000 shares of Fate. The shares are now part of the top holdings in Wood's ARK ETFs, with the ARK Genomic Revolution ETF (ARKG -3.09%) holding 55,000 shares -- the fourth-highest asset weight in the top 10 holdings -- and the ARK Innovation ETF (ARKK -3.45%) holding 186,000 shares. For those who may not be familiar with Wood or these ETFs, the ARK Genomic Revolution ETF was the leading ETF in returns for 2020 at 180% for the year.

I'm not one to disagree with Wood; after all, those funds had an amazing 2020, and the recent tanking of Fate's stock price does offer bargain hunters a dream opportunity. But with both of its treatments still in early clinical trials using a small sample size of patients, Fate may not be the investment of choice for those who aren't willing to take a bit of a risk on pharmaceutical companies.

Perhaps the recent dip will provide an entry point for opportunistic investors looking to take that risk. And with September being Blood Cancer Awareness Month according to the Leukemia & Lymphoma Society, we might possibly see an increased awareness about the disease that could lead to further interest in the stock from investors. This could potentially allow for the stock price to hold steady or even start to climb once again.

For now, I'll be looking toward December and any news coming out of the ASH conference presentations. If new data supports a positive outlook, this stock has certainly set itself up as a bargain.