Please ensure Javascript is enabled for purposes of website accessibility
Log In Help Join The Motley Fool
Free Article Join Over 1 Million Premium Members And Get More In-Depth Stock Guidance and Research
By Dan Caplinger – May 15, 2020 at 4:54PM

Friday brought further volatility to the stock market, although most major benchmarks managed to finish the day in the green. Losses earlier in the session seemed to come from nervousness about whether reopening parts of the economy in some states will lead to a coronavirus backlash or help to get things back toward some semblance of normal. Overall, though, investors have shown their willingness to be optimistic even in the face of extremely ugly economic data. By the close, the Dow Jones Industrial Average (^DJI 2.74%), S&P 500 (^GSPC 2.81%), and Nasdaq Composite (^IXIC 3.21%) had picked up fractions of a percent.

There are plenty of stocks that have seen significant declines despite having strong long-term prospects, and many of them have a real chance of bouncing back better than ever at some point in the future. However, many traders with a short-term focus prefer to play in dangerous waters. Today, roughly 270 million shares of J.C. Penney (JCPN.Q) traded hands, and the retail stock put up a gain of more than 20%. Yet that rise was only enough to bring its stock price to between $0.23 and $0.24 per share. Moreover, most of those following the stock believe that Penney's bankruptcy is inevitable, leaving those who are seeking to day-trade the department store's shares holding the bag. 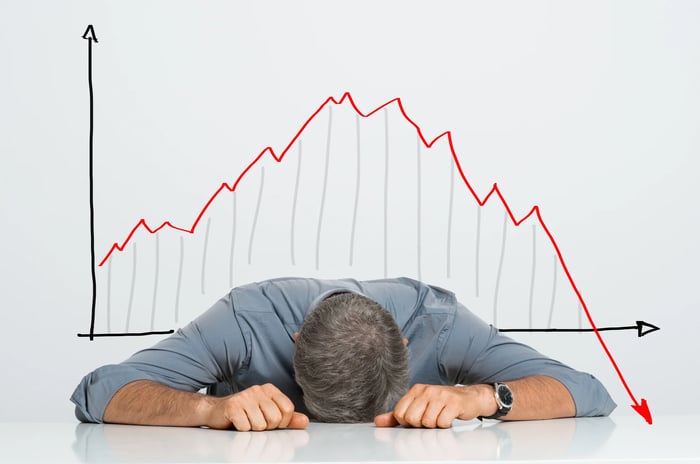 The news that apparently made some traders happy to send J.C. Penney's share price higher was that the retailer chose to make an interest payment on its debt. When exchange officials halted the stock for news earlier in the session, many investors believed that the company had chosen this moment to file for bankruptcy. That didn't happen, and so some traders concluded that the retailer had made some meaningful gesture toward avoiding an ignominious end.

The appeal of dying companies

J.C. Penney isn't the first stock to see so much popularity among investors. Turn the clock back to 2009, when General Motors (GM 7.17%) had finally given up the ghost and filed for bankruptcy protection in the immediate aftermath of the financial crisis. The bankruptcy process was relatively quick, and it created a new company with new shareholders. The automaker did its best to make clear that its old stock was no longer associated with the new entity bearing the General Motors name, and that creditors would have claims that exceeded the old company's ability to pay, leaving old shareholders with nothing.

Even so, countless traders continued to trade shares of what became called Motors Liquidation Company. Often, good news for the new GM translated into upward moves for the old stock. Those gains were ill-conceived, as eventually, shareholders of the old pre-bankruptcy General Motors ended up getting completely wiped out.

Short-term traders measure their success in minutes, not in years, and for them, just about any stock serves as well as any other. Long-term investing is a smarter way to make money. Whether a bankruptcy filing comes next week or next year, J.C. Penney's long-term prospects are almost nonexistent. Smart investors should steer clear of the lottery ticket trade that's happening right now in the retail stock.