Please ensure Javascript is enabled for purposes of website accessibility
Log In Help Join The Motley Fool
Free Article Join Over 1 Million Premium Members And Get More In-Depth Stock Guidance and Research
By James Brumley - Updated May 18, 2020 at 8:41AM

Reliability is far more important than oversized dividend yields for most retired income-seekers.

The mix of retirement income sources has changed dramatically over the years. Not too terribly long ago, employer pensions supplied much of an individual's needed income after their working years had ended. Social security checks were something of an afterthought. Savings and investments were a rarity. Now, pensions are a rarity, and social security checks are modest. An individual's own savings and investments are more likely to carry much of the weight during their golden years.

This ultimately means retirees will have to figure out how to make their investments drive reliable income for what is now, on average, 18 years' worth of retirement. For many, it can span even longer.

To that end, here's a look at three top dividend stocks retirees, or near-retirees, may want to consider. Not only are they built to last, they're built to grow their payouts in step with population and economic growth. 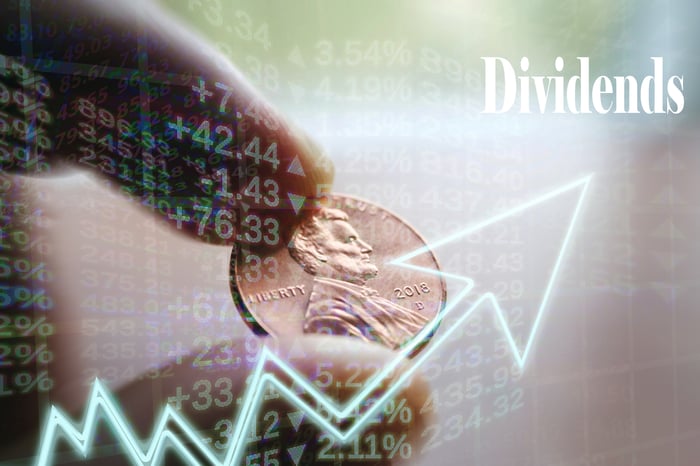 McDonald's turns into a cash machine

It's not a bad company, although McDonald's (MCD 1.12%) isn't exactly a name one hears very often as an income-oriented prospect for a retiree. There's a largely overlooked nuance with the fast-food chain, however, that's making this pick even more potent as a dividend holding.

It's not a name that needs much in the way of an introduction. Golden arches can be found all over the world. With more than 36,000 locations operating in over 100 countries and driving more than $21 billion worth of revenue per year, no other restaurant brand even comes close to matching the consistent reach this long-established name enjoys.

The detail that most investors may not fully recognize: McDonald's isn't really in the restaurant-ownership business anymore. It's now fully focused on the franchising business.

Most McDonald's restaurants have always been owned by franchisees, for the record, but the company has slowly been shedding its company-owned locations. As of the most recent quarter, roughly 93% of the fast-food chain's stores are owned by franchisees, versus just a little more than 80% four years ago. That makes McDonald's role in the business a lower-risk, higher-margin operation.

The parent organization collects recurring franchise fees and a percentage of sales whether or not those sales are profitable for the restaurant owner, and if nothing else, McDonald's food is always marketable. The end result is a less volatile bottom line that wouldn't force McDonald's to rethink its dividend except in the most dire of circumstances that we may never actually see again. For perspective, during the company's fairly typical 2019, per-share earnings of $7.88 easily covered the total dividend payout of $4.73. All the company has to do to extend its 44-year streak of increased dividends is figure out where to put new restaurants and how to increase the average ticket size and foot traffic for existing locations.

Investors may not have heard of Crown Castle International (CCI 1.57%), but there's a pretty good chance most of them have utilized its product without even realizing it. Crown Castle is the United States' biggest owner of cellphone towers you see peppered all across the landscape. All told, the company owns more than 40,000 of these structures, leasing use of them to wireless names like Verizon and AT&T.

It's not exactly a high-growth business from where the industry stands right now, but it's certainly a bulletproof business to be in. Consumers aren't likely to give up their mobile phones at any point in the foreseeable future. In fact, the advent of 5G and the subsequent, looming explosion of the Internet of Things is finding an already-strained wireless infrastructure that's forced the use of fixed lines to complete all the connections now being made.

More importantly to investors, Crown Castle International is a solid dividend play. It's also set up as a real estate investment trust (REIT), which is a tax-advantaged way to get more of its recurring income into shareholders' hands. And while it may not yet qualify as a dividend aristocrat, Crown Castle has upped its regular dividend for five consecutive years.

Johnson & Johnson does it all

Finally, a very familiar Johnson & Johnson (JNJ -1.10%) arguably has a place in many retirees' portfolios.

Most investors know the company's consumer-oriented product lines like Johnson & Johnson baby shampoo. What most investors may not realize is how many other essential brands the company also owns. J&J is the name behind Tylenol, Band-Aid, Benadryl, Neutrogena, Aveeno, and others. These products are perpetually marketable. Yet those consumer goods drive less than 20% of the company's total sales.

The lion's share -- over half -- of last year's top line came from sales of prescription pharmaceuticals, including blockbusters like Stelara and blood thinner Xarelto. The Johnson & Johnson name stands shoulder to shoulder with its peers on the drug-development front, and what it may lack in its pipeline, it can buy. Last year, it earned more than $15 billion worth of income.

Put them all together and what you have is a highly diversified healthcare company. Moreover, a solid pharmaceutical pipeline and a deep medical-device bench usually means it's got something new to sell, supporting a dividend that currently stands at 2.7%. Its annual payout has now grown for 58 consecutive years.