Please ensure Javascript is enabled for purposes of website accessibility
Log In Help Join The Motley Fool
Free Article Join Over 1 Million Premium Members And Get More In-Depth Stock Guidance and Research
By Jennifer Saibil – May 19, 2020 at 9:40AM

After a fabulous first quarter, the stock keeps gaining.

Chipotle Mexican Grill (CMG 2.09%) has been hot recently. Yesterday the stock hit a record high, going over $1,000 per share for the first time.

The Mexican-food restaurant chain has been able to adjust its operations to handle digital orders and move into takeout and delivery mode. Most orders during the the period were to-go, and only around 100 restaurants closed during the current pandemic. 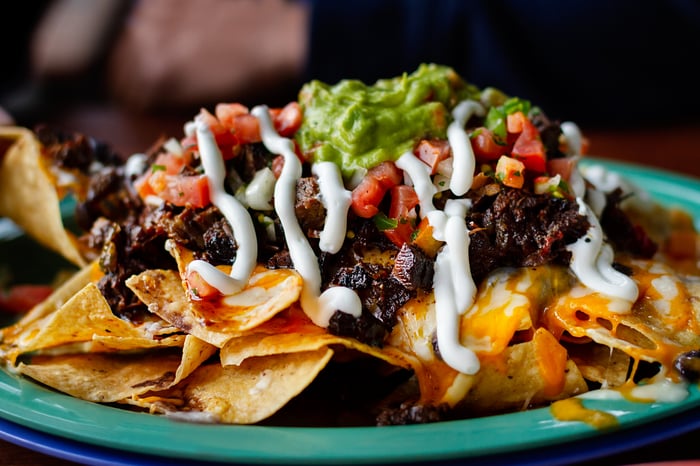 Chipotle released first-quarter earnings results on April 21 for the period ending March 31. Revenue increased 7.8% to $1.4 billion and comps increased 3.3%, which reflected weaker comps in March. Digital sales increased 80% and accounted for 26.3% of sales.

One of the highlights of the first quarter was an increase in loyalty program members. In the month before the earnings release, daily sign-ups almost quadrupled. In the first quarter, 65% of new members were new to Chipotle, and 61% of previously in-store members joined digital. The company opened 28 stores during the first quarter and has another 49 in progress.

CEO Brian Niccol said, "Cultivating a better world takes commitment from all of us, and we are fortunate to have the financial strength to weather this storm."