Please ensure Javascript is enabled for purposes of website accessibility
Log In Help Join The Motley Fool
Free Article Join Over 1 Million Premium Members And Get More In-Depth Stock Guidance and Research
By David Butler - May 19, 2020 at 7:45AM

Adidas may present opportunities for those with the patience to ride out the economic turmoil.

Whether athletic retailer adidas (ADDYY -2.22%) can be a millionaire-maker stock depends partly on the amount of money you have to invest. The company most certainly had the potential to be a millionaire-maker stock in 2005 when it was selling for $20 a share. Prior to the recent market pullback, adidas shares were sporting a 578% return on that initial investment. Even now, long-term investors still have a 345% gain over the last 15 years. That handily outpaces the S&P 500's 126% return over the same time frame.

Today, the company is very matured. The likelihood of tremendous year-over-year stock gains has been reduced. It would take a fairly large initial investment in adidas stock to realistically expect gains to reach a million dollars in a reasonable amount of time (say 10-15 years).

Still, adidas is a good stock for the long-term investor. 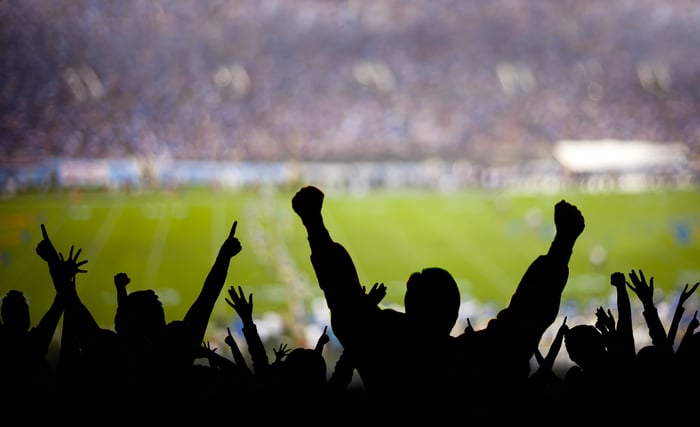 In recent years, we've seen adidas push itself into a top-tier position among athletic apparel and footwear makers in the U.S. market, eclipsed only by Nike (NKE -2.46%). Revenue in the last few years has had solid gains, with the athletic company bringing in 23.64 billion euros last year, a 7.9% year-over-year growth rate. Net income gains have been more impressive over the last five years, with double-digit annual increases. Last year was the slowest for earnings growth, with a 12.3% increase in net income to 1.92 billion euros. Still, the European athletic company has done well.

Then came the COVID-19 pandemic. First-quarter results included a big 19.2% slide in year-over-year sales to 4.75 billion euros. Gross profits fell 25.6% to 2.34 billion euros, and margins dipped to 49.3% versus 53.6% a year ago. Earnings were basically erased by the economic fallout from the pandemic, with net income falling 96.5% to 26 million euros, or 0.13 euros per share.

Not surprisingly, the major area of impact in the first quarter was Asia. Total sales there fell 44.9% on a currency-neutral basis to 1.2 billion euros. The quarter reflects the outbreak's origination and progression. Europe became adidas' major source of sales in the quarter, with a smaller 8.1% decline to 1.43 billion euros. North America actually saw an increase of 0.8% to 1.2 billion euros.

Looking into the second quarter, this stability in Europe and North America is far less likely. The spread of the virus became far broader and the economic shutdowns that ensued will show up in Q2 results in a more pronounced way.

Shares of adidas are traded in the U.S. as American Depository Receipts that represent common shares, and they currently sport a price of $108.77. The company reported earnings of 10 euros per share ($10.86). Based on a trailing earnings basis, that means adidas is trading at roughly 10 times last year's earnings. Assuming that sales performance can return to those levels once the current economic shock concludes, there is nice value here.

The time to buy?

We still do not fully understand the economic impact that the coronavirus has had on the world economy. We've seen figures about unemployment and gross domestic product, but boiling that down to the individual markets, sectors, and companies isn't that simple. Just because the economy is beginning to reopen doesn't mean spending will return promptly. Many executives and policymakers have indicated that a return to normal will be much slower than previously hoped for. Some suggestions have even prompted the idea that a true economic return won't present itself until the end of next year.

That type of forecast will create a prolonged period for companies like adidas to experience a hit to growth. It is possible that this could lead to even lower prices those companies.

Finding millionaire-maker stocks is not an easy or common thing. Unless you have $100,000 to invest in a stock, you typically have to invest in a younger, high-risk company in order to attain that kind of success. What one can do is find companies with strong track records of growth over the long term. adidas has proven its ability to do that. It's the king in European sports apparel and shoes, and it has done well in North America and China, where sales had been doing double-digit growth prior to this pandemic. That growth story can come back. It simply requires the patience to wait it out.