Please ensure Javascript is enabled for purposes of website accessibility
Log In Help Join The Motley Fool
Free Article Join Over 1 Million Premium Members And Get More In-Depth Stock Guidance and Research
By Timothy Green - May 19, 2020 at 12:43PM

Walmart's quarter was one for the record books, and Home Depot reported strong sales but weak earnings.

Highly anticipated earnings reports from mega-retailers Walmart (WMT 0.21%) and Home Depot (HD 2.09%) came on Tuesday morning, but strong sales trends from both companies failed to drive a rally for the Dow Jones Industrial Average (^DJI 1.63%). The Dow was down about 0.1% at 11:50 a.m. EDT today.

Walmart stock managed a small gain after the company reported revenue and earnings that easily beat expectations, while Home Depot shares slipped due to heavy costs related to the pandemic. Both retailers pulled their outlooks for the full year.

While many retailers were hit hard by the pandemic during the first quarter, Walmart's place as the top seller of groceries in the U.S. led to some spectacular results. Total sales jumped 8.6% to $134.6 billion, handily beating analyst estimates by $3.7 billion. Comparable-store sales in the U.S. soared 10%, driven by strong demand for food, consumables, and health and wellness products. 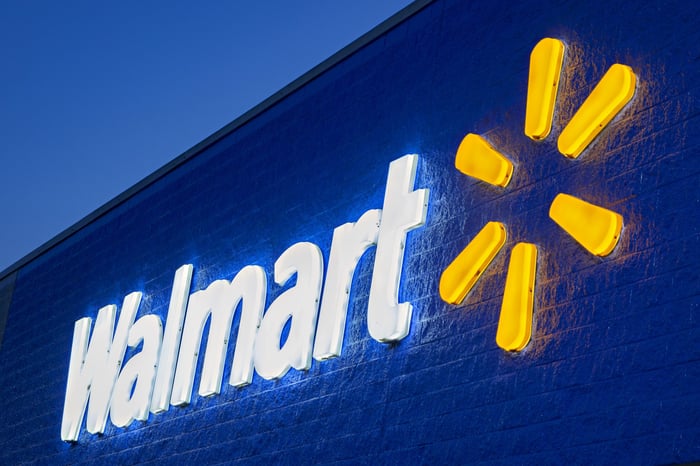 The e-commerce business was on fire during the first quarter, posting 74% sales growth. Grocery pickup and delivery was a key component of that growth, along with nongrocery products on Walmart.com. With the Walmart.com brand performing well, the company is discontinuing Jet.com. Walmart acquired Jet in 2016 to accelerate its e-commerce efforts, although it's already been de-emphasizing the brand.

Walmart reported adjusted earnings per share of $1.18, up from $1.13 in the prior-year period and $0.09 better than analysts were expecting. The company said that costs related to the pandemic totaled nearly $900 million during the quarter.

While Walmart's first-quarter results were exceptionally strong, it's unclear how long the bonanza will last. Consumers stocked up on the essentials during the early stages of the pandemic, but that behavior is now likely fading as the economy begins to open back up. Walmart withdrew its full-year guidance, as there are simply too many variables to accurately predict anything about the quarters ahead.

With the U.S. likely already in a recession, the severity and duration of which are unknown at this point, Walmart's results for the rest of the year are unlikely to match those of the first quarter. But the company's focus on providing rock-bottom prices for consumers puts it in a better position to weather the storm than most other retailers.

Shares of Walmart were up about 0.8% by late Tuesday morning. The stock is now just 3.7% below its 52-week high.

Costs add up for Home Depot

Home improvement retailer Home Depot saw solid demand in the first quarter, but earnings took a hit from the pandemic. Sales were up 7.1% to $28.3 billion, ahead of analyst estimates by $690 million. Comps jumped 6.4%, with U.S. comps rising 7.5%.

The bottom line was a different story. Home Depot took a $640 million after-tax hit due to its response to the pandemic, which included expanded paid time off for hourly employees, weekly bonuses, and extended dependent-care benefits. Earnings per share came in at $2.08, down from $2.27 in the prior-year period and $0.18 below analyst expectations.

Like Walmart, Home Depot is suspending its guidance for the full year. The company said that sales trends were strong in the first two weeks of the fiscal second quarter, but uncertainty related to the pandemic required the guidance to be pulled.

Home Depot may be experiencing a surge in demand from those stuck at home undertaking do-it-yourself projects, but how that demand will evolve during a deep recession is unclear. Home Depot stock was down 1.7% by late Tuesday morning. Shares are just 2.7% below their 52-week high.