Please ensure Javascript is enabled for purposes of website accessibility
Log In Help Join The Motley Fool
Free Article Join Over 1 Million Premium Members And Get More In-Depth Stock Guidance and Research
By Leo Sun – May 20, 2020 at 11:18AM

Uber’s rumored all-stock offer for Grubhub values the company at $5.7 billion. Can it afford to make a higher offer?

Grubhub's (GRUB) stock recently popped after Uber (UBER 2.53%) reportedly approached the food delivery company with a buyout offer. The Wall Street Journal claims Uber is offering 1.9 shares of its own stock for each Grubhub share. At the end of the trading day on May 19, 1.9 shares of Uber were worth $63.46, which only represented a 10% premium to Grubhub's price of $57.43.

Grubhub's stock was trading in the mid-$40s before the news broke on May 12. Grubhub reportedly rejected Uber's initial offer, and the Journal claims Uber could raise its offer to 1.925 shares -- which would likely fall short of Grubhub's rumored demand for 2.15 shares.

A merger between Grubhub and Uber Eats, which both trail behind DoorDash in the U.S. food delivery market, makes strategic sense -- but how much higher can Uber possibly raise its offer? 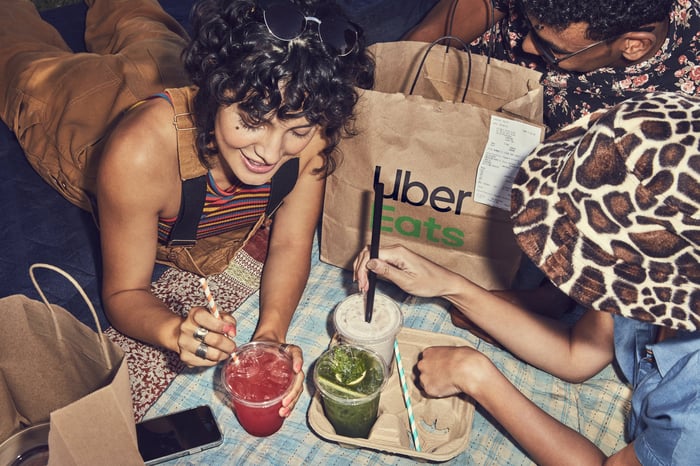 How much is Grubhub really worth?

Grubhub controlled 23% of the U.S. food delivery market in April, according to Second Measure, while Uber Eats held a 22% share. DoorDash controlled 45% of the market.

Grubhub is more profitable than Uber and DoorDash, but its growth in daily average grubs (meals), active diners, and gross food sales all decelerated sharply over the past year. Pricing pressure from its rivals and higher investments in R&D and marketing also throttled its bottom-line growth:

Those dismal numbers explain why Grubhub has shed more than 40% of its value over the past two years. Grubhub didn't provide any revenue guidance for the second quarter, due to the COVID-19 crisis, but it expects its adjusted EBITDA to plunge 91% annually to $5 million. Analysts expect its revenue to rise 9% this year but for its adjusted earnings to dip into the red.

Grubhub currently has an enterprise value of $5.2 billion. That total includes $668 million in long-term debt. It currently has an EV/EBITDA ratio of 85 -- which represents its highest ratio since its IPO in 2014. However, its EV/revenue ratio of 4 has remained broadly stable over the past six years: 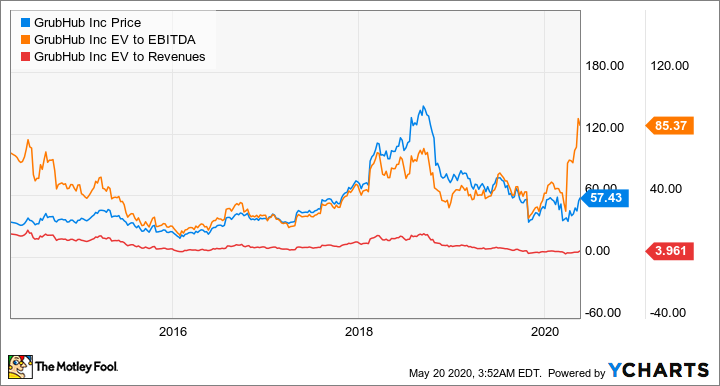 That loss, along with losses at its freight unit and other businesses, wiped out the Rides segment's adjusted EBITDA of $581 million. On a GAAP basis, Uber's net loss widened from $1 billion to $2.9 billion. It ended the quarter with $8.2 billion in cash and equivalents and $831 million in short-term investments. 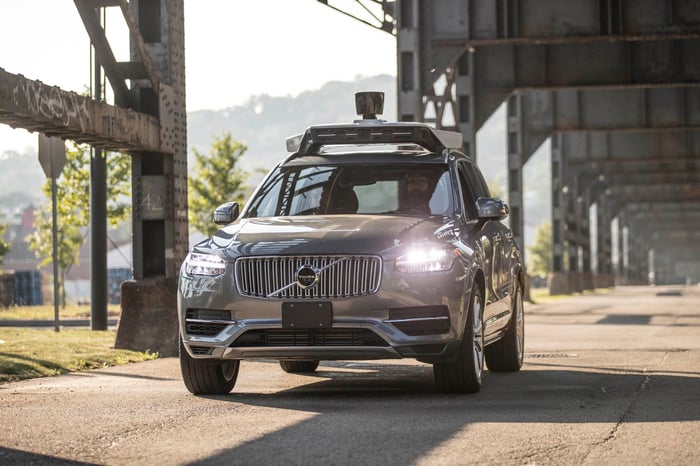 Uber could theoretically make a cash offer for Grubhub, but it would be a terrible financial move: it's still shouldering $5.7 billion in long-term debt and posting massive net losses every quarter. That's why Uber is reportedly pursuing an all-stock offer.

Uber, which has an enterprise value of $56.4 billion, ended last quarter with 1.72 million outstanding shares. Uber might issue additional shares to cover the purchase, which would dilute its current shares and boost its current EV/revenue ratio of 3.9.

The long-term benefits could outweigh the short-term stock dilution. The merged platform would cut costs by eliminating redundant services, boost its take rate per order, tighten its grip on restaurants, and ramp up the pressure on DoorDash. Uber's development of autonomous vehicles could also eventually reduce fees for itself, diners, and restaurants.

Uber's 1.9 share offer values Grubhub at about $5.7 billion. Grubhub's rumored demand for 2.15 Uber shares would value itself at about $6.5 billion, or $71.81 per share. Uber might eventually meet that offer, since it clearly needs to merge the two delivery platforms to counter DoorDash.

It won't be easy for Uber to seal this deal. Grubhub seems resistant to Uber's advances, and antitrust regulators could kill the merger. Nonetheless, uniting the two struggling platforms is a smart and necessary move that could stabilize the volatile food-delivery market.