Please ensure Javascript is enabled for purposes of website accessibility
Log In Help Join The Motley Fool
Free Article Join Over 1 Million Premium Members And Get More In-Depth Stock Guidance and Research
By Jeremy Bowman – May 20, 2020 at 10:24AM

The hotel metasearch company sees some very challenging months ahead.

Like the rest of the travel sector, Trivago (TRVG -0.83%) saw sales tumble in the first quarter as the coronavirus pandemic swept across the world, impacting markets in Asia, Europe and the Americas.

Revenue in the quarter fell 33% to 139.8 million euros, and the company dialed down its marketing expenses by a similar percentage as travel demand collapsed. Overhead costs including salaries still ate into profits, and its Adjusted EBITDA results swung from a 21.4 million euro profit a year ago to a 0.6 million euro loss. It also recorded a 20.7.6 million goodwill impairment charge, leading to an unadjusted net loss of 214.3 million euros. The company warned that second-quarter results would be significantly worse than the first quarter's, and said that revenue loss bottomed out at 95% year-over-year in the last week of March and remained that way through April, though it has seen a modest recovery since then as European countries have begun to reopen.

The company is making a number of significant changes to adapt to the crisis, and it was frank about what it expected in the near future -- which holds implications for Booking Holdings (BKNG -1.18%) and Expedia (EXPE -2.81%), Trivago's two biggest bidding partners, as well as other players in the industry. 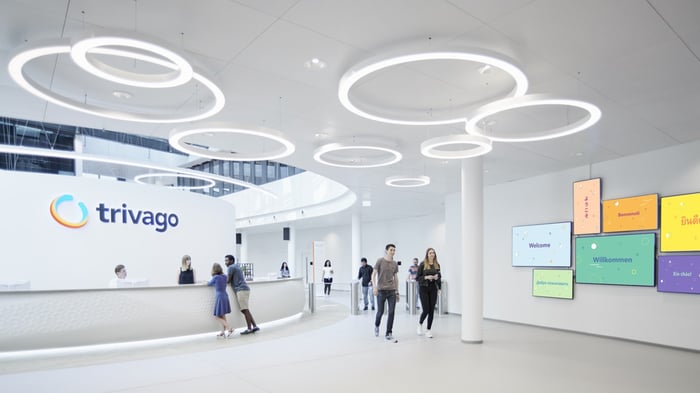 A shift to local travel

With COVID-19 remaining a threat even as countries begin to reopen their economies, Trivago has begun to see a shift to local and domestic travel rather than international vacations. Consumers are looking to escape from cities and go to more rural areas. CEO Axel Hefer noted that in Germany, where Trivago is based, trips from German cities to the German coast and mountains were becoming more common compared to trips to Mediterranean beach destinations in countries like Spain, Italy, and Greece, which Trivago would usually be more likely to see this time of year.

As it expects the trend towards local travel to persist for the near-to-medium term, Trivago is adapting its product to inspire short-term trips that can be planned spontaneously. CEO Axel Hefer said on the earnings call that traditionally Trivago's product had worked best for travelers who knew what they were looking for, but with travel demand having changed drastically, it's changing the way it attracts customers. CFO Matthias Tillman said in an interview that the new product would launch in July and would offer things like top-ten destinations within 200 miles to engage travelers and present them with options that they may not have been previously considering.

In line with the trend in local travel, the company also expect cars trips to predominate over airplane trips for the foreseeable future, which spells bad news for an already battered industry, though it could help some smaller and independent hotels and overlooked regional travel destinations.

In recent years, one of Trivago's most important strategic initiatives has been building up its inventory of alternative accommodations from sites like Airbnb, VRBO, and Homeaway to offer travelers a more diverse array of lodging options, which has been important as Airbnb has disrupted the traditional hotel industry. Trivago grew the number of alternative accommodation units available from 250,000 in Q3 2017 to 2.3 million in Q3 2019, and that diversification could be paying off now.

On the earnings call, Hefer said that there was no shift from hotels to apartments in Q1, but in April a trend in searches began to move more toward apartments -- though it was on low volume, so the company doesn't necessarily assume that will be a long-term trend. Nonetheless, the shift toward apartments and home rentals could owe to the fact that so many people's lives have been uprooted by the crisis and people are looking for long-term rentals while they have to adjust to temporary changes, whether that's kids being out of school or adults working from home.

That could point to an earlier recovery for home rental sites like Airbnb and Expedia-owned VRBO and Homeaway than for hotel chains and accommodations more dependent on business travel, a segment that looks set to be a laggard in the travel recovery.

The recovery will be a slow one

Though there is still a lot of uncertainty around the pandemic and the economic recovery, Trivago struck a cautious tone on near-term recovery. The company said full-year revenue would be down by more than 50% in 2020, and it would have a significant Adjusted EBITDA loss. For 2021, it also expected revenue below pre-crisis levels.

Commenting on a broader economic recovery, management said in its shareholder letter:

While some European countries have taken first steps back toward normality with some relaxations to the existing shutdown, we believe a cautious and gradual approach will be important to avoid a "second wave" of infections. Rebuilding in strides, a safe travel experience and our customers' trust in traveling should be the main objective of our industry for the months to come.
As a result, we expect to experience only slowly recovering volumes, which will be depressed by the economic impact of the crisis, limited and restricted leisure offerings in destination and the only gradual return of perceived safety in traveling.

Because of safety concerns and its economic sensitivity, travel may be the last industry to bounce back from the crisis, and it is unlikely to make a full recovery while the virus is a risk.

Trivago isn't standing still during the crisis. The company is introducing new ad products like sponsored listings and display ads to better engage advertisers and consumers, and it's cutting costs, with layoffs expected to reduce personnel and related costs by 20 million euros in 2021. With its variable cost structure -- it spends the vast majority of its revenue on marketing -- Trivago is nimble enough to survive the crisis, and Hefer expected the company to emerge as a more efficient organization, saying, "We are using the time of low travel activity to fundamentally improve our value proposition both toward our users and our advertisers and leave the crisis stronger than we entered."

There will be a significant shakeout in the travel industry during the crisis, but Trivago is less at risk than companies with high fixed costs like hotel chains and airlines, and that could be a crucial advantage over the coming months.