Please ensure Javascript is enabled for purposes of website accessibility
Log In Help Join The Motley Fool
Free Article Join Over 1 Million Premium Members And Get More In-Depth Stock Guidance and Research
By Jennifer Saibil – May 21, 2020 at 7:00AM

The financial services company was strong going into the pandemic, but some of its businesses look risky right now. What can we expect?

The COVID-19 environment hasn't been particularly kind to bank stocks, with low interest rates and fears of defaulting inducing a strong sell-off. Other types of financial stocks, specifically those related to e-commerce, are doing much better.

Synchrony Financial (SYF -2.25%) is a combination of these two, a consumer bank mixed with a fintech platform that gives it a differentiated model. So while the stock price has suffered, the business is in a pretty safe place. Does that make this the right time to buy shares? 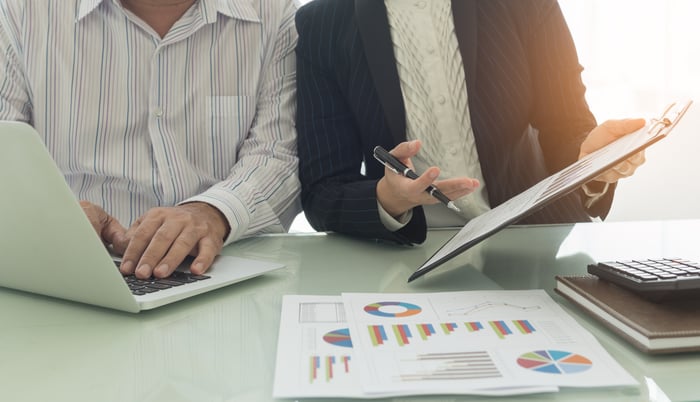 When customers don't buy and can't pay their bills

Synchrony offers a host of behind-the-scenes financial solutions for retailers and others that need to outsource these apps and programs. One of its best-known services is underwriting private-label credit cards for companies such as Amazon, The Gap, and PayPal.

In the beginning of the quarter, the company had double-digit volume growth, higher than the previous two quarters. That held through mid-March, when stay-at-home orders went into effect and volume plunged 26%. World sales dropped 27% at the same time, and those trends continued into April. The restaurant, entertainment, travel, and gas categories, which have all slowed in the post-restriction time frame, make up 27% of retail card consumer world sales. Those segment decreased in the post-restriction time frame, but essentials, such as grocery, discount, and pharmacy increased during that time.

To make itself more competitive in this market, Synchrony offers several digitally enhanced services, such as SyPI, a customizable plugin for a company app that lets customers perform all sorts of financial functions from their mobile phones; Alexa voice payments; and Setpay, which is a mini-loan that a customer can apply for to make a one-time purchase.

While spending activity has slowed down, banking activity has become more important as consumers try to keep their cash safe. Synchrony's banking division ended the quarter with $65 billion in deposits, up 1% year over year. The bank has 75.5 million active customer accounts and $19.2 billion in liquid assets.

CFO Brian Wenzel spent a significant amount of time on the company's conference call discussing the company's readiness for this crisis as compared to the Great Recession. At that time, Synchrony was still a division of General Electric, from which it was spun off in 2014.

Since then, Synchrony has created a more disciplined, rigorous process for underwriting and assessing credit, which has resulted in a clearly improved system. It now uses sophisticated data algorithms that include an assessment of 4,000 attributes for creditworthiness. Today, 73% of the company's portfolio has a FICO credit rating of more than 660, as opposed to 61% in 2008. Only 9% has a rating of 600 or below, as compared with 19% in 2008. This is more apparent in new accounts, of which 80% are above 660 and only 1% are below 600.

The portfolio is well-diversified by industry, and the company has expanded many of its other products so it's not only tied up in credit cards. So while a crisis of this magnitude will undoubtedly affect customers' ability to pay their credit-card debt, Synchrony has spent the past 10 years sharpening its systems so it's better protected for a time like now.

Synchrony's share price has fallen by roughly half this year (as of Wednesday's close), a good deal more than the big banks, and is below its initial public offering price of $23 almost six years ago. It might look like a risky business right now, and investors may be worried. Consider that Synchrony's charge-off rate, which is how much it expects to lose in defaults, was 6% during the first quarter, double the industry average of 3%.That means that it may be dealing with a higher level of defaults than other credit card underwriters, especially if the economy stays closed for a lengthy period of time.

But while private-label credit cards have more risk than large, established card companies, they also hold lower balances, which evens out for Synchrony. It also has a growing consumer banking division and in general a lot more business up its pipeline.

What's more, the company has many other strengths and is keeping its dividend throughout the pandemic. As disappointing as the first-quarter results looked, they were relatively clean considering the financial atmosphere, and the company is better-equipped for this pandemic than it was for the financial crisis.

The share price will probably continue to be volatile in the short term, reflecting the state of the economy, so it's not a must-buy today, but the price should improve when the economy does, so you don't want to wait to get in while the price is still suppressed.