Please ensure Javascript is enabled for purposes of website accessibility
Log In Help Join The Motley Fool
Free Article Join Over 1 Million Premium Members And Get More In-Depth Stock Guidance and Research
By Rich Duprey - May 22, 2020 at 10:30AM

It's a partnership that could benefit both.

Amazon.com (AMZN -5.14%) always seems to be rumored to be acquiring something, but could the bankruptcy of J.C. Penney actually result in a deal being made? Industry site WWD reports anonymous sources saying the e-commerce giant has boots on the ground in Plano, Texas, the department store's hometown, and is negotiating with the retailer.

Whether Amazon makes a deal or not, and regardless if it's for part of the company or the whole thing, there is some good sense in it. 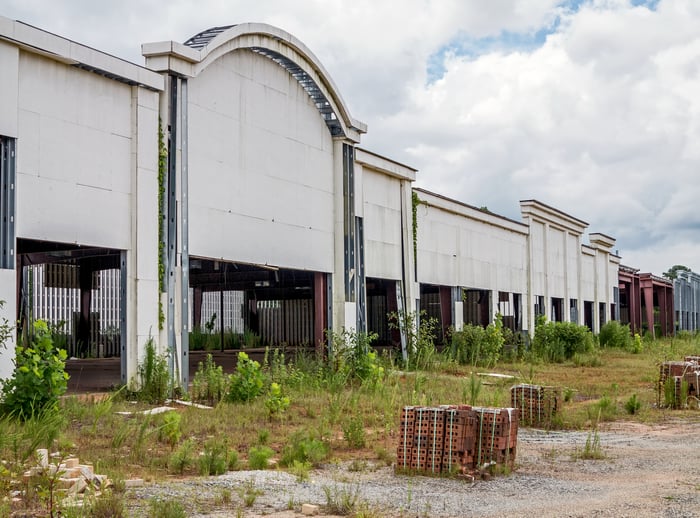 We've seen this story before, however. Amazon's various partnerships with Kohl's (KSS -2.28%), for example, were supposedly a precursor to buying the retailer, though nothing materialized and there remain questions about how effective the relationship really is for Kohl's. But with J.C. Penney, Amazon could gain some vital business operations and real estate that would further its own ambitions, particularly to build up its apparel business.

While many of the retailer's stores are in shopping malls, which are also declining in importance, it does have approximately 30 freestanding locations, which Amazon could convert into distribution centers.

And for all those stores that do exist in malls, J.C. Penney is planning on closing around 30% of them, or more than 240 of its nearly 850-store portfolio. The retailer said in its bankruptcy filing that those that remain would "represent the highest sales-generating, most profitable and most productive stores in the network."

J.C. Penney also said e-commerce would become a "bigger driver of enterprise sales," which would expand to $2.3 billion in 2024 from a base of $1.5 billion last year.

Yet that's just so much wishful thinking on the part of J.C. Penney and its CEO, Jill Soltau. It could have delivered greater sales gains before now if it was so easy, but more often than not, the department store has been an industry laggard in digital sales.

For years its sales stagnated while peers like Kohl's and Macy's were recording double-digit gains. And Ron Johnson's tenure as CEO, while viewed as a failure for many other reasons, also sought to diminish the importance of online sales in favor of those made in-store.

That slapdash approach to e-commerce doesn't prove the retailer can successfully navigate the waters on its own.

A chance for renewal

Soltau recently noted more than 80% of J.C. Penney's sales are made in its physical stores, though nearly 90% of its customers begin the purchase process online. The inability to close the deal online suggests the store is missing something in its selection, presentation, or both.

Though there remains value in the 118-year-old brand, it is not resonating with today's consumer, and Amazon buying the company could inject new excitement.

A "J.C. Penney by Amazon" that stocked a new, broad selection of apparel as well as electronic gadgetry could make the retailer interesting again. It also would help Amazon build on its leadership position in online apparel sales, having surpassed Walmart for the top spot last year.

Some of J.C. Penney's best-selling brands are its own, such as St. John's Bay and Arizona, and private-label goods have helped build Amazon's own business. It now offers over 100 Amazon labels that account for 1% of sales.

As much as there is to recommend Amazon buying J.C. Penney, others might be interested as well.

While J.C. Penney may be more than they want to chew on (it had more than $8 billion in debt at its bankruptcy filing), the department store chain has a presence in one-third of Simon's malls.

Conversely, if Simon or Brookfield think they can fill J.C. Penney's stores with other tenants that would pay much higher rents (much as Seritage Growth Properties has done with Sears stores), they might not mind the closures so much.

A full sale could happen, and Amazon could be the buyer, but taking on the burden of a seriously troubled business may be more than what the e-commerce giant wants.