Please ensure Javascript is enabled for purposes of website accessibility
Log In Help Join The Motley Fool
Free Article Join Over 1 Million Premium Members And Get More In-Depth Stock Guidance and Research
By David Jagielski – Updated May 22, 2020 at 12:33PM

We've been here before.

There's a lot of optimism in the cannabis industry surrounding the Health and Economy Recovery Omnibus Emergency Solutions (HEROES) Act. The key reason: It includes the Secure and Fair Enforcement (SAFE) Banking Act. If the HEROES Act passes the Senate, it will send pot stocks rallying, because it will make it easier for U.S. cannabis companies to access banking services, reducing their need to hold cash. It would also signify an important step forward toward the legalization of marijuana at the federal level. But as exciting as it sounds, investors shouldn't get ahead of themselves, and here's why:

The HEROES Act will help provide relief to many Americans, but it's a loaded, complicated document that's more than 1,800 pages long. It includes areas relating to student loan forgiveness, rent and mortgage assistance, stimulus payments, unemployment benefits, and of course, cannabis. One area that's particularly controversial is the bill's offer of assistance to undocumented immigrants.

Although the bill passed the House, more than a dozen Democrats still opposed it. There's even less hope that it will pass a Republican-controlled Senate. 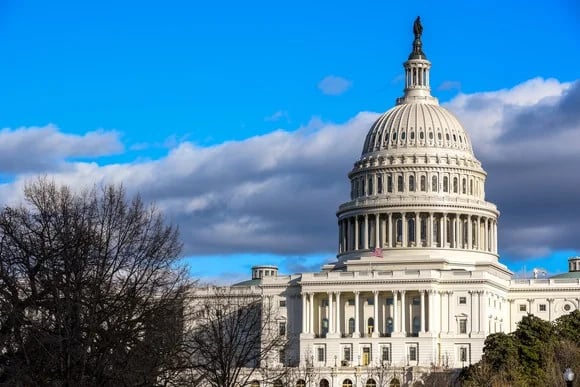 Just having cannabis in the bill may be enough of a reason for the Senate to reject it. The SAFE Banking Act was passed in the House months ago, and it's gone nowhere since then. Republicans haven't shown much of an interest in moving marijuana reform along, even though the SAFE Banking Act won't legalize pot.

There's little doubt that another stimulus bill will pass given that the COVID-19 pandemic is still weighing down the economy, but that doesn't mean this bill will be the one to make it through. The more complex a bill is, the more debating there will be -- and the less likely that it'll pass without revision. And with the HEROES Act, one of those revisions could very well involve cannabis.

Simply providing cannabis companies with access to COVID-19 relief is already a struggle. They're currently excluded from stimulus packages that aim to help small businesses because pot remains illegal at the federal level. On April 23 in the House, Reps. Earl Blumenauer and Ed Perlmutter (both Democrats) introduced the Emergency Small Business Health and Safety Act, which would give cannabis companies access to relief packages. However, it's unclear how likely the bill is to pass, and there's been no movement on it since it was first introduced.

COVID-19 is the priority for the country right now, and it would be very optimistic for cannabis investors to expect that significant marijuana reform can just slide in right along with a stimulus bill. On its own, the SAFE Banking Act ran into challenges and opposition. Inside of a $3 trillion relief bill, it would be nothing short of a miracle for this act to make it through the Senate. President Trump previously called the  relief bill "dead on arrival," suggesting that the Democrats know it's not likely to pass.

Cannabis investors need to focus on the reality that exists today, and that means no SAFE Banking Act and no easy access to the banking system. And that's bad news for large multistate operators such as Curaleaf Holdings (CURLF -7.14%), which has 54 dispensaries and operates in 17 states. Having easier access to banking would help the company access loans and avoid relying on the equity markets to raise cash, especially as it continues to grow. Issuing shares is just not as attractive as it was a year ago, as Curaleaf's stock price has crashed 40% in 12 months. Although that's better than the Horizons Marijuana Life Sciences Index ETF (HMLSF -8.37%) and its 65% decline, it's still a brutal performance.

But that isn't standing in the way of the company's ambitious growth initiatives. The company closed the acquisition of wholesale cannabis brand Select on Feb. 3, which gives. Curaleaf a strong presence on the West Coast, including in California, Arizona, Oregon, and Nevada. On March 2, Curaleaf announced it would be acquiring BlueKudu, which produces cannabis edibles in Colorado, expanding the company's reach yet again. And most recently, on May 11, it entered into an agreement to enter Oklahoma by partnering with Mango Cannabis, which will distribute Select brand products at two of its dispensaries within the state.

The good news for Curaleaf investors is that its situation isn't dire, with or without the SAFE Banking Act. In the company's amended first-quarter results, released on May 20, Curaleaf reported cash and cash equivalents totaling $176.4 million. And with the company burning through just $1.6 million in cash from its operating activities over the past three months, it's in a good position during the pandemic. However, that could change several months from now, and that's why having the federal government's support -- whether it's through relief bills or access to banking -- could go a long way toward making the stock a much safer investment.

Curaleaf's an attractive pot stock to buy; in Q1, its sales were up 174% from the prior-year period. But with a slowing economy and more challenging times ahead, the stock still carries a lot of risk today.