Please ensure Javascript is enabled for purposes of website accessibility
Log In Help Join The Motley Fool
Free Article Join Over 1 Million Premium Members And Get More In-Depth Stock Guidance and Research
By Rachel Warren – May 22, 2020 at 7:30AM

This stock is making big moves on the heels of positive interim data from phase 1 human trials of Moderna's COVID-19 vaccine candidate.

It's been a monumental few days for Moderna (MRNA -0.21%). Its stock experienced a significant spike on Monday after the pharma giant announced that phase 1 trials for its prospective COVID-19 vaccine, mRNA-1273, showed promising interim results. Shares closed almost 20% higher on Monday compared with last Friday's final price and were up nearly 340% year to date when the closing gong rang. Meanwhile, the Dow Jones Industrial Average (^DJI 0.04%) gained over 900 points on Monday, an increase of just under 4%.

Just hours after releasing positive initial data for its coronavirus vaccine candidate, Moderna also announced that it was issuing a massive secondary offering of more than 20 million new shares at $76 per share. The offering was pending closure as of market close on Thursday, and the company anticipates it to bring in $1.34 billion. The company plans to use most of these proceeds to fund its prospective coronavirus vaccine, mRNA-1273, and other mRNA-based candidates in its drug pipeline.

When the closing bell rang on Tuesday, Moderna stock was up about 273% year to date and down about 10% from Monday's close, a clear signal that some of the initial furor surrounding the company's announcement of phase 1 data had leveled out. To gain a clearer picture of where this stock stands as a current and future investment opportunity, let's take a closer look at the drug company's most recent financials and the latest developments in its race to develop a coronavirus vaccine. 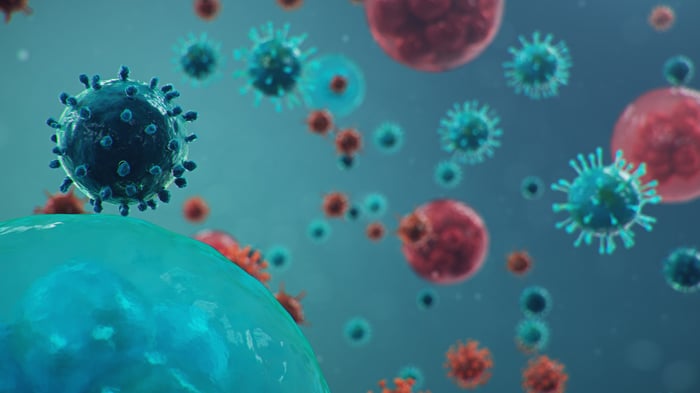 In its first-quarter results May 7, Moderna reported revenue that was down almost 48% year-over-year and sales totaling $8.4 million.In Q1 2019, the company reported sales of $16 million.The company closed the first quarter of 2020 with $1.7 billion in cash on the books and net losses of more than $124 million.

Apart from its mRNA-1273 coronavirus vaccine candidate, Moderna has an impressive portfolio of prospective drugs and vaccines in its development pipeline. The company has 23 mRNA candidates in the developmental stages, and 13 have entered clinical studies so far.

One of the most notable candidates Moderna has in the works is its Zika virus vaccine, called mRNA-1893, which showed promising interim data in its phase 1 clinical trial on humans.During the phase 1 study, the vaccine candidate was administered in two doses to participants with and without viral antibodies. No significant adverse reactions were noted.

Also of note, Moderna finished enrollment for the phase 2 dose-confirmation study of its cytomegalovirus (CMV) vaccine candidate, mRNA-1647, and is planning a phase 3 study.CMV is a common virus transferred from mother to child during gestation. Moderna is also working on a vaccine for the Epstein-Barr herpes virus, mRNA-1189.

The latest on the COVID-19 vaccine front

Naturally, Moderna's warp-speed efforts to develop a coronavirus vaccine have garnered the most attention of late, and the company has shifted much of its focus to moving this candidate to phase 2 and 3 studies. Moderna dosed its first participant with its COVID-19 vaccine candidate back in March, in a phase 1 study spearheaded by the National Institutes of Health. On May 12, Moderna announced that it had received a "fast track" designation for its coronavirus vaccine from the FDA and that phase 2 trials were imminent, with phase 3 studies to start at the beginning of this summer.

Then, on Monday, Moderna released positive interim data from its phase 1 study. Study participants were divided into three groups of 15, with one group receiving 25 micrograms of the vaccine, one group 100 micrograms, and one group 250 micrograms.On the 43rd day of the study, the group that was administered 25 micrograms of the vaccine candidate showed binding antibodies in their blood that were close to the number of antibodies found in actual coronavirus patients. In comparison, the majority of participants administered 100 micrograms had binding antibodies far exceeding those found in patients diagnosed with the illness. All participants were between 18 and 55 years of age.

These interim Phase 1 data, while early, demonstrate that vaccination with mRNA-1273 elicits an immune response of the magnitude caused by natural infection starting with a dose as low as 25 µg [micrograms]. ... [T]hese data substantiate our belief that mRNA-1273 has the potential to prevent COVID-19 disease and advance our ability to select a dose for pivotal trials.

So, what comes next? Using the data gleaned from its phase 1 study, Moderna is altering its upcoming phase 2 study to focus on two groups of participants, one dosed with 50 micrograms and the other dosed with 100 micrograms of the COVID-19 vaccine candidate.The company is also going to incorporate a 50-microgram dosage level for each group of participants in its current phase 1 study.Moderna is hoping to use its phase 2 study to target the correct dosage level for the phase 3 study, which it is hoping to start in July.If all goes well in phase 3, Moderna intends to pursue regulatory approval.

If Moderna's vaccine candidate turns out to be effective, it would also mean an immense boost to Moderna's top and bottom lines, likely raising the drugmaker's future valuation and creating substantial gains for shareholders. But there may still be hurdles ahead.

These are, of course, questions that healthcare investors will hope to see answered in the coming weeks and months as Moderna advances clinical studies of its coronavirus vaccine candidate. In the meantime, those who do not yet own the stock may wish to hold off until further results are in.