Please ensure Javascript is enabled for purposes of website accessibility
Log In Help Join The Motley Fool
Free Article Join Over 1 Million Premium Members And Get More In-Depth Stock Guidance and Research
By John Bromels – May 24, 2020 at 11:30AM

The natural gas fuel company may be close to a turnaround.

When you think "clean energy," you probably picture rows and rows of solar panels, or maybe a wind farm or hydroelectric dam. But none of those energy sources (yet) can easily create vehicle fuel, especially not for heavy-duty vehicles like trucks or buses.

Enter Clean Energy Fuels (CLNE 6.54%), which provides natural- and renewable-gas-based fuels for vehicles. The stock has, frankly, been a long-term loser, with shares down 86.6% over the last 10 years. However, maybe that makes now the perfect time to buy.

Let's dig a little deeper into this oddball of the energy industry to see if it looks ready to break its losing streak. 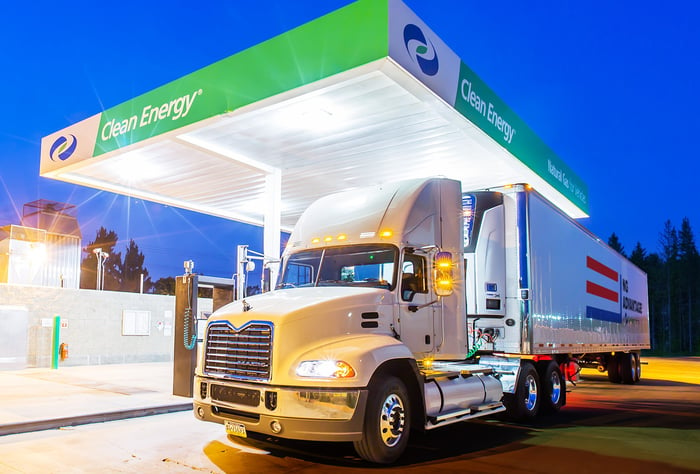 The first thing you may be wondering is why anyone would even be interested in natural gas fuel when there's already plenty of oil-based diesel fuels around, not to mention green "biodiesel" options and zero-emission battery technology.

However, for heavy-duty vehicles, many of those options don't exist or aren't feasible. Biodiesel, made from fats, oils, or recycled restaurant grease, is usually used as a fuel additive. The most common biodiesel fuel, B20, contains 20% biodiesel and 80% petroleum diesel.

Battery-powered semis haven't hit the mass market yet, despite plans by Tesla's Elon Musk to begin producing one in 2019; also, batteries' lengthy recharging time makes them unsuitable for some heavy-duty vehicles like city buses. Heavy-duty hydrogen fuel cell vehicles seem even further from mass-market production. That means, when it comes to heavy-duty vehicles, the options right now are gas- or oil-based fuels.

Natural gas is cleaner burning and much cheaper than oil, so companies looking to cut their vehicle fleet emissions really only have one alternative. And when they fill up their vehicles with compressed natural gas (CNG) or liquefied natural gas (LNG), Clean Energy Fuels is likely to get their business. The U.S. Department of Energy estimates that there are 1,075 natural gas fueling stations in the U.S. Clean Energy owns or operates about 550 of them (more than half).

Clean Energy Fuels has also developed Redeem, a renewable natural gas-based fuel that's made from "organic waste from farms, landfills, and wastewater treatment plants." It produces 70% fewer emissions than regular diesel and is cheaper to boot. Plus, manufacturing it captures methane gas that would otherwise escape into the atmosphere.

Redeem has proven to be incredibly popular. In 2019, Redeem sales increased by 30%, and the company inked a seven-year deal with UPS to provide it with 170 million gallon-equivalents of the stuff. This trend, bulls would argue, is likely to continue, helping to reverse the gradual decline in revenue the company has experienced since 2015.

Along with this improved outlook, Clean Energy scored a $60 million windfall when, in December, Congress retroactively reinstated a tax credit for natural gas fuels all the way back to the beginning of 2018 -- and extended it through 2022. That infusion of cash, coupled with Clean Energy's successful reduction of its debt load by 84.8% over the last five years, means the company suddenly finds itself with a strong balance sheet and a tax credit to help it over the next two and a half years.

Although the coronavirus pandemic affected Clean Energy's operations, many of its customers -- freight shippers and garbage truck operators, for example -- were considered essential and continued filling up in Q1, and they will likely continue to do so in the near term.

I'm always skeptical of a company that seems to have been on the cusp of outperformance for years but continually comes up short. That's been Clean Energy Fuels. While the company has consistently grown its fuel volumes and its station count, it's seen steadily dwindling revenues, and it only became profitable on a trailing-12-month basis in Q4 2019...for the first time since 2017.

True, the company has mostly been cash-flow positive since 2016, but it's unclear how well cash flow will hold up during the pandemic. Cheap oil prices, especially if they persist for months or years, may also hamper the adoption of natural gas vehicles. Plus, battery-electric vehicles are spending big money on upgrading their technology. If they can work out some of the drawbacks such as lengthy charging times, battery-powered fleets may leave natural-gas-fueled vehicles in the dust.

Clean Energy Fuels is far from a sure bet. As a longtime underperformer that has only recently returned to profitability, there's plenty of risk for investors here.

However, the company does now seem to have a hot product in Redeem, along with a much-improved balance sheet and a couple of profitable (albeit barely profitable) quarters under its belt. With an enterprise value-to-EBITDA ratio of just 4.5 -- at the low end of its historic range -- and a dirt-cheap share price, investors who don't mind some risk may (finally) start to see a payoff from Clean Energy Fuels.