Please ensure Javascript is enabled for purposes of website accessibility
Log In Help Join The Motley Fool
Free Article Join Over 1 Million Premium Members And Get More In-Depth Stock Guidance and Research
By Dave Kovaleski – May 25, 2020 at 8:36AM

It's one of Berkshire Hathaway's largest holdings.

Bank of New York Mellon (BNY -1.29%) is not your typical bank in that it is not a commercial bank that relies on loans for income, or an investment bank that facilitates mergers and acquisitions, among other roles. BNY Mellon is a custody bank, which means it holds and safeguards financial assets for primarily large institutional clients, such as mutual fund companies and pensions. BNY Mellon is the largest custody bank in the country with $35 trillion in assets under custody, ahead of its main competitor State Street (STT -0.27%).

As a custody bank, BNY Mellon makes most of its money from fees charged for holding assets. It also has a smaller investment management arm. Thus, its revenue stream is fairly stable, and it has less risk than other types of banks, which showed in the volatile first quarter.

Custodian cleans up in Q1

Unlike most banks, which took losses in Q1, BNY Mellon saw a 4% increase in net income year over year to $944 million and a 12% increase in earnings per share to $1.05. The company had $4.1 billion in revenue in the first quarter, a 5% increase over the first quarter of 2019. That was driven by a 10% increase in fee income due to elevated transaction volumes and heightened volatility. 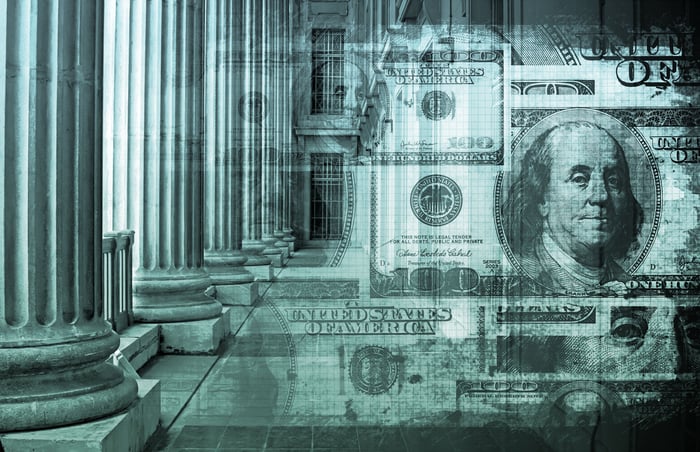 The investment management side of the business saw revenue decline 4% to $898 million in the quarter and net income drop 27% to $194 million. That was mainly from a 3% decline in interest revenue from the 0% interest rate environment. Earnings were also hurt by a 4% increase in non-interest expenses and money set aside from provision of credit losses.

However, only about 20% of BNY Mellon's revenue comes from the investment management side of the business; the lion's share, around 80%, comes from the more stable custody business. That will serve the bank well through this impending recessionary period. Also, the company is well-capitalized with a high common equity tier 1 ratio of 11.3% and a liquidity coverage ratio of 115%. Both of these metrics measure how much liquidity a company has to weather market stress, and both of these numbers are well above average.

But the investment management arm could get a revenue boost from a new service released in May called BNY Mellon Investor Solutions, a platform to provide institutions with asset allocation, manager selection, and account servicing.

Berkshire Hathaway (BRK.A -0.83%) (BRK.B -0.40%) CEO Warren Buffett has been shedding shares in bank stocks lately, including BNY Mellon. But his reasoning likely stems more from regulatory reasons as opposed to a lack of faith in the long-term prospects of the company, as my colleague Sean Williams explained in a recent article.

In April, Buffett sold about 1% of his roughly 89 million shares in BNY Mellon, most likely in order to get under the 10% ownership threshold. When you own 10% or more of a company, there is greater federal oversight. It had previously been under 10%, but a $3.9 billion stock buyback program announced last year may have pushed Berkshire Hathaway's ownership back over 10%. Still, BNY Mellon remains one of Berkshire Hathaway's largest holdings.

And the Oracle of Omaha remains a fan of bank stocks, as he told shareholders at a gathering earlier this month.

That is another good reason BNY Mellon is a bank stock to buy and hold for the long term. It is a market leader in a stable business with very few competitors and a difficult barrier for entry. Sounds just like a stock Buffett would love.

Bank of America's Billion-Dollar Judgement Day Is Only Days Away