Please ensure Javascript is enabled for purposes of website accessibility
Log In Help Join The Motley Fool
Free Article Join Over 1 Million Premium Members And Get More In-Depth Stock Guidance and Research
By Billy Duberstein – May 25, 2020 at 9:15AM

Pinduoduo is emerging as an e-commerce powerhouse amid COVID-19 and renewed trade tensions.

Last week was a terrible one for Chinese tech stocks, as the U.S. Senate passed the Holding Foreign Companies Accountable Act (HFCA). If passed by the House of Representatives and then signed into law, the new act could mean Chinese stocks will be delisted from U.S. exchanges, should companies choose not to adhere to the law’s new requirements. The new rules would include certifying that the company is not controlled by a foreign government and would also allow an American audit firm to certify any listed company’s financials.

The swift and somewhat unexpected passage led most large-cap Chinese tech stocks to decline for the week -- with one very notable exception: 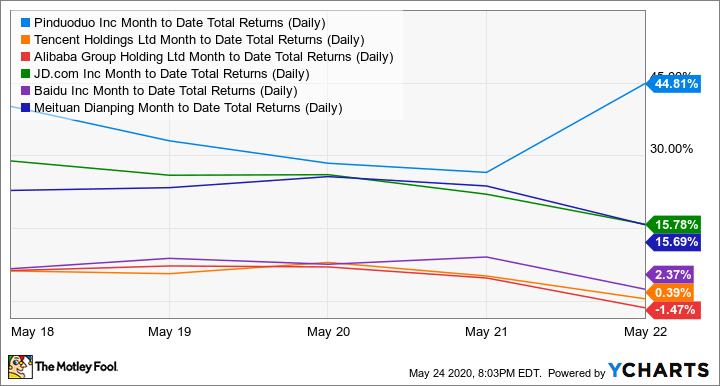 So, what did Pinduoduo (PDD 1.02%) do so right, where other big Chinese tech names faltered amid the renewed U.S.-China trade tensions? 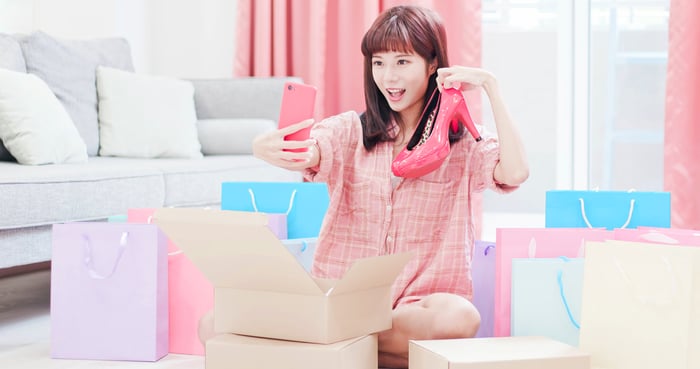 On Friday, Pinduoduo reported its first-quarter earnings, sending shares up a whopping 14.5% on the day. This outperformance was on top of an already strong recent relative performance, taking the company’s month-to-date returns to 45% and its year-to-date returns to an astounding 81.7%. 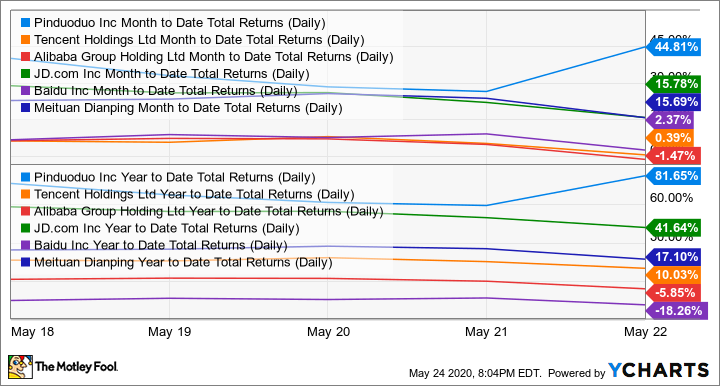 Though the company definitely received a jolt from earnings, you can see that Pinduoduo had already been doing quite well in the first half of 2020. That's probably because Pinduoduo’s business model is ideally suited for the current stay-at-home environment. As opposed to established e-commerce leaders Alibaba (BABA 0.14%) and JD.com (JD 1.97%), Pinduoduo is almost exclusively a discount site, offering low-priced deals to penny-pinching consumers when they link up and buy in groups, allowing for bulk-buying, and thus lower prices to each individual. Social media plus low-priced e-commerce equals a wining formula in normal times, but especially so during a pandemic.

On top of that strong base, investors were clearly impressed by Friday’s numbers:

At first, you might wonder why Pinduoduo’s stock surged so much. After all, those are some big and growing net losses, and while a 44% revenue growth rate is nothing to sneeze at, that rate was well below the fourth quarter’s 91% growth.

However, Pinduoduo's revenue and net losses were somewhat skewed by the unique factors in a quarter marked by countrywide lockdowns, depressing big-ticket buying and limiting some ability to ship packages.

Pinduoduo makes most of its revenue from merchants that market on its site, not from transaction fees, and management decided to give many merchants a break on fees and logistics costs, especially small and medium-sized businesses. CEO Colin Huang explained:

We proactively reduced advertising fees charged to merchants, provided incentives for those fulfilling orders during [the] outbreak, and directed free traffic to medical supplies and household items that our users needed the most while under quarantine. In addition, we subsidized medical products such as mask and disinfectant to help counter price spikes, due to the supply-demand imbalance. We also defrayed part of the logistics costs. These initiatives resulted in a lower revenue as a percentage of our GMV and a higher cost of goods sold during the first quarter, but it was the right thing to do, I believe.

Yet while Pinduoduo didn’t fully monetize its traffic, some underlying metrics came in quite strongly. Obviously, 108% GMV growth over the trailing 12-month period is incredibly strong, especially since shipping was challenged during the quarter, and since Chinese overall retail sales were down a whopping 19% in the quarter. While the company didn’t disclose single quarter GMV growth, one analyst on the conference call put first quarter GMV growth at 99%.

Yet even in the challenging quarter from a revenue perspective, Pinduoduo decided to spend normally on sales and marketing and R&D, aggressively investing on new features like live streaming video to help merchants better engage with consumers. That helped out overall engagement with the platform, with the ratio of monthly active users to total active buyers surging from 65.4% in the first quarter of 2019 to 77.6% in the first quarter in 2020.

Can the great numbers be trusted?

Obviously, with a lot of negative press surrounding Chinese companies in the wake of the Luckin Coffee (LKNC.Y -0.71%) scandal and the Senate passage of the HFCA last week, some might be wondering about the integrity of Pinduoduo’s numbers and management. Huang also sought to tamp down these concerns, saying that Pinduoduo had gone public perhaps earlier than it could have, basically saying that the transparency involved in being a public company helps foster openness and transparency, and reiterating his commitment to those ideals.

Of course, being public didn’t stop Luckin from faking sales. Still, Pinduoduo is probably not faking revenue, given the huge revenue deceleration during the quarter. In addition, Pinduoduo is backed by internet giant Tencent (TCEHY 3.24%), which has never had any sort of questions over its accounting.

If you trust Pinduoduo’s management -- and as of now, I don’t see any reason you shouldn’t trust it any more than any other large Chinese stock -- then it certainly looks like a winning player, given that it’s business model is almost ideally-suited to today’s stay-at-home economy. Management also said sales trends and marketing commissions had recovered strongly since the middle of March, meaning continued strong results should be expected as 2020 progresses.