Please ensure Javascript is enabled for purposes of website accessibility
Log In Help Join The Motley Fool
Free Article Join Over 1 Million Premium Members And Get More In-Depth Stock Guidance and Research
By Rich Smith – Updated May 22, 2020 at 11:47AM

A new law working its way through Congress could ban the trading of shares in Chinese companies altogether.

If you do, enjoy them while they last. On Wednesday, the U.S. Senate passed -- unanimously -- a bill that aims to ban IPOs by Chinese companies on U.S. stock markets, and that could even force Chinese companies already listed on the Nasdaq and NYSE to delist their shares and exit the U.S. 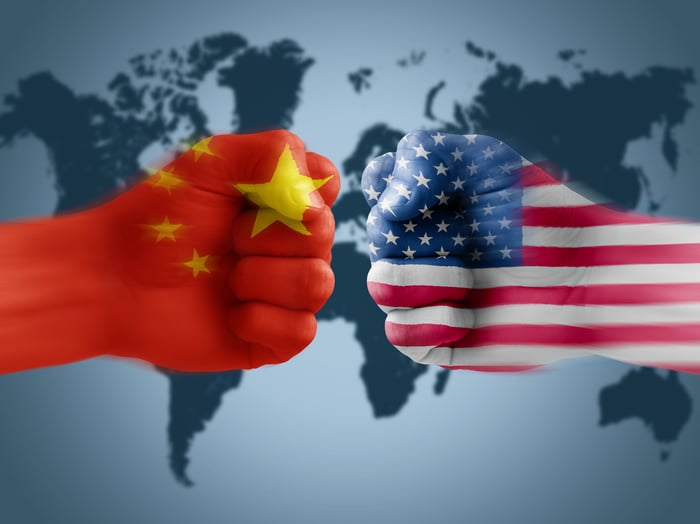 The Holding Foreign Companies Accountable Act (HFCA), if it is next passed by the U.S. House of Representatives and signed into law by President Trump, will have two main requirements:

Seeing the writing on the wall, Nasdaq (NDAQ -0.75%), which initially opposed HFCA, is already contemplating new regulations that will, among other things, tighten audit standards on new IPOs.

And even before those regulations go into effect, at least one Chinese company -- Baidu, which lists on the Nasdaq -- is responding to the legislation and the Nasdaq's plans. On Thursday, Reuters reported that Baidu "is considering delisting from the U.S. Nasdaq."

What the government says that means

It's not hard to understand Congress' motivation behind this law. Over the past three months, Chinese coffeehouse chain Luckin Coffee (LKNC.Y 0.55%) has seen 96% of its stock market value vaporized -- not because of coronavirus, but because the company was caught fabricating sales to make its business look like more of a growth company than it really was.

Shareholders howled, and Congress responded with this new HFCA Act, promising that it will improve "investor protection," ensure foreign companies are "transparent in their reporting" and thus save investors "a lot of money" -- says White House economic advisor Larry Kudlow, who supports the legislation.

Of course, that could be the result... if China plays ball.

But here's the thing: According to ChinaLawBlog.com, a service of law firm Harris Bricken, "the likelihood that the Chinese government will comply with this demand is at most two percent." And assuming China does not comply, that means that "all Chinese companies currently listed on the U.S. markets will be delisted and no future listings from Chinese companies will be permitted on the U.S. markets."

For investors interested in buying into the hottest Chinese IPOs -- companies like TikTok owner ByteDance for example, which might eventually want to do a U.S. listing -- passage of HFCA would be a huge disappointment. For investors who already own shares of the major Chinese tech stocks like Baidu, Alibaba, or JD.com, however, HFCA could be catastrophic.

The Wall Street Journal, which calls HFCA a "nuclear option," notes that passage of the law "would require the SEC to prohibit trading in any shares" that fail to meet the law's requirements -- which is to say, potentially all Chinese stocks. Nasdaq says passage could "torch" the value of "around $1.8 trillion" worth of Chinese stock, which would no longer be nearly as easy to trade in the U.S.

Sure, stocks delisted from the Nasdaq in response to HFCA would still be owned by their shareholders -- they won't just disappear. And ordinarily, delisted shares from a major exchange would still be tradeable on the U.S. over-the-counter market (OTC), albeit with less liquidity and at lower prices than the shares would fetch when listed on more reputable platforms such as the Nasdaq or NYSE.

However, in this instance, the legislation blocks trading on both levels of exchanges:

“(i) on a national securities exchange; or

“(ii) through any other method that is within the jurisdiction of the Commission to regulate, including through the method of trading that is commonly referred to as the ‘over-the-counter’ trading of securities.

Hopefully, cooler heads will prevail and Congress will not put investors in that fix. However, the potential risk that this legislation poses is likely enough to depress the value of Chinese shares in the near term. If HFCA nears passage in the House, worry could turn quickly to panic, as investors rush the exits en masse to avoid getting caught holding Chinese shares... and having nowhere to easily sell them.

Rich Smith has no position in any of the stocks mentioned. The Motley Fool owns shares of and recommends Alibaba Group Holding Ltd., Baidu, JD.com, and Luckin Coffee Inc. The Motley Fool has a disclosure policy.