Please ensure Javascript is enabled for purposes of website accessibility
Log In Help Join The Motley Fool
Free Article Join Over 1 Million Premium Members And Get More In-Depth Stock Guidance and Research
By Howard Smith - May 26, 2020 at 3:24PM

The comfort footwear maker grew sales in March and April, even with many stores closed.

In general, retail hasn't held up well during the shelter-in-place portion of the ongoing COVID-19 pandemic. But Crocs Inc. (CROX -2.75%), maker of foam comfort clogs, has bucked the trend as one of the retail success stories this year. It may be because some people think they are cool again, or because people just want comfort in the confines of their homes.

But market research firm NPD Group, which tracks footwear brands, showed Crocs as the only brand to grow sales in March 2020. In April, it was joined only by Decker Outdoor's (DECK -0.99%) boot brand Uggs, in growing sales, among the top 30 brands tracked by the firm, according to The Wall Street Journal. 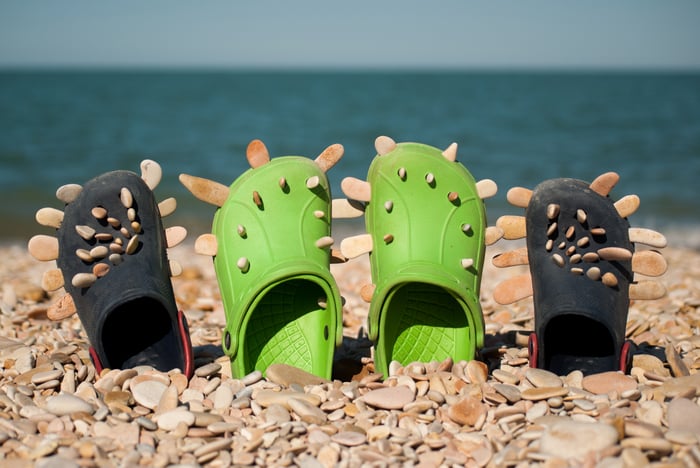 Crocs announced it was closing its North American retail stores on March 17, 2020 in response to COVID-19. At some point during the first quarter, many of the 367 company-owned stores, as well as partner stores and wholesale customers' stores were temporarily closed. But March sales still grew 14% year over year, and April Google searches of the brand reached a 15-year high, according to the report.

The resurgence in Croc's business started before people were confined to their homes during the pandemic. In 2019, the company reported record sales of $1.23 billion, and operating margin more than doubled.

According to the Journal report, Crocs CEO Andrew Rees, who took the position in 2017, said: "When a brand is going in the wrong direction, it's like a supertanker, right? It takes a long time to turn it around." The company closed some stores, turned to online retailers, and revamped its marketing to initiate the success it is currently experiencing.

Why Crocs Stock Is Rising Today