Please ensure Javascript is enabled for purposes of website accessibility
Log In Help Join The Motley Fool
Free Article Join Over 1 Million Premium Members And Get More In-Depth Stock Guidance and Research
By Harsh Chauhan – Updated May 26, 2020 at 4:43PM

Synaptics' long-term prospects appear to be solid despite some near-term challenges.

Synaptics (SYNA -0.24%) looked like a top stock at the beginning of the year thanks to a bunch of tailwinds in the smartphone, PC, and Internet of Things markets. But the chipmaker has found the going tough so far in 2020 as the novel coronavirus outbreak has dented its momentum, as evident from the company's latest quarterly results.

When Synaptics released its fiscal 2020 third-quarter earnings on May 7, its revenue of $328.1 million missed the lower end of the $330 million to $350 million guidance range. The top line fell 2% year over year as supply chain disruptions caused by the pandemic led to production delays for Synaptics' customers.

But a closer look at the quarterly results reveals that the company is doing well despite these coronavirus-related headwinds.

Synaptics' results weren't all that bad

In fact, Synaptics' third-quarter non-GAAP gross margin exceeded the company's own expectations thanks to its cost-saving moves and a favorable product mix. It now expects further acceleration in its gross margin this quarter, to a range of 45% to 47%.

Synaptics' gross margin growth can be attributed to the company's strategy of focusing on high-margin products such as OLED drivers and controllers. It recently completed the sale of the mobile LCD TDDI business for $120 million to focus on the premium end of the smartphone market. This looks like the right move as smartphone OEMs (original equipment manufacturers) are transitioning from LCD displays to OLED.

Synaptics has shifted its focus toward making display drivers and touch controllers for OLED screens, and top smartphone players are already using its solutions in their flagship smartphones. The chipmaker anticipates that another 10 flagship and mid-range smartphones using its OLED touch solutions will hit the market in 2020.

This bodes well for Synaptics' smartphone business that supplied 54% of the total revenue last quarter. However, a change in launch schedules of the new smartphones that Synaptics is counting on could dent the momentum of its mobile business.

But that shouldn't be a deterrent for investors with a long-term investment horizon. The demand for OLED displays is expected to increase substantially in the coming years, which should expand Synaptics' addressable market. According to a third-party report, demand for flexible displays such as OLED and AMOLED is expected to increase at a compound annual growth rate of nearly 26% through 2025 to a size of $31.5 billion.

So, even if Synaptics' near-term prospects take a hit on account of weak smartphone sales, investors shouldn't forget that the long-term opportunity is likely to remain intact. More importantly, the company looks poised to weather the negative effects of the pandemic.

Synaptics generated 24% of its revenue from the PC business last quarter. The good part is that the company is witnessing robust growth in this segment as an increase in telecommuting has led to a bump in demand for PC products. As a result, the contribution of the PC business to Synaptics' top line is expected to jump to 32% in the current quarter.

As a result, Synaptics should be able to mitigate the weakness in mobile to some extent, thanks to the strong performance of the PC business. The chipmaker has a robust balance sheet with $711 million in cash after the sale of its LCD TDDI business, and its cash flow and margins have been heading north for the past year. 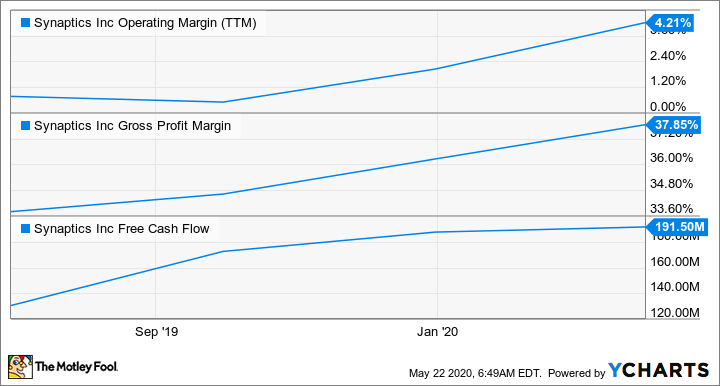 What's more, the company's fourth-quarter guidance isn't all that bad despite the negative effects of COVID-19. Management expects $275 million in revenue at the mid-point of its guidance range, down about 7% from the prior-year period. But as more OLED-equipped smartphones hit the market, the semiconductor company's business should start picking up the pace once again and pave the way for future growth.