Please ensure Javascript is enabled for purposes of website accessibility
Log In Help Join The Motley Fool
Free Article Join Over 1 Million Premium Members And Get More In-Depth Stock Guidance and Research
By Rich Smith - May 26, 2020 at 4:45PM

It was a long time coming, but on Monday, at long last, Virgin Orbit made its first official attempt to launch a rocket into orbit.

In October 2019, Virgin Orbit -- a company related to, but not part, of its more famous cousin Virgin Galactic (SPCE -0.46%) -- announced plans to launch a test rocket from its "Cosmic Girl" modified Boeing carrier aircraft "in about six weeks, eight weeks." As it turned out, the actual number was closer to 34 or 35 weeks, as a combination of intense devotion to making sure everything would go right, combined with a pandemic that went very wrong to delay Virgin's launch attempt. Regardless, after one final delay to a planned Sunday launch, Virgin Orbit was finally ready to go on Monday. 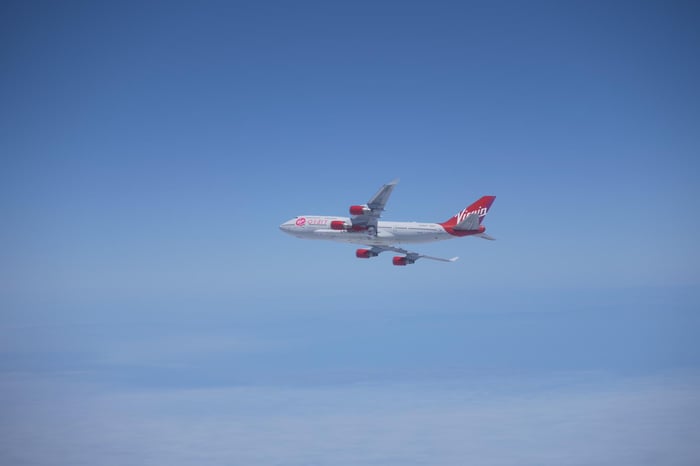 After taking to the air and maneuvering for launch, at 3:50 p.m. Virgin Orbit sent out its exultant tweet:

We've confirmed a clean release from the aircraft. However, the mission terminated shortly into the flight. Cosmic Girl and our flight crew are safe and returning to base.

As the company later explained, "LauncherOne maintained stability after release, and we ignited our first stage engine, NewtonThree. An anomaly then occurred early in first stage flight," however. It appears that the rocket's upper stage may have never ignited -- or perhaps never even separated so as to be able to ignite.

The good news: At least no customer lost a satellite as a result of the failure. Uncertain that it would succeed in its first launch attempt, Virgin Orbit had loaded a dummy payload aboard LauncherOne for this maiden flight. There is no word yet on when Virgin Orbit might make a second attempt.